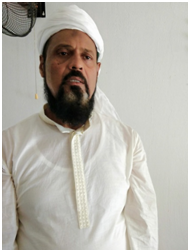 The story of the Ka'aba 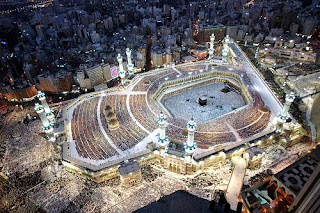 Mecca, the Holy City is the busiest city in Saudi Arabia. The Holy Mosque (Masjid al Haram) is located in Mecca. It is a city in the Arabian Peninsula 350 meters above the sea. The Ka’aba is in the middle of the Sacred Mosque. This mosque is located in a space called Bakka.

The date of its foundation goes back to the time of Hazrat Ibrahim (as), the Prophet (Nabi) and the Friend (Khalil) of Allah. It is in this city that the Holy Prophet of Islam was born. It is also the cradle of the revelation that welcomed the light of Islam and it is there that springs the Sacred Mosque, the first installed on earth for the men by virtue as it is evident from the words of the Most High (Allah): “The first House that was built for the people is that of Bakka (Mecca), blessed and a good direction for the universe.” (Al-Imran 3: 97)

It has been safely reported from Abu Dharr that he said, “I asked the Messenger of Allah (pbuh) about the first mosque on earth? He said, ‘The Holy Mosque’ and then I said to him, ‘Which one afterwards?’ He said, ‘The Al-Aqsa Mosque.’ I told him, ‘How much time has passed between the two?’ He said, ‘40 years old.’”

The Ka’aba towards which the Muslims of the East and West (all Muslims) turn for their prayers (to worship the Unique Lord of the Ka’aba), is approximately found at the centre of the Sacred Mosque. It has a height of 15 metres and takes the form of a large cube almost square. It was built by Hazrat Ibrahim (as) on the command of Allah the Most High. Allah the Almighty and Majestic says: “And when We appointed for Ibrahim the place of the House (the Ka’aba) saying to Him, ‘Do not associate Me with anything; and cleanse My House for those who circle around it, for those who stand up in prayer, and for those who bow and make prostration.’” (Al-Hajj 22: 27).

The term “bawwa’na” means: We directed it and made it available to it and gave it permission to build. In this regard, Allah the Almighty says: “And when Abraham and Ishmael raised the foundation of the House, [saying], ‘O our Lord, accept this from us! For You are the Hearing, the Knowing.’” (Al-Baqara 2: 128).
Read more »
Email ThisBlogThis!Share to TwitterShare to FacebookShare to Pinterest
Labels: hajj, History, Holy Prophet, Holy Quran, Ibrahim (as), Ka'baa, makkah, pilgrims, Umrah

A Dear Prayer for All Hajjis 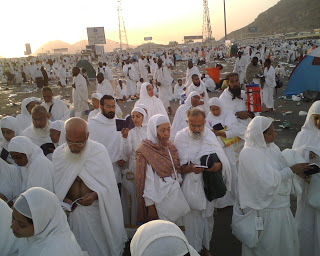 O Allah, the call has been given,
And Your servants are coming to You,
To Your Glorious & Holy House,
To accomplish that very deed which represents
The Ultimate proof of their love and submission to You.
Submission to You in all humility is what You seek,
And Forgiveness and Your Love and Mercy
Is what we seek;
Rush to Your servants, O Allah
And accept their Hajj;
Inspire their hearts to remain true to the promise of
Reform throughout the rest of their lives,
And O Allah open my way to You,
So that the treasures of Your Kingdom may be
Always at my reach,
To distribute to Your sincere and devoted servants.
May they also accede to Your nearness,
And taste Your Love and
Give them the ability,
To communicate with You,
Their hearts connected with You,
And Yours with them,
And enlighten them, O Allah
To be truly submissive to You,
In all aspects of the word;
A Muslim am I, O Allah,
By Your Grace and Mercy;
Bless my Muslim brothers, sisters and children,
Who have forsaken everything to come to
Your Holy Ka’aba,
To accomplish the fifth pillar of Islam,
To accomplish such a worship,
Which shall Insha-Allah see to their
Glorious elevation in Your Sight and Paradise,
Be it in this world and the hereafter,
Forever.
O Allah, accept this plea,
And bless us all in Your way,
Under Your righteous Guidance,
And cherished in Your everlasting love,
And protect us always from the accursed Satan,
And all forms of evils which exist within us,
And all around us. Ameen.

A Prayer at the Ka'baa Shareef 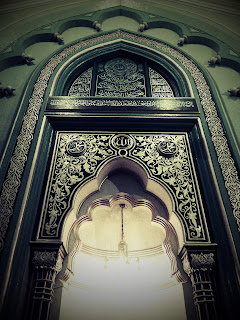 ‘The first House (of worship) to be established for all mankind was the one at Bakka. It's a blessed place; a source of guidance for all people; there were clear signs in it; it is the place where Abraham stood to pray; whoever enters it is safe. Pilgrimage to the House is a duty owed to God by people who are able to undertake it’. (3:97)

Remember the time when Abraham and Ishmael raised the foundations of the House, praying, ‘Our Lord, accept this from us; for You are the All-Hearing, the All-Knowing. Our Lord, make us devoted to You; make our descendants into a community devoted to You. Show us how to worship and accept our repentance, for You are the Ever Relenting, the Most Merciful’. (2:128-129)

The Promised Messiah, Al Imam Al Mahdi, Hadhrat Mirza Ghulam Ahmad (as) of Qadian (1835-1908 AD) never had the chance during his lifetime to visit Makkah to offer his obeisance at the holy Ka’baa Sanctuary. Yet, some of his disciples could make that sublime spiritual journey during his time, and one of them was Pir Munshi Ahmad Jan. When the Pir Saheb was about to go on Hajj pilgrimage in the year 1302 AH/ 1902 AD, Hadhrat Massih Mauod (as) gave him several instructions on fervent prayers to be invoked on his own behalf while at the Ka’baa Sheriff in Makkah. In this context, when the journey for Hajj pilgrimage was to take place, the Promised Messiah (as) wrote to Pir Saheb in a letter: 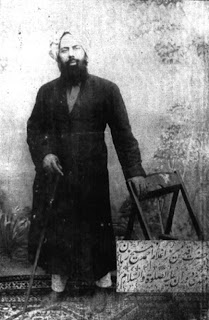 ‘Remember the request of my humble and unworthy being that when by the grace of Allah the Almighty you are granted the honour of visiting the House of Allah, please pray on behalf of this humblest of Allah’s servants with great humility and submission at that praiseworthy and blessed place in the following words:

‘O Most Merciful of all the mercifuls, a servant of yours –humble, unworthy, full of shortcomings, and unskilled—Ghulam Ahmad, who resides in the country of India, prays that:

O Most Merciful, be pleased with me.

Forgive my faults and sins, as You are Most Forgiving and Merciful.

Grant me the ability to do what pleases you greatly.

Create a separation between me and my self as East is separated from the West.

Let my life and my death and all my capacities be an offering in Your way.