‘Say A BIG NO to Birth Control’

The long term sustainability of the economic development models being pursued by various nations is under a shadow these days with multiple crises-economic, political, social and financial- afflicting even the affluent among the peoples and societies. Instead of addressing the glaring inequalities in income and wealth and the insane disparities in the resource distribution structures that under grid the modern economies, the priority of our finest minds seems to have been diverted to no less a thing than ‘playing’ God. How else would you explain the global focus on ‘birth control’ as the panacea for gross mismanagement of economies/ resource distribution patterns?! Alas, for a world that has lost its sense of proportionality and is out of ‘balance’, flawed logic, warped thinking and anti- natural policies seem to appeal more than ethical concerns.

To contain the many issues emerging out of the inequitable economic and social policies followed thus far, nations seem to have found a magical solution in population control/ birth control. Abortion and Birth Control as a conscious state policy to reduce population figures is antithetical to the spirit of life and natural growth and as such, against the Islamic values. In his Friday Sermon of June 15, 2012 Khalifatullah Hadhrat Munir Ahmad Azim Sahib of Mauritius (atba) explained at length the ethical teachings of Islam with special reference to marital life- the ways in which Islamic ethics seek to inject personal happiness, the joy of togetherness, emotional bonding and the bliss of progeny into the very special relationship between a man and his wife. Drawing on the fine metaphor of beautiful flowers, the Messenger of Allah of our times points out that children are the Roses in the garden of life and calls our attention to the traditions of the Holy Prophet (sa) who wanted to see hundreds of flowers to bloom in the garden of Muslim Ummah.

The Other Half of Women’s ‘Freedom’ 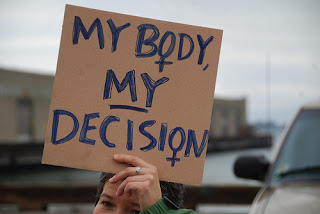 That sexual permissiveness is morally unacceptable may have been a part of the long-standing common sense in most societies. But, increasingly, such views are being challenged by people who brazenly and wantonly, ‘celebrate’ the cause of individual 'preferences' and identity 'orientations' by arguing that there is nothing deviant in being a homosexual or a lesbian for that matter. The fact is, world over, sexual permissiveness is increasingly gaining societal acceptance and public legitimacy. The language of human rights and basic freedoms are increasingly being deployed for the recognition and in the service of homosexual, bisexual, transgender and lesbian communities and also for legalising abortion and even prostitution. In this twisted world of legality,  the heinous practice of abortion is projected as a mere question of a woman’s basic right to reproductive choice.  Any perceived 'interference' by the society through regulatory laws/rules would be seen as a grotesque invasion of the right to privacy and self- determination in the private sphere!

In his Friday Sermon of June 08, 2012 Khalifatullah Hadhrat Munir Ahmad Azim Sahib (atba) of Mauritius took note of these larger societal trends in the backdrop of the recent policy debates in Mauritius on the issue of legalizing abortion.  The Divine Messenger of our times points out that all of these have profoundly negative implications for the orderly development and long-term health of societies and the human civilization's onward march.

Brothers and sisters, you know that since Friday 04 May 2012, in the Mauritian Parliament and even before this, the government has taken the decision to legalise abortion, but after debates on the question, they (that is, the government) persisted to go forward with the legalisation of abortion in specific cases and this has been published in the newspapers here in Mauritius. Each time that the government has gone against religion and the religious leaders, and each time that the subject of abortion has become the talk of the day, as the Khalifatullah of this era, like in the past, I shall continue to rise against all things which are against the divine teachings and which are encouraging all the more the spread of sins.

Immorality is annihilating our youth, be it in Mauritius and the world as a whole. Due to the fact that some 20% of women do not want children, therefore accordingly (people of modern times or government) seem to think that abortion must be legalised. I warn you: Do not invite the punishment of Allah on this small island, and I warn also the other countries who have legalised (or in the process of legalising) abortion.
Read more »
Email ThisBlogThis!Share to TwitterShare to FacebookShare to Pinterest
Labels: Faith, Islam, Jamaat Ul Sahih Al Islam, Khalifathullah, Munir Ahmad Azim, women
Newer Posts Older Posts Home
Subscribe to: Posts (Atom)