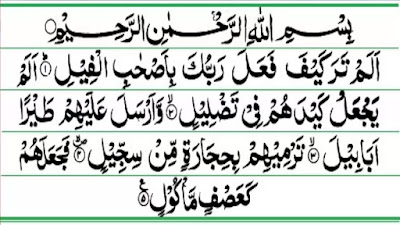 1. In the Name of Allah, the Most Gracious, the Most Merciful.
2. Have you not seen how your Lord dealt with the companions (i.e., owners) of the elephant?
3. Did He not make their treacherous plan go astray?
4. And He sent against them Birds in flocks,
5. Striking them with stones of hard-baked clay.
6. Then did He make them like an empty field of stalks and straw, (of which the crops) has been eaten up.

The Fate of Hubris: A Lesson from History

This Surah was revealed at Mecca in the early days of the prophethood of Hazrat Muhammad (pbuh). It speaks about the event that took place in the year of the birth of the Holy Prophet (saws), around the year 570 of the Christian calendar. Yemen at that time was under the control of the Abyssinians who were Christians and the latter had driven out the Jewish government that was in power at that time. Abraha Al-Ashram was the governor or Viceroy of Abyssinia. The thirst for power led him to self-proclaim himself king. With a desire to finish Iman (faith), he had walked towards Mecca with his army to attack and destroy the Ka'aba. He had several elephants in his army. But Allah (swt) demonstrated His miracle and sent His curse and wrath upon this army. Those who guarded the Ka'aba were very frightened because the Abyssinian army was very strong, but Allah (swt) sent a rain of rocks over them through birds that destroyed this great army. These rocks opened their flesh and this triggered an epidemic like plague among the entire army and destroyed them all.

This is a lesson for man, teaching him never to be tempted by the power of this temporal world and not to believe that he is superior in authority to other people and he should not also think that he can do all that he wants, even to the extent of going against faith and the will of Allah, for never will Allah allow these kinds of people to live if they try to hurt His honour and go against His will.


The attack that Abraha had made against the Ka'aba, the sacred house of humanity that Allah built for Himself so that mankind finds faith, peace and Allah Himself through rites which Allah has taught them; This attack has itself turned against that very ignorant one (i.e. Abraha and his army) and he had paid dearly for his evil deed by death and the penance of the hellfire. This Surah shows that Allah is All-Seeing and All-Hearing and He manifests His power when it is necessary and can destroy an army when man believes that He is the most powerful and thinks that he is god on earth. This Surah shows that man is weak and when Allah catches him for his sins, well He catches him indeed very firmly. Allah has made us understand this very well in the Holy Quran.

“Sanas tadrijuhum min haysu laa ya-lamuun” - We shall gradually (step by step) seize them with punishment in ways they perceive not. (Al-Arraf 7: 183).

Therefore man shall never be able to go against the will and decree of Allah and if he persists in his ignorance and thus defies Allah in this matter, then his consequence will be very serious and Allah will exterminate such a person on earth whether physically or spiritually and He shall make this person and other people as well see the punishment He has reserved for the impudent in this very life. The miracle of Allah comes in situations of distress and Allah shows to the pious and intelligent people all that He can do. He protects whom He wants and destroys whom He wants. He destroys especially those who defy Him and His laws that He has established since the creation of the earth.

In the SURAH AL-FIL which I have recited before you, Allah says:

Verse 2 : ‘Alam tara kayfa fa-‘ala Rabbuka bi-‘As-haabil-FIIL? - Have you not seen how your Lord dealt with the companions (i.e., owners) of the elephant?

(a) “Have you not seen?”, that is, the mental ability to see. This incident happened before the advent of Islam and in the year of the birth of the Holy Prophet (pbuh). The Holy Prophet (pbuh) did not witness this event, but this event marked history and there is a moral behind it and Allah makes His Messenger understand that this too is a sign and a miracle of Allah because Allah teaches him things that happened before, things which he did not know, and Allah makes him understand that this event has marked history and will remain engraved for eternity in the Quran. Moreover, there is therein food for thought, so that people meditate on all that has happened in the past and learn from it that they must never rise against the will of Allah and, If they stand up against the will of Allah, then it is like they have rebelled against Allah Himself.

The people of the Elephant were the troops of Abraha's army, that Abyssinian chief who sought to invade Mecca with his army and came with elephants who were present in that army.

The miracle that was manifest was that Allah had sent birds that had in their possessions rocks (or bricks) that they had cast in large numbers on this "so-called" powerful army and this triggered an epidemic that had ravaged and destroyed the whole army.

Verse 5 : Tarmiihim-bi-hijaaratim-min-sijjiil. - Striking them with stones of hard-baked clay.

The word “sijjiil” appears in another verse of the Quran (Al-Hijr 15: 75): “Alayhim hijaar tam min sijjiil - (We) rained upon them stones of hard clay.” It is these kinds of rocks which have been made with terracotta (fired earth/ clay) or they are rocks that are as hard as terracotta and these rocks form part of the miracles that history has retained.

Verse 6 : Faja-‘alahum ka-‘asfim-ma’-kuul. - Then did He make them like an empty field of stalks and straw, (of which the crops) has been eaten up.

A field where people have eaten all, leaving nothing, is a dead and useless field. Similarly, Allah has reduced Abraha's army as a dead and useless field, where the plan they had in mind to destroy the Ka'aba did not succeed. There is in this a double lesson to be drawn as I mentioned at the beginning (of my sermon), where in the time of the Holy Prophet (pbuh) it meant that all who will become the enemies of Allah and His Messenger and make plans to destroy the Holy Prophet (pbuh) and the plans of Allah, then Allah the Almighty will catch them and reduce them to dust as He did to the armies of Abraha.

For other people who will come through time, this also means that if they take themselves more superior and more powerful than Allah and they seek to destroy the things that Allah has ordained a perpetual existence, be it on earth, or spiritually, and they seek to thwart the holy plans of Allah, Allah will seize them severely and destroy them.

Today you are living in a time when Allah has sent one of His chosen servants to preach His Message (to warn and to give the good news too). There are people and countries such as America who take themselves as gods on earth and they intend to annihilate Islam as in previous eras. But today we see how Allah is destroying them little by little until the great destruction strikes them and when it comes, there will be no one in the world who will have the capacity to stop this destruction. Verily Allah knows who are those who work for His plan and who are those who work against His plan. Surely the plan of criminals will never materialize.

I thus conclude (this sermon) with these verses of the Holy Quran and some advices:

“Lasta alayhim-bi-Musaytir”
You are not in any way a dominator over them,

“Illaa man-tawallaa wa kafar”
However, he who turns away and disbelieves,

May Allah preserve you all so that you never turn your back to His messages and His messenger in this century, and also for all peoples who will come after, any time Allah will send among you a man (a person) with the Ruh-il-Quddus (The Holy Spirit, the Divine Revelation) as His Chosen One to revive the Quran and preach Islam, to bring you back to Sahih al Islam, then you must not be arrogant and try to put obstacles in the path of the Elect of Allah and the sincere people because they are the ones who will have victory through the victory of Allah.

Today, it is in an exceptional century that you are all living, a century when a Chosen One of Allah is alive and is present before you to lead/ direct you to Him. Whoever profits/ benefits these blessings fully, then they will be blessed. But as for their children and the children of their children who will be born later, I warn them against defying the divine laws. You have the task of keeping alive the Sahih al Islam, Islam in its authenticity, the true teachings of Allah, the true teachings of the noble prophet Hazrat Muhammad (pbuh) that this humble servant who is present before you has come to revive.


Then, tomorrow after me, it is you who will have the duty to keep these teachings alive and with humility, because the boasters/ arrogant/ those who are filled with vanity, Allah will not accept them. Allah loves those who have pure hearts, who are honest and sincere to His cause and who are humble and good and who are not thirsty for the power and wealth of this world. Insha-Allah, it is my desire and prayer (to Allah) that the Jamaat Ul Sahih Al Islam and the true followers of this humble servant of Allah who is present before you today you remain spiritually alive until the last day of Judgement and Insha-Allah, with your devotion, we will succeed with the immense help of Allah to bring back the Ummat-e-Wahida (Only one community of believers) only for the pleasure of Allah, to re-establish the Izzat (honour) of Allah and His Tawhid (Oneness) on earth. Insha-Allah, Ameen.