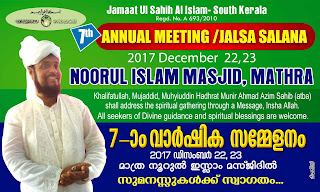 Jamaat Ul Sahih Al Islam, Kerala (South) observed the 7th Jalsa Salana (Annual Conference) at the historic Noor'ul Islam Masjid, Mathra on December 22-23, 2017. On the occasion, our beloved Imam, Muhyi-ud-Din Al Khalifatullah Hadhrat Munir Ahmad Azim Saheb (atba) of Mauritius addressed a special message to the members of the Jamaat in this part of the world.

In his speech, Hadhrat Saheb (atba) underscores the significance of 'Taqwa' in our spiritual life. A believer always need to strive for perfect congruence between  public declarations of faith and the actual deeds on everyday life. And yet, as a fallible human being, s/he is prone to be tempted and distracted into sins by "Satan and his army". By being aware of God's laws and regulations and restrictions in the affairs of this world; and through seeking Divine forgiveness after misdeeds are committed and by adopting 'Taqwa' as the true commander of the Heart in all affairs, a believer can make a good beginning in the quest for the True Beloved, confirms Hadhrat Saheb (atba).

Read the Special Message below:

Race with one another towards Forgiveness from your Lord and towards a paradise the width of which spans the heavens and the earth. It has been prepared for the God-fearing; Those who spend (freely), whether in prosperity, or in adversity; who restrain anger, and pardon (all) men; for Allah loves those who do good - and those who, when they happen to commit a shameful act or wrong themselves, remember Allah, then, seek forgiveness for their sins - and who is there to forgive sins except Allah? And who do not willfully persist in the wrong they did. For such the reward is forgiveness from their Lord, and Gardens with rivers flowing underneath - an eternal dwelling: How excellent a recompense for those who work (and strive)! (Al-Imran, 3: 134-137). 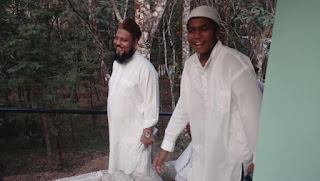 It is indeed a pleasure for me to address you few words on the special occasion of the 7th Jalsa Salana, Kerala - South Zone, being held at our Noor’ul Islam Masjid in Mathra.

Like I have always and consistently advised all my disciples and truth seekers worldwide, it is absolutely necessary for a true believer in Allah to conform his life with ISLAM, i.e. the true way of life, by being a true Muslim and complying to all precepts of Islam. That is why, the Jamaat Ul Sahih Al Islam should always promote the true Islam, and mould our members, my humble disciples, and those who shall one day come after me, to be true examples of Islam for their own selves and their families, but also as role models for the rest of mankind.

As the year draws to a close, we see many people spending money, either exorbitantly or in useless things, and they waste their money on alcoholic beverages and amusement. One of these waste is the purchase and lighting of firecrackers. 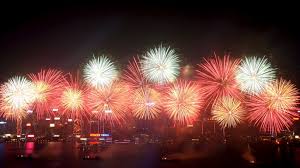 The Beauty of Patience: Yusuf (as) in the Qur'an

Patience of the Prophets

Since the dawn of time, Allah has sent prophets in all ages and to all the nations of the world. A line of prophets came, all ennobled by the Messenger of Messengers, the Beloved Muhammad (pbuh), all of whom had endured countless hardships, all of whom had experienced the greatest difficulties during their prophetic mission. All of them had to face the fiercest and most murderous enemies, who erected themselves as a metal barrier on the way of these prophets during their stay on this earth.

But all had the same feeling, the same reaction: patience, trust in Allah Ta’ala and faith. In addition to the prophets, some of their wives have had the misfortune to experience the worst difficulties too. They also showed an unshakeable patience.

Today I will relate to you a little about the sad story of Hazrat Yusuf - Joseph (as). Being a young and handsome boy, he was betrayed by his own brothers and then by the wife of the Prime Minister of the King of Egypt. Imprisoned, he lost neither hope nor patience. His father Yaqub - Jacob (as) had to suffer the worst difficulties because of the abuse caused to his beloved son. He also showed patience and guided by his faith (Iman) and the divine revelations, he relied on Allah Ta’ala. This patience led father and son to reason, victory and family reconciliation.
Read more »
Email ThisBlogThis!Share to TwitterShare to FacebookShare to Pinterest
Labels: Al Aziz, dreams, Egypt, Hazrat Yusuf, Muhammad, patience

Divine Message and the Fate of Choices

Acceptance & Rejection of the Divine Message

The Holy Quran makes religious progress dependent upon revolution. It says: And in no way do We send the Messengers except as bearers of glad tidings and as Warners. So those who believe and reform themselves, upon them shall come no fear nor shall they grieve. But as for those who reject Our signs, punishment will touch them for their defiant disobedience. (Al-Anam 6: 49-50). 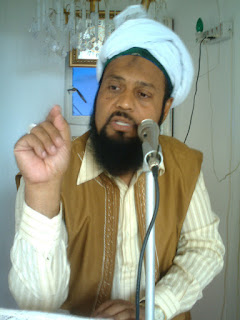 That is, whenever We send a Messenger, he always proclaims two things: (i) he condemns the existing order to death; (ii) and in regard to the system he originates himself he proclaims, without ambiguity that it would be established in the world in its purity, without change or adjustment under any pressure to make it acceptable to this or that people. Those who submit to the system, and mould themselves in conformity with its requirements, survive and prosper, but those who do not do so, they gradually fade out of existence.

When a revolution occurs in the religious sphere, in Islamic terminology it is called 'Qiyamah'. Another expression used for it is Khalq-us-Samawat-i-wal-Ardh, i.e. the creation of a new earth and a new heaven. Still another name for it in the language of the Holy Quran is Al-Sa'ah.

The word 'revolution' which is roughly translated from the Arabic term 'Inquilab' and described in the context which I just mentioned, refers primarily to the moral and spiritual reformation of oneself, not a political revolution to overthrow a government as may be popularly thought these days by the use of the word.

Hence, when a group of individuals or a society have reformed themselves, a revolution in the noble character of man and his dealings with other people and with God is observed. Thus, a condition in the world existed in which the reformation of oneself was demanded to set things right in the affairs of man.
Read more »
Email ThisBlogThis!Share to TwitterShare to FacebookShare to Pinterest
Labels: divine wrath, Heraclius, Holy Prophet, Islam, Message, Persian empire, rewards, Roman empire

Innal-Lillaahi wa inna ilayhi raajiuun.
To God we belong and to Him we shall return. 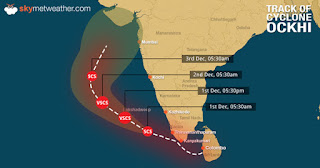 That’s the defining thoughts for everyone who face the trial of misfortune and loss.

Tragedy has come home to people in our land this week. Cyclone Ockhi, the most devastating cyclonic storm in the northern Indian Ocean region since 2015 has struck many lands in its tentacles: the coastal regions of Sri Lanka, the South Indian states of Tamil Nadu and Kerala, the Lakshadweep Islands, and also the Maldives. 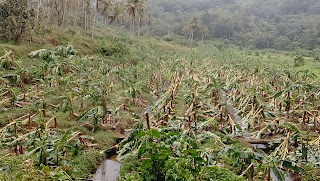 Nature’s fury in the form of bad winds and cyclonic storms has taken away the lives of scores of people; hundreds of fishermen are missing after the storms, with no information about their whereabouts and search and rescue operations by the Indian agencies still ongoing till now. Beyond the shattered lives, possessions and property worth millions and millions has been destroyed. The damage to electricity transmission lines, agricultural crops, roads and passageways will continue to leave a chain of negative effects on the everyday life world of the affected regions and peoples for the months to come.

'Yaum-un-Nabi': The Prophet as a Father

The Holy Prophet of Islam as a Father 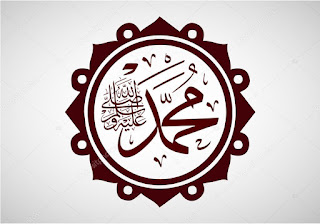 Today is Friday the 12 Rabi'ul Awwal 1439 AH. The majority of the Muslim World is celebrating Yaum-un-Nabi - the Day of the Prophet (pbuh), while others call it Milad-un-Nabi - the birthday of the Prophet (pbuh). While celebrating birthdays was not a Sunnah of the Holy Prophet Muhammad (pbuh), each Muslim must bear in mind that celebrations which resemble the practices of the non-Muslims (e.g. cake cutting and blowing on candle and making wishes, partying with dancing, music and alcoholic drinks etc.) are strictly forbidden in Islam.

As for us, we prefer to commemorate the Seerat-un-Nabi, i.e. the life story of the Prophet (pbuh) so that we may remind ourselves of his perfect character as a human being and prophet.

Muhammad literally means much praised. Even before he made claim to prophethood, his own people knew him to be truthful and trustworthy. The Holy Prophet of Islam (pbuh) was the father of three sons and four daughters. Two sons, Qasim and Abdullah, named in the family Tayab and Tahir were born from Hazrat Khadija. Another son, Ibrahim, later on, was born from Hazrat Maria, his Coptic wife (who later became Muslim). 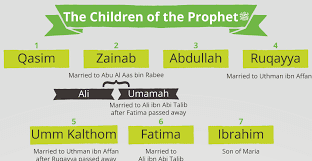 The first born was Qasim after whom, according to the Arab custom, the Holy Prophet himself was called Abul Qasim, i.e. father of Qasim. Qasim died at the age of two before the advent of Islam. Next to Qasim was his eldest daughter named Zainab. Next to her were daughters Ruqayya, Umme Kulsoom, and the youngest of all daughters was Fatima. The youngest offspring of the Holy Prophet and Hazrat Khadija was Abdullah, who passed away as an infant before the advent of Islam.
Read more »
Email ThisBlogThis!Share to TwitterShare to FacebookShare to Pinterest
Labels: daughters, family, grief, Holy Prophet, life, sons
Newer Posts Older Posts Home
Subscribe to: Posts (Atom)