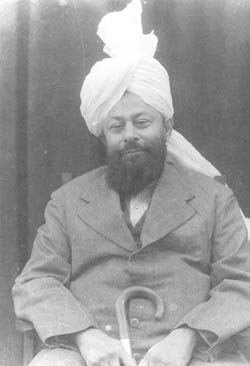 Ahmadis are mostly familiar with a famous speech made by Hadhrat Mirza Bashir-ud-Din Mahmud Ahmad (ra) in 1944. The speech pertains to the grand fulfilment of the prophecy on Musleh Maoud made by the Promised Massih (as) in his own person. What the Ahmadis generally do not know is that the same speech by Khalifatul Massih Sani contains a very important prophecy regarding the arrival of other Divinely-raised pure sons / Zaki Ghulam/ spiritually-blessed souls in future, in the Jamaat-e-Ahmadiyya to advance the cause of Islam.

The speech is very significant for Ahmadis to ponder over, especially at a time when Allah (swa) has redeemed His pledge and raised such a soul in the Jamaat, in the person of Hadhrat Munir Ahmad Azim Sahib of Mauritius. For the benefit of our readers, we reproduce below the extracts from the Speech/Declaration made by Hadhrat Khalifa Sani (ra) on February 20,1944:

“I call to witness the One and Supreme God Who has full control over my life that the dream that I have just described was seen by me exactly as I have put it, except possibly for some slight verbal involuntary inaccuracy. I call God Almighty to witness that in a state of vision I announced: 'I am the Promised Messiah, his reflection and his Khalifa.'

In the same state, under divine command, I said: 'I am the one for whose appearance the virgins had been waiting for nineteen centuries.' I therefore announce, under divine command, on oath, that God has appointed me the Promised Son of the Promised Messiah, peace be on him, according to his prophecy, who has to convey the name of the Promised Messiah to the ends of the earth. I do not say that I am the only Promised One and that no other promised one will appear till the Day of Judgment. It appears from the prophecies of the Promised Messiah that some other promised ones will also come and some of them will appear after centuries. Indeed, God has told me that at one time He will send me a second time to the world and I will come for the reform of the world at a time when association with God will have become widespread.


This means that my soul will, at some time, descend upon someone who will possess faculties and capacities like mine and he will, following in my footsteps, bring about a reform of the world. Thus, promised ones will appear in their due times according to the promise of God Almighty.

What I wish to say today is that the prophecy of the Promised Messiah, peace be on him, which was revealed to him at Hoshiarpour in the building in front of us, in which he announced in this city and concerning which he said that the Promised Son would be born within nine years, has been fulfilled in my person, and no one else can claim that he is the subject of the prophecy.

In the end he said: I draw the attention of those who have not yet joined the Movement to the fact that we are carrying the message of Islam to the ends of the earth, in the West and in the East. We earnestly wish that you should reflect on the significance of the Movement and should take advantage of the signs of God Almighty that have already been manifested. . . .

It is our duty to put forth every effort for the propagation of this message and we shall continue to discharge this duty. You should not be misled into thinking that you can stop the divine decree from being fulfilled. It is bound to be fulfilled one day and this Movement will spread all over the earth. There is no one who can obstruct the spread of this Movement.