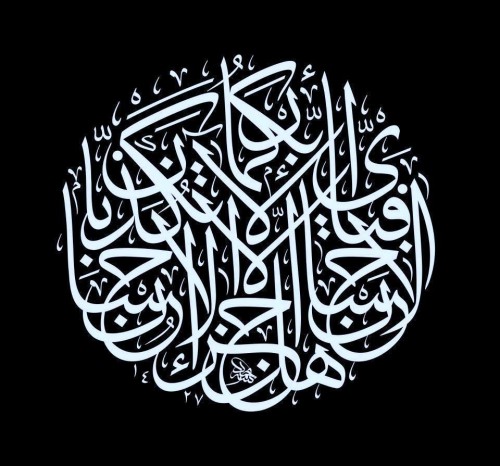 Recently, a Muslim brother from India put forward a request to Hadhrat Khalifatullah Munir A. Azim (aba) for exposition concerning the gardens as mentioned in Chapter 55 of the Holy Quran. In connection with the issue, the Khalifatullah (atba) turned in prayer to Allah, and the following explanations in English ensued. The explanations include a short commentary of Surah Ar-Rahman, the Jinns and the gardens which form the subject matter of the Surah.

For the spiritual enlightenment of one and all, we reproduced below the inspired commentary provided by the Muhyi-ud-Din (atba) on certain aspects of the subtle and profound verities of Divine wisdom encompassed in Surah Ar Rahman:

The Jinns and the Humans

Surah Ar-Rahman deals with the absolute power of Allah in spreading His mercy and benevolence to not only mankind but to the realm of the Jinns also who cohabit in the world of humans, invisible to the naked eyes – yet there is an invisible veil which separates the two and thus the two creations co-exist and both types of creatures of Allah are mortal.

The mortality of human is revealed when his soul leaves the body of clay and water whereas the Jinns get access to a body of felicity after inhabiting a body made of fire. Therefore, the Almighty has granted knowledge to both species so that they may accede to God.


Rewards of Compliance with the Divine Commandments 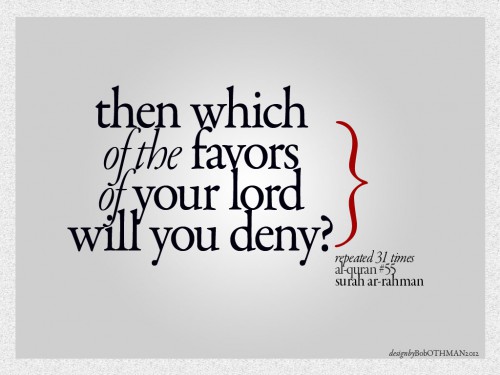 Leaving aside the evils from among both species, i.e. Humans and Jinns, what Surah Ar-Rahman also reveals is that there are immense rewards for the both if they comply with the divine commandments and obey the prophets of God when Allah send one to them.

One of the examples which the Quran mentions is the power of Prophet Suleiman over the Jinns. As a prophet, Allah gave him the ability not only to see them but also to command them. Moreover, the Holy Prophet Muhammad (saw) also encountered some Jinns but he did not know about them listening to his preaching until Allah revealed a Surah to shed light on the existence and even enthusiasm of the Jinns to submit to and obey Allah and His prophets.

Therefore, we have been informed that along with humans, the Jinns also have the power to combat the evil selves and enter the realm of “souls” at peace. The Jinns shall have another body of light upon their deaths, just like humans shall be vouchsafed a new body upon their deaths, and provided of course that they are to the expectations of Allah, always submissive to Him.

Surah Ar-Rahman therefore comes to reinforce the security of the divine promise, showing that at each step of the way, with each effort that humans shall make towards Allah, then the Almighty has reserved good for them; and the more efforts they make, the better the rewards.

Gardens and the stages of Divine Bliss

For example, Allah reveals the existence of two gardens and two more to tell both men and Jinns that there is always the scope for improvement of spirituality even in the last resting place. The greater efforts they shall make towards Him, then, Allah has the capacity to elevate them in complete peaceful places where all their worries would be non-existent.

The two gardens also signify the glory of Allah’s love for the both creatures. The garden represents the stability of the nature of the divine promise. Like trees with firm roots and with a whole garden to meet the hope of both creatures, then two gardens come as a comfort, a metaphor to make known that the fruit of Allah’s love is found in those two hearts. Therefore, those gardens are the resulting rewards of what the hearts of men and Jinns have called upon themselves.

This is because men and Jinns will (be) in separate gardens also. And they shall be moreover separated into several stages of bliss also. The higher in spirituality they will be, the more fruitful shall be their garden; that garden which will reflect the goodness of their heart. They will be masters of these gardens because when Allah, as the ultimate Master ordained them, His slaves to do something, therefore they struggled to uproot the foundation of hell which their common enemy, Iblis and the army of the satans tried to do. Whereas Iblis was for a time, but then, spirits of evil have continued to challenge both men and Jinns in their faith.

Adam and Iblis in every era

After all, Iblis was a Jinn, made of fire, yet he got to suffer the torment of hell. Therefore, the Iblises of each era shall manifest again and again to try to deviate the Adams of every era, but when the army of believers from among the humans and Jinns shall fight in the ranks of the Messenger of Allah, then their statuses escalate higher and they enter the realm of pure divine satisfaction whereby their will is divine will and vice-versa.

It is also to be noted that man (human) shall always hold a greater status in the eyes of Allah than the Jinns and that is why messengers of Allah shall always be raised from among humans and not Jinns.

When Allah tried Iblis, the head-chief from among the Jinns of his time, then when he showed his arrogance, and disgust for man and his existence as possessor of the divine spirit, therefore he fell into the agony of jealousy, arrogance and hatred.

The Jinns are also on Trial

If, Adam was responsible for the banishment of humans from the absolute divine bliss to taste hardships for a temporary time period, then bear in mind also that the Jinns also were banished alongside man, but as man is possessor of the divine spirit, the “breath” of Allah, then we must also note that no matter what, whenever Allah sees the need to try the Jinns, then He shall try them with men themselves. This is because of the initial display of the satan in Iblis, the Jinn, creature made of mere fire – whereas man become into being because of the spirit, essence of Allah into him. Thus, Allah tries Jinns with humans to see if they shall hold onto the same hatred which Iblis manifested or shall they submit to the divine will?

That is why the community of Jinns also is divided into two: the good Jinns and the evil Jinns. The good ones are those who prefer to combat the initial rebellion manifested by Iblis so that they may not repeat history, and become condemned by Allah in the harshest of torments.

That is why, whenever they hear about a messenger of Allah has come from among men themselves, therefore they submit their selves completely to Allah. Those are the Jinns who gain access to a multitude of divine favours, and they get access to a purified “soul”, the same “soul” which shall see to their entrance in Paradise, the garden of eternal life.

And the garden represents an access for them to better themselves, gaining promotion over promotion till they accede to a perfect state resembling those of angels and they partake of the divine bliss along with men also in the afterlife with the satisfaction of Allah upon them.

Strive hard in the path of Imaan: One can slip away at any time


Recall in the Quran it is said that:

And (remember) when We said to the angels: “Prostrate yourselves before Adam.” And they prostrated except Iblis, he refused and was proud and was one of the disbelievers (disobedient to Allah). (2: 35)

This shows that despite the creation of Iblis, a Jinn made of fire was different from that of the angels, made of light, but when the divine command was pronounced, then the Quran testifies that all angels submitted except Iblis. This means that at that time the status of Iblis the Jinn was so high that he was also considered as having angelic qualities. But when Allah created man, more specifically His Khalifa (Representative) and thus tried His existing creatures, the angels and the Jinns, therefore all of them submitted except Ibliss. This denotes also the presence of Jinns also among the ranks of the angels, who did not follow Iblis in rebelling against Allah.

And Allah is All-Knowing. He gives part of His knowledge to His Chosen One so that this knowledge may benefit the believers in their faith and will to strive to perfect themselves. This is also a lesson for one and all to guard his or her faith, because at any time, he can slip and let go of the treasures of faith vouchsafed to him/her from Allah.