'I know that the day will come

when my sight of this earth shall be lost,

and life will take its leave in silence,

drawing the last curtain over my eyes.

Yet stars will watch at night,

and morning rise as before,

casting up pleasures and pains.'

“We have indeed decreed that death shall be ever-present among you: but there is nothing to prevent Us from changing the nature of your existence and bringing you into being anew in a manner as yet unknown to you.”--- (HQ, 56: 61) Born on 30 September 1207 and died on 17 December 1273, Hazrat Maulana Jalaluddin Rumi (ra) is among the greatest saints of medieval Islam. One of the finest minds of the last millennium, Rumi’s works have truly travelled far: from the Persian-Islamic world, finding its admirers among human communes around the world,the writings are widely-read  today. Rumi means many things to many different people, and attempts are also being made to ‘secularize’ Rumi by declaring him a ‘new age poet’ in the West today; yet the fact remains that Rumi famously counselled everyone to ‘sacrifice your intellect at the feet of the Prophet.’

His greatest work, the ‘Masnavi’ is, in many ways, a commentary to the Qur’an in the Persian language; explicitly  acknowledging at the very beginning that the Book is an exploration into the heart of Faith- in terms of unveiling the mysteries of attainment to the Truth and of certainty. Almost eight centuries after his lifetime, Rumi continues to speak to every generation through his spiritually-infused writings and poems, reminding us about the human condition through the parables and images of everyday life. Indeed Rumi’s words are quintessentially rooted in Zikrullah, in order for us to remember God and to reform our individual and social morals, and to benefit from the Divine promises for the truly devout in the life to come.

is being taken out

you must never think

I am missing this world

into a monster's abyss

my corpse is being carried

don't cry for my leaving Alhamdulillah, Summa Alhamdulillah - By the Grace of Allah, it is the twelfth week today since I have been speaking to you about “duahs” (invocations or supplications to Allah, The Unique God) in my Friday sermons. Today I present to you some “duahs” that are found in the Holy Quran. All the movements in prayers [be it in Salat & duahs] express the deepest humility before God. The tongue and heart, body and soul come together to sing the praises of God and to praise His Glory and Greatness, and to express verbally and concretely the most complete state of weakness and humility of man. In the Holy Quran Allah (swt) has shown us many duahs through His Messengers. Now I present to you these few Quranic duahs.

To seek the good of this world and the hereafter:

Rabbana hablana min azwaajina wa zurriy-yatina, qurrata ayuniww-wa-jalna lil-muttaqeena Imaama. Our Lord! Grant unto us wives and offspring who will be the comfort of our eyes, and give us (the grace) to lead the righteous.

Rabbi innii limaa anzalta ilayya min khayrin faqiir. My Lord, I am in great need of whatever good You bestow on me. 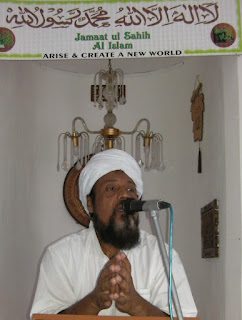 Alhamdulillah, Summa Alhamdulillah I continue on the series of sermons on “duahs” (invocations). Today, we shall hear the invocations which the Promised Messiah Hazrat Mirza Ghulam Ahmad (as) used to pray. He gave importance to Salat (prayer) and how to beautify our Salat with duahs (invocations) and praises of Allah and His Prophet Hazrat Muhammad (pbuh).

The Promised Messiah (as) says: Salat is very important and it is the apex of the spiritual exaltation of the true believer. Salat is the best medium of interacting with God in prayer.

Salat is nothing but presenting oneself before God Almighty, and it is a combination of praising God and an attempt at the expiration of one’s sins. One who does not keep these purposes in view, derives no benefit from Salat. Therefore, you must perform Salat in the best possible manner. When you are in the standing posture, your whole appearance must reflect the fact that you are standing before God in all humility. When you bow before Him in Salat, it must be a reflection of the bowing of your heart. When you fall prostrate, your manner must be that of a man who is inspired by fear of God. And pray a lot for your spiritual as well as material uplift. (Al-Hakam, 31 May 1903).

As the religion established by the Creator Himself, Islam’s teachings display an inherent awareness about human nature. It shows an intuitive understanding about the sublime heights to which a humble soul can soar high- or rather, be lifted up by the Heavenly Grace. It also indicates the darker depths to which the arrogant self would be brought down by the raging fires of Hell within when it moves away from its truer moorings. 'Did We not give him two eyes, a tongue, two lips, and point out to him the two clear ways (of good and evil)?' (HQ, 90: 9-11). 'Truly We guided him upon the way, be he grateful or ungrateful' (76: 4).
According to the Book of God, what lays ahead for the human soul as well as for the wider fortunes of a nation is entirely based on the choices they prefer; the informed decisions they make concerning their own material and spiritual futures. Indeed, the God-gifted free will allows the humans to choose their life journeys: both the highways of righteousness and moderation, and of evil and injustice are open for selection by individuals and their communities and nations. The Holy Prophet (sa) clearly advised, 'O people! There are only two highways: the highway of good and the highway of evil. Make not the highway of evil more beloved to you than the highway of good'. Whether to become a people of moral responsibility and ethical restraint, who prefer racial and religious amity, tolerance of other ways of life, compassion for the less privileged, and show residual goodwill for all fellow beings- including animals and nature; or to become a society of maniacs who thrive on conquest, disorder and triumphalism- each could pursue what one prefers in this world for as long as Allah (swt) wills it so. After all, the final outcome or the eventual judgement of all matters are in the Hands of Allah (swt).
In the perplexing surroundings of life on earth, the human soul craves for pure guidance: it is to aid and help in this latent human quest for illumination that Allah (swt) sends His messages through His chosen representatives in every era- a sublime act of mercy for His earthly creatures. Indeed, the advent of the Holy Prophet (sa) and the exemplary model of patience and steadfastness and Divine consciousness he left behind as his life in this world is a perennial source of inspiration for all those who are at crossroads of life, but remain in awe of God at all times: 'The Messenger of God is an excellent model for those of you who put your hope in God and the Last Day and remember Him often' (HQ, 33:22).
Indeed, the Book of God left behind by the Prophet (sa) provides all encompassing guidance to the human soul, illuminating the correct and straight path to tread in the contingent circumstances of our earthly life. According to the Promised Messiah Hazrat Mirza Ghulam Ahmad (as), there are over 700 verses of clear rulings in the Holy Qur’an and it is only by being aware of, and following them in full measure, that we become believers. Hazrat Mirza (as) wrote:

‘...beware and do not take a single step contrary to the teaching of God and the guidance of the Quran. I tell you truly that anyone who disregards even a small injunction of the seven hundred commandments of the Quran, shuts upon himself the door of salvation’.(Noah’s Ark, p. 42, UK edition, 2018).