Amine Jowaheer: Fall of a Pharoah

“The truth has come and the falsehood has vanished; surely, falsehood vanishes quickly”.
-(HQ, 17:82)
Amine Jowaheer is Knocked Out! 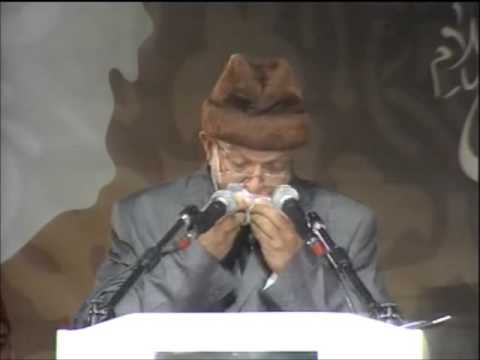 Mr. Amine Jowaheer, National Amir of the Ahmadiyya Association, is thrown out from his position by Khalifatul Massih V with effect from April 21, 2011. In articles published here on April 20-21, 2011 on the corruption inside the Ahmadiyya Jamaat, we have specifically noted that the Amir was presiding over a corrupt regime.  Beyond his corrupt ways, the Amir was also guilty of many crimes against Islam- it was because of his machinations that Allah’s Messenger of the Era was outsted/expelled from the Nizam-e- Jamaat-e-Ahmadiyya.

For the seekers of truth, it should be of great interest that Khalifatullah Hadhrat Munir Ahmad Azim Sahib (atba) of Mauritius had issued multiple warnings and revelations concerning this fellow long before his current humiliation and official dismissal from his Amir responsibilities! The dismissal and humiliation has visited him in spite of the enormous length to which his coterie was willing to stoop to protect him.

Three weeks before the actual dismissal, in his Friday Sermon on 01 April 2011, Hadhrat Khalifathullah (atba) noted all these murky dealings and firmly stated that the hand of Allah will knock him out soon. Read the extracts from the Sermon:

"Next, I have learnt that the so-called defenders of Islam (from the big families) in the Ahmadiyya Association have got together to cover the "dirt" of their so-called Amir of - the fraud he committed in the Jamaat, by reimbursing the money he stole. These people very well known how dirty their so-called Amir is, and thus each of them is hiding the sin of their allies and they use this "philosophy": "If you denounce me, I shall denounce you!" Each of them are taking themselves as pure people when in fact, they are foremost in being competitive to have the upper hand in evil works.

Whatever they may do, like I said in my previous Friday Sermons, whenever there is "dirt" (sh.), there is bound to be big flies which surround it, and now we come to see that these flies are doing their work to surround the "dirt" and take pleasure in what they do! This so-called Amir thinks that he is eternal as Amir and that he is equally eternal on earth. Each of them is trying to cover for him so as not to let truth be victorious, and they are working hard so that their evil plots have the upper hand,

But let me tell them that, come what may, this so-called Amir and his "big flies" protectors CAN NEVER HINDER THE HAND OF ALLAH FROM SEIZING THEM SOON - VERY SOON. Thereupon they shall come to know that: One must never go against Allah and His prophet, FOR IN THE NEAR FUTURE THEY ARE BOUND TO BE KNOCKED OUT! And when they shall fall, this shall hurt a lot, when they shall not be able to rearrange themselves - there shall be no reparation!"