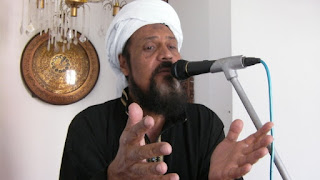 Alhamdulillah, Summa Alhamdulillah, [yesterday] September 10 marked 10 years of my official proclamation as the Promised Messiah of this era and the Mujaddid of the 15th century of the Hegira (September 10, 2010- 2020). Certainly, when an honour comes from Allah, He proclaims it in the heavens and on the earth in an exhilarating way, and the faithful and the seekers of truth are those who come forward because Allah opens their hearts to recognize and accept this truth.

All glory belongs to Allah Who has raised me as His Chosen Servant and Messenger in this century and bestowed upon me the honour/ title/ mantle of Messiah and Reformer for the benefit of mankind.

It is my humble prayer that Allah may guide the people who have the fear of Allah in their hearts and direct them to His Divine Manifestation of this century and to the Jamaat Ul Sahih Al Islam so that Islam and humanity as a whole be welded once again under the banner of Tawheed (the oneness of God). Ameen.

Today the world is in the grip of multiple degradations, both on the material and spiritual front. We can say that the world is very sick, the people are in extreme pain. Our little Mauritius is also not spared from the dangers that lie in wait [and which have already gripped it], especially with the doubtful and worrying events which have occurred in recent months with the entry of the Japanese bulk carrier “Wakashio” into our territory at Pointe d’Esny and the drama that followed with the leak of tons of diesel and fuel oil making the coast of Mauritius unrecognizable and killing sea creatures.

After this event, many events took place, but Insha-Allah, if Allah give me the Tawfiq, I will speak to you a little more about this in another speech.

What I want you to understand is that humanity is in danger [like I have since the beginning told you and keep repeating to you], the conscience of man is in danger because this conscience is threatened by malicious troubles which make him choose the world over the spiritual [Allah]. He prefers to race for money and vain pleasures instead of seeking true spiritual pleasure, the pleasure of Allah which is eternal.

Therefore, prayer is essential in our daily life. Without prayer to the One God [Allah] and without His remembrance (Zikr), we will achieve nothing. Remembering Allah is to guarantee a strong bond with Him, to guarantee His pleasure for us and His help in all circumstances of our life.

Duahs of the Holy Prophet (sa)

So, I continue today by the grace of Allah the 10th part of my sermon on duahs, in this case the invocations of our beloved prophet Hadhrat Muhammad (pbuh).

When we are worried or sad

O Allah, I seek refuge with You from worry, grief, incapacity, laziness, miserliness, cowardice, the weight of debts and being overpowered by (other) men. [Ahmad, Hakim].

In case of affliction

O Allah, I hope for Your mercy. Do not leave me to myself even for the blinking of an eye (i.e. a moment). Correct all of my affairs for me. There is none worthy of worship but You. [Abu Dawud, Ahmad]

When meeting the enemy

Allah (Alone) is Sufficient for us, and He is the Best Disposer of affairs (for us). [Bukhari]

O Allah, Lord of the seven heavens, Lord of the Magnificent Throne, be for me a support against [such and such a person] and his helpers from among your creatures, lest any of them abuse me or do me wrong. Mighty is Your patronage and glorious are Your praises. There is none worthy of worship but You. [Bukhari]

Supplication against the enemy

O Allah, Revealer of the Book, Swift to account, defeat the groups (of disbelievers). O Allah , defeat them and shake them. [Muslim]

When you fear a group of people

O Lord! Protect me from their evil as You see fit. [Muslim]

When you encounter a difficulty

O Allah, there is no ease other than what You make easy. If You please You ease sorrow. [Ibn Hibban]

Congratulations to the parents of a newborn baby

May Allah bless you with His gift to you, and may you (the new parent) give thanks, may the child reach the maturity of years , and may you be granted its righteousness.

The reply of the person being congratulated is to say :

May Allah bless you, and shower His blessings upon you, and may Allah reward you well, and bestow upon you its like and reward you abundantly. [An-Nawawi]

To protect your child

Hadhrat Muhammad (pbuh) used to place Al-Hasan and Al-Husayn under the protection of God with these words:

I seek refuge for you in the Perfect Words of Allah, from every devil and every poisonous pest, and from every harmful eye. [Bukhari]

What to say to the sick person when we visit him

Let there be no harm in that. It will be, God willing, a purification for you. [Bukhari]

I beseech Allah the Great, the Lord of the Great Throne, to heal you. [Tirmidhi, Abu Dawud]

O Allah, forgive me, bestow Your Mercy on me and let me join with the exalted companions. [Bukhari, Muslim]

Supplication while the sick is about to die [Sakraat]

Hadhrat Muhammad (pbuh) during his illness which was at the origin of his death, began to immerse his hands in water, to pass them over his face and to say:

There is no god worthy of worship except Allah. Verily, death has its pangs. [Bukhari]

The one whose last word will be: Laa Ilaaha Illallah - “No deity is worthy to be worshiped except Allah,” will enter Heaven. [Abu Dawud]

When you find yourself touched by an ordeal

We belong to Allah and to Him we are returning. O Allah, reward me for my calamity and replace it for me that which is better. [Muslim]

When closing the dead person’s eyes

O Allah, forgive [name of the person] and elevate his station among those who are guided. Send him along the path of those who came before, and forgive us and him, O Lord of the worlds. Enlarge for him his grave and shed light upon him in it. [Muslim]

The presentation of condolences

Surely, Allah takes what is His, and what He gives is His, and to all things He has appointed a time… so have patience and be rewarded.

It is also good to say:

May Allah magnify your reward, and make perfect your bereavement, and forgive your departed. [Bukhari, Muslim]

When placing the deceased in his grave

In the name of Allah, and according to the Sunnah of the Messenger of God (pbuh). [Abu Dawud]

In case of wind

O Allah! I implore You to grant me the good of this wind and I seek refuge with You against the evil it conveys. [Abu Dawud, Ibn Majah]

Our beloved Prophet Hadhrat Muhammad (pbuh) made so many duahs - supplications in every circumstance of his life, and the life of believers. Although I have given several sermons on the subject, but nevertheless there are still other duahs. I can only put forward a few of them so that they can be of benefit to each one of us, Insha-Allah.

Therefore, address your supplications to Allah during your very Salat. Transform your Salat into intense supplications and prayers. Insha-Allah.

May Allah accept our pious supplications and have mercy on us in all circumstances. Ameen.