By His grace, Allah (swt) has given me again the opportunity, and blessed grace, to continue on the subject of my sermon on the duahs revealed at the beginning of the Divine Manifestation. It will not be possible for me to present each of them, mentioning the day, date, time of the revelation in question, as well as the circumstances in which they were revealed to me because the sermon will become too long and it will take months and months since I’m giving a series of sermons on the subject. So I will only share with you a few of these invocations. 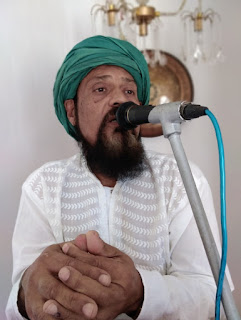 Allah has certainly revealed [all these invocations] to me and I will not be able to present them all [at once] for Allah, by His grace and mercy continues to reveal to me - His Khalifatullah - these duahs, as well as other revelations. He is not a God Who gives revelations for a limited time and then stops speaking (giving revelations). When He raises His chosen servant, each time He sends down messages to His Messenger and also to show that He is always there, present and that He will not forsake the Messenger He raised. He gives him messages, duahs, shows him His signs. He is more caring [and affectionate] than a parent who has just received a newborn into his home. Allah does everything for us. He is more devoted than a [human] parent to his child, especially when He sends His Messenger and [this affection and security that Allah gives him makes] enable this Messenger also not to have any fear of creatures, and he does not care of what they say and plot. These people laugh at him, call him a liar, a fool, a madman and say that he takes (Psychotropic) drugs, antidepressants - they blame the Messenger of Allah in different ways and in great quantity, but Allah is present everywhere with His angels who write what these fools say and do; each of their deeds is noted and therefore the time will come when Allah will take them in hand, whether on earth but also in the Hereafter and certainly the punishment of the Hereafter will be more painful.

A Messenger of Allah also has no need to fear what these evildoers are doing against him, for his provisions, honour, dignity, and even his mission are not in the hands of these fools. On the contrary, the more they slander the Messenger of Allah and persecute him, the more Allah will raise his rank, like a ball which, when struck, bounces and rises in the air. It is these kinds of trials, persecutions and boycotts that prove the veracity of a Messenger of Allah. So if the Creator of the Universe has sent His Messenger, why do we have to worry about what these evildoers are doing, when we know full well that their stay here on earth is temporary, and they will have to show up in the court of Allah? Each of them will be accountable for what they have done (on earth).

So as the Khalifatullah, and Messenger of Allah - for me - these trials, boycotts, persecutions, and plots are like twigs [afflictions which cannot reach the Messenger of Allah]. When I feel the presence of my Lord, there is such a perfume from heaven manifesting [speaking of this, it is not only I who smell this divine perfume, but since the beginning of the Divine Manifestation, many of my disciples, and even up to this day, whether it is the men, ladies and children, they have also witnessed to the manifestations of extraordinary perfumes which come from Allah. Recently in India too, in Tamil Nadu, my disciples have witnessed this fragrance and they have received good news as a reward for their dedication and sincerity to Allah and His Messenger in this present century. Alhamdulillah, Summa Alhamdulillah].

And then when these perfumes of the heavens are manifested, Allah separates me from these filth; the plans and plots of my enemies are like toilets that give off bad smells and where you have to close your nose and mouth. So if there is to be told, there is a lot to be told. And at that point, they will see that what I am saying is hard to take. So, let’s leave mess, and rather enter the Spiritual Bath which will perfume our body and especially our soul, Insha-Allah.

Speaking of this, I share with you a very important dream that my dear disciple Abdur Rahman from Coimbatore [India] saw a few days ago:

He was doing tabligh (preaching) with an Ahmadi, and he told him that the 15th century Reformer had come. So this person was surprised and said to him, “Really? A person will come like that, [all of a sudden]?” Then he saw that the Promised Messiah Hazrat Mirza Ghulam Ahmad (as) came back and made an announcement to the people: “Come and take the oath of allegiance with me again” but most of these people [Ahmadi Muslims] turned their backs on him; only a few took the Bai’ah [oath of allegiance] again.

So, we must also understand that Allah does not give everyone the opportunity to purify themselves with these perfumes, riches, and treasures which come from heaven. Only the Muttaqeen (the pious) who will benefit from all this; those who fear and obey their Creator [Allah] and recognize His Messenger without any form of arrogance, and boasting, and they accept [the truth] and become sincere, honest followers of that Messenger. And this dream clearly shows that the Messiah has returned and that I am his second coming, but it is only a few of the people, especially the Ahmadis, those who say they believe in the Promised Messiah (as), who will accept. Most of them, despite saying they believe [in the Promised Messiah], but when Allah tests them and sends them His Messenger, His Messiah, someone who is chosen from among themselves, they refuse and turn their backs on him. So, it is very unfortunate for them, because they have not really turned their backs on me, but it is on Allah that they have turned their backs because it is Allah who sent me, and they will have to account to Allah when they return to Him.

So, I now present to you these duahs that Allah has revealed to me:

O my Lord, show the difference between truth and falsehood; You are the Knower of those people who are truthful and good.

O my Lord! Let me have the upper hand on the hellfire. O my Lord! Remove me from the fire. Allah is the best of Protectors and the Most Merciful of those who show mercy.

O my Lord, let me die as a Muslim and put me among the good [people who do good].

O Allah I am defeated; so come to my rescue and crush them (mention the name of the opponents) to pieces.

O my Lord [Allah]! Show me how You revive the dead.

Glory to You, by Your praise, I ask for Your forgiveness and I turn to You.

O my Lord [Allah]! Enable me to enter through the gate of truth. [Give me a place among the truthful].

O my Lord, do not leave any disbeliever on earth.

Our Lord! We have believed; count us among the witnesses.

Our Lord, forgive and send help from above.

Our Lord! We have come in the state of martyrs; differentiate between us and the harming people.

Our Lord! Forgive us our sins. Certainly we were wrong. Our Lord, do not let us be overcome in the hand of the ignorant. Turn people’s hearts to us.

O my Lord, grant me good children as a favour from You. You are indeed the Hearer of prayers.

O my Lord! Show a sign from heaven. Show me this great promised event.

O my Lord, grant me wisdom and make me join the good [those who are good in Your sight]; And make people think good about me after me [after I die].

Glory to You, O Allah, and all praise is for You. O Allah, forgive me.

Praise be to Allah, and peace be upon His chosen servants. Ameen. Summa Ameen, Ya Rabbul Aalameen.

Insha-Allah, I will continue my sermon on the same subject next Friday.