When the Qur'an spoke English 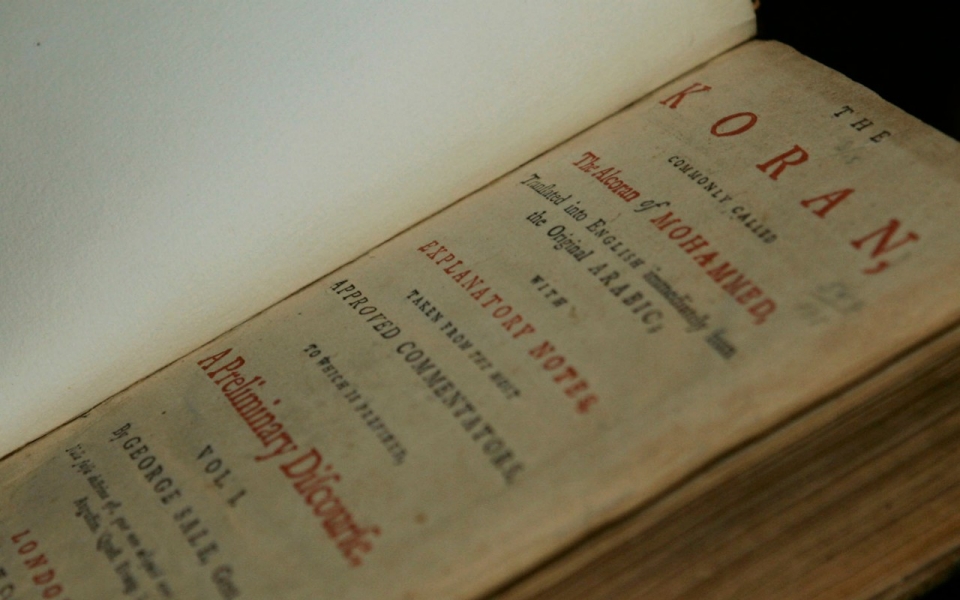 The first Muslim member of Congress assumed office in January 2007. For his swearing-in ceremony, Rep. Keith Ellison, D-Minn., chose to pledge on the Quran. The copy he used, specially loaned by the Library of Congress for the occasion, had once belonged to Thomas Jefferson. [Inset: The Qur'an once owned by Thomas Jefferson. Photo by  Haraz N. Ghanbari /AP]

Why did Jefferson own a copy of the Quran? The third president was interested in Islam for many reasons, as Denise A. Spellberg explains in her book “Thomas Jefferson’s Qur’an.” He was able to read the holy book of Islam in the first place, however, only thanks to a recent translation, the first direct one from Arabic into English, a copy of which he purchased as a law student in 1765. That translation, by a young English lawyer named George Sale, would prove to have an outsize role in the Western study and understanding of the Quran.

Long before Europeans governed Muslim colonies, interest in Islam and its cultures ran high in Europe. Part of the reason was political. Three Muslim empires dominated large parts of Asia: the Ottomans in Anatolia, the Mediterranean and Arabia; the Safavids in Persia; and the Mughals in India.

These Muslim dynasties were not just powerful but were also admired for their refined arts and culture — music, poetry, gardens, ceramics and textiles. Moreover, books in Arabic offered knowledge of many fields to those who learned the language. Not just the sciences and philosophy but even Arabic literature enticed European translators. Thus, in 1704 a Frenchman first translated the “1001 Nights,” whose tales soon became an enduring classic of European as well as of Arabic letters.

Above all else, the religion of Islam itself seemed an especially compelling field of inquiry to a variety of European scholars and thinkers. How had a handful of Muslims emerged from the Arabian Peninsula in the seventh century to conquer so much of the known world? This was one of the great questions of world history, as both the French Enlightenment philosopher Voltaire and the English historian Edward Gibbon agreed. In addition, philosophers and freethinking Christians deemed the central tenet of Islam, the unity of God, more rational than the mystery of the Christian Trinity. Thus, many different Europeans attributed singular importance to Islam and the language of its revelation, Arabic.

Making of a translation

In November 1733 the first translation of the Quran from Arabic into English — a copy of which Jefferson would eventually purchase — appeared in London. Its author, Sale, had learned Arabic in his spare time and had never visited a Muslim country. He once wrote, “I am but too sensible of the Disadvantages, one who is neither a Native, nor ever was in the Country must lie under, in playing the Critic in so difficult a Language as the Arabick.” To translate the holy book, Sale mainly used volumes in his own library, including a recent Latin translation that had been published in Counterreformation Rome. This Latin Quran, designed for the use of Catholic missionaries, contained a wealth of previously untranslated information.

Sale also borrowed a manuscript copy of the Quran from the Dutch Church in London. The book had been copied in the late 16th century in Istanbul, the capital of the Ottoman Empire, and in 1633 a Dutch trader donated it to the London church. It sat in the library for almost a century until Sale made use of it. We do not know why this particular copy was gathered and brought to London, but Qurans were prestigious objects in European eyes. The holy book of Islam was probably the most frequently collected Arabic book, often acquired by collectors who could not read it.

Even today, Western scholars consult his 'Koran.' The historian Michael Cook has called it 'an old translation which has worn very well.'

Although Sale did not say so, he relied directly on this particular copy to pen his translation, as I discovered upon examining the manuscript in London in 2012, during my research on European knowledge of Islam in the age of the Enlightenment. This Istanbul Quran presents some rare variants of certain words, which also appear in Sale’s translation, thus proving the connection. The text is accompanied by a commentary that was among the most popular in the Ottoman Empire. By employing it, Sale came to offer, in his translation and notes, an interpretation that largely reflected the mainstream Ottoman understanding of the Quran.

Only one earlier English version had appeared, in 1649, but it was based on a loose French translation and, as Sale put it, “added a number of fresh mistakes” to its French original. By contrast, what Sale achieved was a remarkably fluent, elegant and precise text. He admired the beauty of the Quran but, with becoming modesty, claimed “it must not be supposed the translation comes up to the dignity of the original.” Even so, his prose continues to resonate today, as is evident in the first lines of his version of the famous “throne verse”: “GOD! there is no GOD but he; the living, the self-subsisting: neither slumber nor sleep seizeth him; to him belongeth whatsoever is in heaven, and on earth.”

Sale’s translation was not just a literary achievement of a high caliber but also a contribution to knowledge. He included a lengthy preface in which he explained many historical, theological and ritual aspects of Islam. Prior to his “Koran,” the best information about Islam available to Englishmen was in Latin. Sale’s efforts undercut the prejudicial notions that had circulated since medieval times. For instance, he narrated the life of the Prophet Muhammad without mention of the legendary and polemical stories so often told in Europe since the Middle Ages. Sale worked in the wake of a renewed European effort to learn Arabic and study Islamic traditions, and he benefited from the work of his predecessors. Yet he also brought to the subject a perceptive critical faculty. This combination of accurate knowledge and a willingness to understand a foreign religion makes Sale’s “Koran” a remarkable achievement, and one of enduring import.

Indeed, the translation remained the standard English version into the mid-20th century. Thus, it mediated knowledge of the Quran and Islam not just for Sale’s contemporaries but for many generations of Britons and Americans. Even today, Western scholars consult his “Koran,” particularly for its ample notes; the historian Michael Cook has called it “an old translation which has worn very well.”

In our age, many translations of the Quran are available. If the 18th century saw only one into English, and the 19th two, in the 20th century there were at least 16, half of which were published in the final quarter of the century. Yet the average Westerner knows little about Islam, despite ever-increasing encounters between Muslims and non-Muslims, whether through immigration, trade or tourism. Knowledge and sympathy for the many peoples of the world, including its many varieties of Muslims, have not kept pace with air travel, satellite TV and Ethernet connections.

Perhaps the story of George Sale and his Quran translation — composed against the odds, without the aid of the Internet — should serve as an inspiration. Western peoples have for centuries studied Islam and its cultures. By translating its most important texts, they have sought to reap the fruits of the many literary and intellectual traditions that this religion has inspired.

Alexander Bevilacqua will complete his Ph.D. in history at Princeton University this spring. His research investigates cultural and intellectual exchanges between Christians and Muslims before the colonial era.

The views expressed in this article are the author's own and do not necessarily reflect Al Jazeera America's editorial policy.