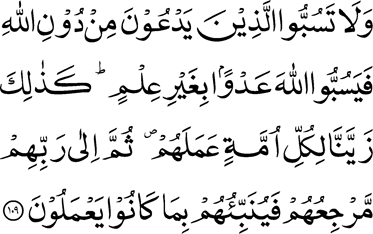 “And do not insult those they invoke other than Allah, lest they insult Allah in enmity without knowledge. Thus We have made pleasing to every community their deeds. Then to their Lord is their return and He will inform them about what they used to do.” (6: 109)

Respect for other faiths is an essential part of Islam as it should be for all faiths also. Respect for each other’s religion plays a vital role in maintaining peace at familial, social, environmental, national and international levels. 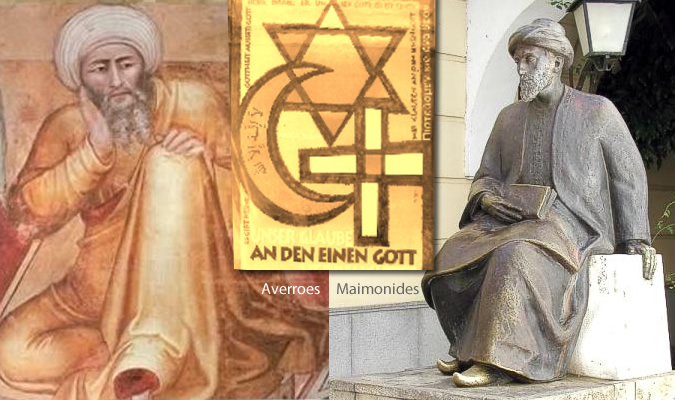 To each Muslim, liberty of religious belief and practice must be dear since tolerance is a vital part of Islamic faith. Religious liberty practiced in any society guarantees also liberty of scientific discussion within it and a tolerance of the views of others, so essential to the growth of science. 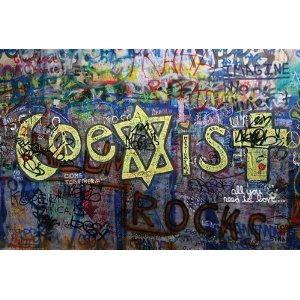 The Quran clearly states that the ultimate choice of belief is the concern of an individual: “Proclaim Oh prophet, this is the truth from your Rab, then let him who will believe and; let him who will disbelieve.” (18: 30)

The next verse makes the principles of freedom of individual belief or disbelief even clearer and more precise.

This concept of tolerance towards other beliefs is carried further with the Quran defining clearly the role and limits of the ministry of the Holy Prophet of Islam Hazrat Muhammad (pbuh) in the following words: “Warn mankind for you are but a Warner. You have no authority to compel anyone (to believe).” (88: 22-23)

And yet again: “We have neither appointed you as a keeper over them, nor are you their guardian”. (6: 108)

This verse is immediately followed by the next which I have read at the beginning of my sermon which clearly states another basic principle: “And do not insult those they invoke other than Allah, lest they insult Allah in enmity without knowledge. Thus We have made pleasing to every community their deeds. Then to their Lord is their return and He will inform them about what they used to do.” (6: 109)

When the world has since long been focused at imitating Islam and the Muslims and reproducing to a certain extent the commandments of the Quran in their daily lives so that they may benefit from the last law-bearing book, but without giving it the open and agreeable credit for the positive changes in the world, then we know for sure that despite not acknowledging the religion of Islam as the ultimate religion to revolutionize mankind and his thoughts, the people of other faiths do recognize the truthfulness of Islam, but agree to its teachings in secret.

If they were to declare openly that the Quran holds such truths which had, has and will continue to revolutionize man, his behaviour, culture and thoughts, then it shall equally mean the death of their own power-thirst or egoistical attachment to the erroneous thoughts and belief of their forefathers, who had hidden the true teachings of God and His prophets so as to fabricate such falsehoods or half-truths which have confused them on the matter of religion.

This reminds me that recently Bible researchers and scholars have further discovered that the Bible clearly shows that it was written over a thousand years after the events mentioned in this book/s, and those who had written these biblical stories have made huge mistakes in relating/writing down some stories that had nothing to do with the Abrahamic era.

Despite the serious interpolations which their forefathers made to religion and religious books, but nevertheless the fruits of their loins are not responsible for what their old fathers did. In fact, their forefathers were sent divine warners to warn them, not the present generation, until now.

Nevertheless, God Almighty has taught the Muslim to hold all faiths in a respectful manner, and has taught that there cannot be compulsion in religion (2: 257). What is needed is gentleness, and lots of patience, efforts and prayers to Allah so that the Rab of all the worlds can change the hearts of the people.

Allah clearly says, do not insult their false gods despite that you know that they are in the wrong, for in return they can spitefully badmouth the real and true God in ignorance and thus it is you, Muslim who shall be responsible for this sin. But if the believers in general are meant to stay quiet to some degree, but a prophet of Allah, whenever he gets precise instruction to go against these kinds of people and their false gods, then he must do so in obedience to the commandments of Allah. Therefore there is a big difference between the common people from among Muslims and the prophet of Allah who is Muslim also. Indeed the latter is the first of believers, because he has to believe in his very own revelations which he is receiving from Allah and thus he becomes the first of believers “Awwalul-Muslimeen”.

Then, the Holy Book, in the clearest possible terms, makes religious liberty a fundamental part of a Muslim’s faith. It states that the role of the prophet is to convey Allah’s message; he has no authority to compel anyone nor has he a responsibility regarding the acceptance of the faith he preaches. And at the very least an attitude of respect is due to leaders of all faiths, but he the duty to comply with the divine instructions and deliver the message as per the divine instructions.

Sometimes he is hard, sometimes soft depending on the situation he is facing and the beings he is dealing with, and most important, according to the divine will and command. Even in the times of the Holy Prophet Hazrat Muhammad (pbuh) where he had to be hard to some people, be them friends, disciples or enemies and soft to some others among the mentioned groups of people. This is mainly because of the situation and the instructions he receive, because who knows better the hearts of others if it is not God Almighty? Unless he receives a revelation informing him about the people, the prophet of Allah remains a man like others who does not know the realities and verities of his peers, but when Allah pours down upon him revelation to enlighten him as to the true nature of some people, then the prophet gets to a stage which the common man cannot always understand and agree. That is why they prefer most of the time to label the prophet as a madman, a sorcerer or a magician, because they are not prepared to admit that the verities which he mentioned and which are right on target are of divine source.

That is why, there are three main categories of unbelievers:
(1) Those who are initially unbelievers and who go on to become sincere followers of the prophets of God;
(2) Those who are unbelievers, pretend to believe and integrate the circle of believers to spy on the prophet and the believers;
(3) Those unbelievers who are stone-hearted people whose hearts and souls refuse to let in the divine light.

As for the hypocrites, they can accede to truth when they are in constant presence of the Messenger of Allah and they can receive the light and be rid of unfaith (although it is not always the case).

Whereas, the third type of unbelievers are those whom Chapter 109 refers to, those who are not at all interested in true faith and who prefer to remain attached to their false beliefs. And to maintain a peaceful relation with them is the objective of Islam, so that all people, Muslims or otherwise can live together in peace, and it is for God Almighty to judge them all, according to their beliefs, deeds and intention. The prophets of Allah have only to deliver the message clearly so that tomorrow these people will not be able to say that they were not aware of the truth.

Peace on those who follow the true guidance. May Allah enable you all in the Jamaat Ul Sahih Al Islam and the Muslims around the world to reflect the true spirit of Islam and the tolerance it preaches for the wellbeing of one and all, and essentially to prove through our own actions that the teachings of Allah are not lost on us, that we are capable of holding firm the torch of Islam successfully. Insha-Allah. Ameen.