Jamaat-e-Ahmadiyya at the Cross-roads of Time

By the grace of Allah, the Jamaat Ul Sahih Al Islam is today celebrating its Jalsa Salana in the north of Mauritius. It is an historic Jalsa Salana in the annals of the Jamaat Ul Sahih Al Islam whereby a hundred years have passed since our ancestors first accepted the Promised Messiah of the past era, Hazrat Mirza Ghulam Ahmad (as). And all this came to be as per the plan of Allah (swt) for this little island, such an island which is difficult to see on the world map. And today, Allah has raised another of His Messiah who is present amidst you today to celebrate this centennial celebration of the message of the past Messiah in our little island.

Allah (swt) has wished for His Messiah and Khalifatullah to celebrate the Jalsa Salana 2015 together with the seekers of truth of this era. And Allah (swt) gave His chosen servants that great honour to be foremost in the grand event of this year 2015, and thus the Jamaat Ul Sahih Al Islam was the first to be able to publish a centenary magazine on the subject, launched it and organised also several conferences around the island in different villages, accompanied by social works as well. 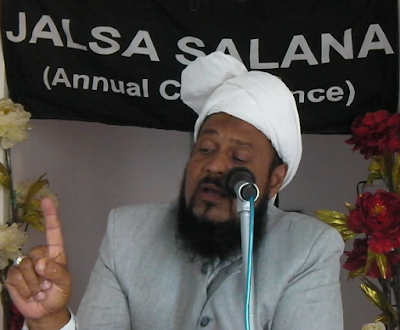 Therefore, this Jalsa Salana holds another status and importance today. It is a Jalsa which shows the results of this centennial year, for it is the Caliph of Allah (Khalifatullah) who has received this true blessing from Allah to honour those who toiled hard, made sacrifices over sacrifices in 1915 to receive the message of the Promised Messiah (as). When they accepted that message, they had to undergo all kinds of trials (for the sake of their faith). Their trials and sacrifices did not go in vain.

It has borne its fruits in this very same island, and at the beginning of this century, Allah has raised His Messiah, His Muhyi-ud-Din, His Khalifatullah. You like it or not, but the fact remains that Allah raised this humble servant and Allah has decreed: “It is My Caliph (Khalifatullah) who shall have the upper hand over all other Jamaats”. The latter have failed because of their arrogance, boastfulness and more specifically because of their refusal to accept the Khalifatullah of this era and to believe in the revelations he receives from Allah. They have moreover given their idol foremost importance (instead of Allah and His signs). Thus ensured the results which they are now receiving/ witnessing, but Allah (swt) is verily showing these to them so that they may know that it is in the simple ways and without exaggerated expenses that they can make progress. But instead what do these people do? They are wasting (valuable) money of the contributors who contributed in the path of Allah.

Allah (swt) has enabled His Khalifatullah to honour this centennial event and made him (i.e. this humble self) the key person in all aspects to receive this privilege. The Jamaat Ahmadiyya (mainstream) lost this divine honour, for despite that they are celebrating that centennial event, yet there is no spiritual flavour, no spiritual juice in it, just like a withered orange devoid of juice.
Read more »
Email ThisBlogThis!Share to TwitterShare to FacebookShare to Pinterest
Labels: Ahmadis, Ahmadiyyat, Amine Jowahir, centenary, Jamaat Ul Sahih Al Islam, Khailafat, nizam-e-Jamaat
Older Posts Home
Subscribe to: Posts (Atom)