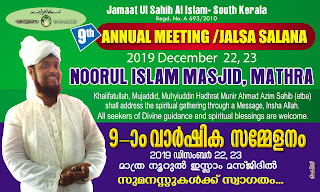 JAMAAT UL SAHIH AL ISLAM-Kerala (South) organized its Ninth Jalsa Salana at the historic Noorul Islam Masjid, Mathra, 22-23 December 2019. Alhamdulillah, in addition to the members in Mathra; brothers from Alappuzha and Karunagappally, also could reach the Mosque venue ahead of the commencement of the two-day programme. As a community of people with shared interests and concerns, common goals under the banner of Jamaat Ul Sahih Al Islam and the Imamat of the Khalifatullah Hadhrat Munir Ahmad Azim Saheb (atba) of Mauritius, the members of the Jamaat listened to speeches and engaged with one another in extended conversations, discussing the finer points of being a believer in Tawheed in these times.

The brothers and sisters who participated in it viewed the get-together as an opportunity for soul-searching and critical self-reflection on our collective faith in the Islamic Way and all that it entails in our private lives and public conduct. They recognize that these are challenging times, a time when the world around is dangerously indulgent in a destructive trajectory of life, whereas the ethical and spiritual outlook is beckoning to a radically-moderate transformation in our whole outlook on all spheres of life. All of us also agree that even when the society around is largely indifferent, and in certain cases, actively hostile to all that we stand for; it is our duty as the party of believers to stand up with spiritual courage and sublime patience, perseverance and steadfastness on our truths, against all odds and at all costs.

On the first day, all brothers and sisters collectively offered the Tahajjud prayers at 4.45 am, and it was followed later, at 5:30 am, by the Namaz-e-Fajr. Mukarram Amir Jamaluddin Raother Saheb conducted a Dars-e-Qur’an, immediately after the Fajr Namaz. After morning works and breakfast, members assembled for the first Session of the Jalsa at 10.00 am. Mukarram Sulfikar Ali saheb presided over the meeting. DA Zainul Abdeen saheb recited the Holy Qur’an. Sadiq Ali saheb recited a Nazm. Janab K. Saleem saheb took a class on certain sacred traditions (Hadith) of the Holy Prophet (sa). Mukarram Amir Saheb, in his address, explained some aspects of the special message of Hadhrat Khalifatullah (atba) on the occasion of the Kerala Jalsa.

After the Session Namaz-e-Zuhr was followed by collective Lunch and rest. At 6.30 pm, the second Session started. In the final session of the day, Janab Saleem saheb of Alappuzha presided over the meeting. Recitation of the Holy Qur’an and Translation was done by our brother Janab Sadiq Ali saheb. Mukarram Sulfikar Ali saheb took a class on certain sacred traditions (Hadith) of the Holy Prophet (sa). This was followed by the explanation of an episode from Islamic history by our brother DA Zainul Abdeen saheb. 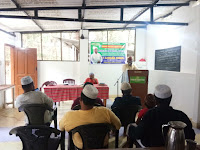 Mukarram Amir Saheb, in his address, completed the exposition that he began in the morning session on aspects of the Special Message of the Khalifatullah (atba) for the Jalsa Salana. In his speech, the Amir Saheb pointed to the verities of spiritual wisdom contained in the message, Alhamdulillah. In explaining the larger meaning of ‘Kalima Tayyeba’ in the Jalsa message, Hadhrat Khalifatullah (atba) underscored the significance of being conscious of our foundational beliefs and values in shaping our spiritual future. Becoming true and sincere believers require us to match our actions in everyday life in accordance with our declared intentions and pious announcements. When the heart truly recognizes the Majesty and All-encompassing Power of the Lord over all affairs and every desired thing, it becomes capable of looking beyond all worldly distractions. Such a heart inspires righteous action, ignoring even the claims of the self; carrying out tasks in service of our common humanity. Hence, true belief in 'Tawheed' is a great blessing: it removes inner vices and transforms our negative emotions, sorrows and worries; thereby creating a veritable state of paradise on earth for the believer, notes Hadhrat Khalifatullah (atba) in the special message.

On 23rd December, Day-2 of the Jalsa, members performed the Tahajjud prayers. Later, Namaz-e-Fajr was offered at 5.30 am. This was followed by the Dars-ul-Qur’an session with the Amir Saheb. At 10.00 a.m, Third session commenced with Recitation of the Holy Qur’an and Translation by Sulfikar Ali saheb. Based on the ongoing series of sermons by Hadhrat Khalifatullah (atba), Mukarram Amir Saheb, in his inaugural address, spoke about the all too-human vices that the Qur’an cautions the believers against: ‘Ghibbat’- speaking ill against people behind their backs, defamation, ill thinking, envy, jealousy, hatred, enmity, etc.

Janab K. Saleem saheb made a speech on the subject, “The persecution of the First Muslims”. Janab D.A. Zainul Abdeen saheb offered some insights from the writings of Hadhrat Imam Ghazzali (ra) on the importance of ‘brotherhood’.

The young members of the Jamaat present on the occasion, Munir Ahmad Azim and Zachariah Ibn Zain, were given an opportunity to recite Surah Al Fatiha, and also other short chapters of the Qur’an and Duahs that they have memorised so far, Alhamdulillah.

In his speech, Na’ib Amir Sadiq Ali saheb spoke about the ‘importance of service to humanity’.

In his concluding address of the Session, Mukarram Amir saheb dealt with the importance of avoiding all aspects of ‘Ghibbat’ -that Hadhrat Khalifatullah (atba) has been exhorting us through a series of sermons of late,- and also the significance of doing justice to our pious pronouncement of ‘Kalima’ by working hard to purge ourselves of all that is ‘Shirk’ and ‘Bid’ah’ in Deen-i-Islam. 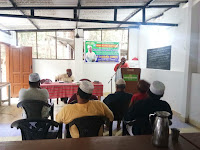 In the final Session of the Jalsa, Mukarram Abdul Latheef saheb presided over. Recitation of the Holy Qur’an and Translation was done by Janab K. Saleem saheb. Mukarram Sulfikar Ali saheb conducted a Dars-e-Hadith. Na’ib Ameer Sadiq Ali saheb did a review of the Jalsa deliberations- pointing to the ten years of progress we have had as a Jamaat in India, as followers of the Divine Manifestation of our times- first witnessed in Mauritius in the august personage of Hadhrat Khalifatullah (atba) in the last decade. 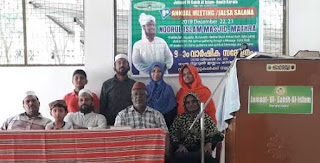 In the final session, children were awarded prizes for their good performance on Deen-i-Ta’lim. Mukarram Amir Saheb offered closing Speech by succinctly explaining the special message of Hadhrat Khalifatullah (atba) for the benefit especially of those who missed out the proceedings on the first day. In the final speech, the Amir Saheb also stressed the need for upholding ‘faith and its requirements’ over all worldly-matters and interests.
At 7. 30 pm, after collective prayers of Maghrib-Ish’a, and dinner; the members departed from the venue to their respective places with renewed spiritual fervour and verve, Alhamdulillah, Summa Alhamdulillah.
R. Jamaludin Raother
Amir
Jamaat Ul Sahih Al Islam - South Kerala
Mathra, December 23, 2019.
Email ThisBlogThis!Share to TwitterShare to FacebookShare to Pinterest
Labels: Jalsa Salana, Jamaat Ul Sahih Al Islam, Jamaluddin Sahib, Kerala Jamaat, Khalifatullah, mathra, Noor'ul Islam Mosque
Newer Post Older Post Home