Siraj Makin, the women’s collective of the Jamaat Ul Sahih Al Islam, organized a One-Day Ta’lim Majlis (Divinity Study Programme) at the historic Noor'ul Islam Masjid Mathra, South Kerala, India on Wednesday, 11 September 2019~ 10 Muharram 1441 AH. The Ta’lim Majlis essentially sought to build upon the earlier initiatives of the Kerala Siraj Makin- the programmes of 09 February 2019, 19-20 April 2019 & 23 June 2019- for the benefit of its members so as to keep them aware of the Deeni Ta’lim, and to provide them an opportunity for collective learning. 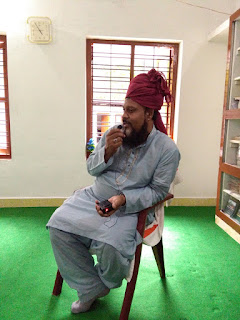 Addressing the women believers on the occasion, Imam-Jamaat Ul Sahih Al Islam Hadhrat Muhyi-ud-Din Al Khalifatullah Munir Ahmad Azim Saheb (atba) of Mauritius underscored the significance of personal sacrifices and religious services for nourishing the spiritual landscape around us. The exemplary personal modesty, dignity and morality, as well as the trail-blazing footprints of early believers is certainly an important source to mine by sincere seekers in their individual and collective quest for God's approval in all that they engage in. Illustrating this point, Hadhrat Khalifatullah (atba) calls attention to episodes from the glorious chapter of Islamic golden era: the personal piety and selfless religious services of the Sahabiyat- the women comrades of the Holy Prophet Muhammad (sa). The  remarkable  lives and services of our pious elders from the early Muslim community continues to move the truly devout in the Divine Path in every generation of the Muslims. It is by seeking to honour the blessed memory  of their pious deeds and sacrifices through our own every day life that we can claim true kinship to Islamic values in this darkened era, points out Hadhrat Saheb (atba).

Read the Special Address Below:

I wish to congratulate you for the initiative that you have again undertaken to organize this Taalim/ Tarbiyat meeting (11 September 2019) and to deepen your ties of sisterhood and to learn new lessons and teachings which will Insha-Allah benefit you your lives throughout.

Today I have chosen to address you on the following topic:

Exemplary Sacrifices of the Sahabiyat of the time of the Holy Prophet Muhammad (sa).

During the first period of Islam, Muslim women gave examples of sacrifices in the path of religion. These exemplary sacrifices will remain alive in the annals of Islam. These are, for you, examples to follow until the day of Qiyamah.

If you sincerely want the victory of Sahih al Islam, you will have to offer similar sacrifices. For this, you will have to follow and act according to the pattern of these Sahabiyat (i.e., the plural of Sahabiya).

There is so much to tell about the Sahabiyat, but to give you an idea about their frame of mind and sacrifices, I give you some facts:

PARDAH: It is incumbent on a Muslim lady to observe the Pardah, that is to say that the woman must preserve her femininity, her beauty from the eyes of strangers of the opposite sex. When we refer to the example of the Sahabiyat, we see that they did not practice Pardah superficially. Their Pardah was according to the Shariah (the law of Islam). Where the Shariah permitted it they did not observe the Pardah in front of the [specific] men [allowed], but when the Shariah did not allow it, they then strictly observed the Pardah.

(1) A Sahabiya lost her son on the battlefield. He died there. She wore her veil and presented herself before the Holy Prophet (pbuh). When they saw this, the Sahaba said to her, “You have come on the news of the martyrdom, and you are wearing the Niqab?” She replied, “I have surely lost my son, but did I lose my modesty?”

(2) Hazrat Ayesha Siddiqua (ra) did not observe the Pardah in front of her slave, Hazrat Abdullah bin Salim. She used to speak to him in case of necessity. One day he came to her and announced, “God has given me freedom today. I am no longer a slave!” Immediately Hazrat Ayesha (ra) observed Pardah. And until her death she did not appear before him.

(3) Hazrat Ayesha (ra) recounted: “In the Hajjat-ul-Wida [the last Hajj of the Prophet Muhammad (pbuh)], when people passed alongside us, we used to throw the veil over the face. After they had moved on, we would discover our faces.”

When the command concerning Pardah was decreed, they adopted it, and from then on they never acted otherwise. They have always adopted that way. They have always adopted the Niqaab, and observed the Pardah before any stranger. During that time (era of the Holy Prophet (pbuh)) evil or bad deeds did not spread, as it is the case now, due to the negligence and non-observance of Pardah.

There are girls, even ladies who dress indecently; their clothes take the shape of their bodies and are tight and everything looks like they are naked. This clothing is a manifestation of Satan and Allah (swt) and His angels move away from those ladies and girls who dress like this. And when these women speak with men in a pleasant way, and with their beautiful smiles, laughter and conversations, they tempt such men – strangers – and all that is strongly discouraged by the Shariah because these actions draw the wrath of Allah on those who exceed the limits of Pardah.

I take this opportunity to advise the girls and ladies of the Jamaat Ul Sahih Al Islam to be role models in all Islamic values. I urge you to pray with great attention, concentration and love and to encourage your children and loved ones to do the same. To protect the world against the wave of immorality that is spreading everywhere, I ask the ladies of the Jamaat Ul Sahih Al Islam to observe the Pardah. By observing Pardah, not only will you protect yourselves, but you will also protect your daughters. If this practice spreads among new converts, the future of the world will be definitively assured.

Napoleon said, “Give me virtuous mothers and I will give you a good nation.” It is certainly a great saying, so ponder over these words carefully.

RELIGIOUS SERVICES: For the propagation of Islam, religious services are absolutely necessary. They are a sure way to acquire the pleasure of Allah and Paradise. The Sahabiyat have been very active in this field as well.

1. Umme Sharike propagated Islam very secretly in Quraish families. She was even sent back from Mecca when her secret work was discovered.

2. Hazrat Umme Hakeem was married to Akramah, son of Abu Jahal. She had embraced Islam on the day of the conquest of Mecca but her husband refused and left Mecca to settle in Yemen. Hazrat Umme Hakeem made the trip to Yemen. She explained to him what Islam was, and she managed to convince him. Converted to Islam, her husband Akramah returned to Mecca and went to meet Hazrat Muhammad (pbuh).

3. Hazrat Abu Talha (ra) had not yet converted to Islam when he wanted to marry Hazrat Umme Salim (ra). She replied, “I am Muslim. I cannot marry you. But if you accept Islam, it will be my dowry. I will not ask you anything more.” In the end, he converted to Islam. As agreed, it was the price of her dowry.

4. Hazrat Khansa (ra) was a great poetess. At the time of Hazrat Umar (ra) in the year 16 after the Hijra, the Muslim army was engaged in the holy war. The four sons of Hazrat Khansa (ra) participated at the same time as their mother. She gave good advice to her sons. The four boys threw themselves into battle, singing the praises of God according to their mother’s advice. One after the other, all four of them encountered death and became martyrs in the path of Allah. When their mother heard the news, she thanked Allah for giving such death - of martyrdom - to her sons in these words: “All praises to God Who granted me the joy of being the mother of four martyrs. I will live under the shadow of Your blessing with my children.”

The Muslim women of the Jamaat Ul Sahih Al Islam should follow the example of Hazrat Khansa (ra) and bring up their children so that they are ready for the service that will lead us [the whole Jamaat] to the progress of the religion of Islam. You need to raise your children with love, cultivating in them a religious feeling like the Sahabiyat did. In the end you will have virtuous rewards. Religion – Islam – will also progress and the new generation will be imbued with the same feeling when the burden and responsibility fall on their shoulders. They will be proud to fulfill their responsibility with success and honour, thanks to the education that was instilled in them.

So, before ending, I ask members of the Siraj Makin of Kerala and even those of Tamil Nadu and other countries to give even more of their time to work continuously with dedication and enthusiasm, and without seeking reward or fame for the sake of Allah. And here (for Kerala) I would like to congratulate the Sadr Haseena Sahiba and Naib Sadr Fauzia Sahiba and their central committee and all Siraj Makin for the Taalim/ Tarbiyyat program.

May Allah bless you all, and may your meeting and program of Taalim/ Tarbiyyat be a success from all angles and your sacrifices for the cause of Allah be accepted. Ameen.