The Elixir of Truth in Divine Prophecies 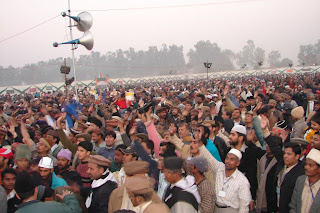 March 23 is an important date in the modern history of spiritual Islam. It was on this Day in 1889 that the the Jamaat-e- Ahmadiyya was established by the Promised Massih Hadhrat Mirza Ghulam Ahmad (as) of Qadian. [Inset: a photo from the 2005 Jalsa Salana at Qadian, which the present writer attended]. He initiated the Bai’at Programme through which devout Muslims could express their allegiance to the Divine appointee. In a special speech to mark the occasion on Saturday, 23 March 2013 the Chosen Messenger of our times, the Khalifatullah Hadhrat Munir Ahmad Azim Sahib (atba) of Mauritius spoke at length about the sacred, foundational prophecies that undergird the belief about the coming of Divine Messengers/Massihs’/Mahdis’ in the Latter Days of Islam. The speech beautifully captures the essence of Divine prophecies foretold in the sacred writings of Muslims, Christians and the seers of other religious. It demonstrates how these prophecies have been fulfilled in the times of the Promised Massih (as) and also reflects on their contemporary significance. The spiritual outlook regarding the continuity of Divine revelations and the appearance of Divine Messengers in future, who will speak with the Holy Spirit, as emerging from the writings of the Promised Massih (as) and as discussed in the speech must be of special interest to devout Ahmadis.

Read the Extracts from the Speech:

Today 23 March 2013 establishes 124 years since an event took place in the once unknown small village – Qadian – situated in the province of Punjab in India. It was an event destined to change the course of history. In Islamic literature, the Quran predicts a thousand years during which Islam will suffer an extraordinary decline.

“He regulates His command from the heaven to the earth; then shall it ascend to Him in a day the measure of which is a thousand years of what you count.” (As-Sajdah 32: 6).

The Holy Prophet (peace be upon him) has predicted that this decline will not begin until three hundred years after his advent: “The best century is the one in which I live, then the second and the third will be good, afterwards lies will spread, truth shall disappear; cruelty, excesses, differences and divergences shall appear”. (Miskat, Bukhari & Tirmidhi).
Read more »
Email ThisBlogThis!Share to TwitterShare to FacebookShare to Pinterest
Labels: Ahmad, Ahmadis, Ahmadiyyat, Bai'at, Budha, Essene, Faith, Khailafat, Khalifathullah, Khudrat-e-Saniyah, Munir Ahmad Azim, Musleh Maoud, Seal of Prophethood, Taqwah

Hadhrat Maulvi Hakim Nuruddin (ra) (1841-1914) was the foremost companion and disciple of the Promised Massih Hadhrat Ahmad (as).  He was a man of wide learning in a range of subjects. And he displayed an abiding interest in understanding the spiritual universe all though his life. Hadhrat Ahmad (as) held him up as an excellent example of devotion and piety, as he said:
How good would it be if every member of the community were a Nur-ud-Din;
So would it be if every heart were filled with the light of the certainty of faith.

It is no accident, then, that after the death of the Promised Massih (as), the Ahmadiyya Community elected him as Hadhrat Khalifatul Massih Awwal. During his life time as the Khalifa Awwal, Hadhrat Hakim Nuruddin (ra) contributed his measure to lead the Community in the straight path of Sahih al Islam.

The mainstream Ahmadiyya Community has now, however, clearly moved away from the path of Sahih al Islam. It is most evident in their concept and understanding of Khudrat-e- Saniyah. They agree that ‘Islamic Khilafat’ is the Khudrat-e- Saniyah. However, in the mainstream understanding, Khilafat or Khudrat-e- Saniyah has only one form till the Day of Judgement: an assembly of faithful electing their chief as Khalifa. It cannot include, in their view, a divinely raised Mujaddid any longer (God Forbid). Thus, they have reduced the meaning of Khudrat-e-Saniyah from the spiritually appealing and historically accurate way in which the Promised Massih (as) understood it and Hadhrat Khalifa Awwal explained it to the community.