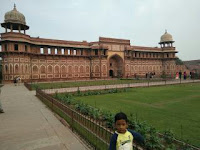 Acceding to the request and invitation of his disciples in Delhi, Khalifatullah Hadhrat Munir Ahmad Azim (atba) of Mauritius and the blessed members of the Household agreed to include a visit to Agra and Delhi as part of the Tour Programme during the India visit, Alhamdulillah, Soumma Alhamdulillah. Once the Kerala-segment of the India Visit was completed, the Team that included the family of our brother in Delhi and also our brother Sulfikar Ali Saheb travelled to Agra from Kannur Railway Station on the evening of January 22, 2017.

Two days later, on the 24th Tuesday morning, everyone reached Agra, checking into the Hotel and taking rest for some hours. In the afternoon, the Team visited the Agra Fort, one of the World Heritage Sites in India, designated by the UNESCO, marking its significant cultural and historical value.

The Agra Fort was built up by the Mughal Emperor Akbar in the 1560s as his Imperial Capital in red sandstone, soon after consolidating his political sovereignty over North India. At one point of time in history, Agra Fort was the highest political seat of the Government of India or the capital of the Mughal Emperor so as to conduct the State proceedings, including the reception ceremonies of Foreign Ambassadors. The sensitive political decisions regarding foreign relations and the internal administration of different State provinces and regions used to be taken at the court so much so that senior officials would have to camp at the place for several days often to have an audience with the Emperor on such strategic and diplomatic and administrative matters.
Read more »
Email ThisBlogThis!Share to TwitterShare to FacebookShare to Pinterest
Labels: Agra, Akbar, architecture, Buland Darwaza, Fatehpur Sikri, History, Islamic art, Jamaat Ul Sahih Al Islam, Khalifatullah, Lahore, Salim Chisti
Older Posts Home
Subscribe to: Posts (Atom)