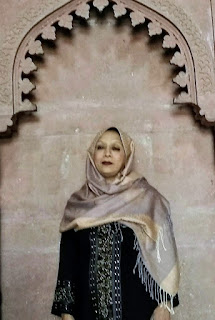 Alhamdulillah, Summa Alhamdulillah, the Siraj Makin- women’s wing of the Jamaat Ul Sahih Al Islam- in Kerala recently organized a Deen-i-Ta’lim programme, the second of a series of study-circle meetings being planned for the year. The Sadr of the Kerala Jamaat, Rajeena Sadiq Ali Saheba, and Na’ib Sadr Fauzia Jamal Saheba led the meeting proceedings and several activities at the historic Noor’ul Islam Masjid, Mathra on Saturday, 07 March 2020.

In a special message on the occasion, International Sadr of the Siraj Makin Hadhrat Ummul Mu'mineen Fazli A. Varsally Saheba encourages women comrades of the Jamaat Ul Sahih Al Islam to transform themselves into inspirational role models for all true devotees and lovers of God Almighty. Critical to bringing about this profound change at the personal level is the individual believer's ability to identify with, and to renew in their own lives and social circles, the extraordinary legacy of the early Muslim women who sacrificed their all for their faith/convictions- seeking only the pleasure of God, notes Hadhrat Saheba in this discourse.

Read the Special Message below:

By His grace, Allah has enabled you to once again reunite to praise Him and to organise yourselves and put forward your queries and insecurities in the field of Dawa and Tarbiyyat works. All praise be to Allah Who has enabled this meeting.

Alhamdulillah, it is an opportunity for you to look at your past works and to deliberate in a most humble way about the next steps to be taken to guarantee progress in your works as representatives of the women of Islam in your country. Your works should be done in a great way which invites the pleasure of Allah upon you.

The highlight of meetings is to learn from past mistakes and perfect yourselves to cater for other works which Insha-Allah shall be accomplished righteously. Visiting homes, feeding the poor, teachings them Islam, sharing your knowledge about languages and seeking to help in translations works- all these are the recipes of a good spiritual worker.

Armed with Taqwa and courage, a woman can do many things worthy of the praises of Allah in her life. But for this blessed work, she needs the encouragement of her husband and father also who help her and all the sisters of the Divine Manifestation to progress in their spirituality by moulding themselves in the images of the women of Islam at its very beginning.


The women of Islam who devoted their all to Islam sacrificed themselves in many ways. They contributed financially to Islam’s projects and progress, they educated the other women, they formed such a force that the men themselves were inspired by them.

These women went through martyrdom of many kinds, but they did not rest until they accomplished their works in splendid ways. They served Islam righteously in their own capacity. They became examples to follow.

You also my dear daughters should strive to become examples whom others follow. When they see you, they see Islam, the true Islam, the true teachings of Islam. It may seem that I keep repeating my message, but this is the necessity of the time, for as the Khalifatullah (atba) keeps saying: “We should keep repeating things and bring them to fruition (accomplishment) just as Allah repeat His verses to make mankind understand His messages and to act upon them.”

To this end, I invite you to prepare your own syllabus in respect of educating our own members [let me have an apercu of your ideas and propositions for this year 2020], and to send to the Khalifatullah and to me for review and Insha-Allah, I will send other guidelines after approval from the Khalifatullah, Insha-Allah.

May your endeavour in Allah’s cause always be coupled with success. Ameen.