Spiritual Meeting in Kerala: A Report 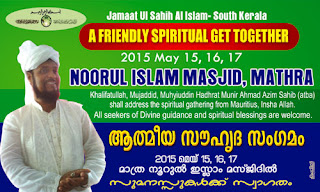 Members of the Jamaat Ul Sahih Al Islam from across the State of Kerala (India) assembled at the historic Noor’ul Islam Masjid, Mathra between 15-17 May 2015. Brothers, sisters and children of the Jamaat came for the Special Get Together Programme with the broader objective of shared learning, mutual discussions and to perform collective prayers and to develop spiritual solidarity in an atmosphere of informal cordiality within the fraternity. Brothers and sisters from Palakkad, Alappuzha, Kochi (Ernakulum), Kodungallur and Kaliyikkavila, and also from Delhi, reached Mathra to join our Sahih Al Islam families in the place, ahead of the scheduled commencement of the Three-day programme. 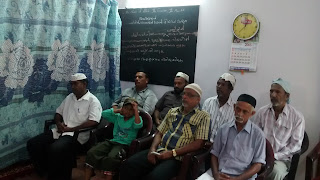 On Friday, the 15th May 2015, all members assembled together at the Masjid for the Jum’ah Prayers. In the second-half of the Jum’ah Qutubah, the Amir Jamaat, Mukarram R. Jamaluddin Saheb formally declared the commencement of the Programme. The Three-Day Programme had a different format altogether: 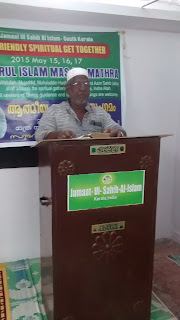 Brothers were routinely encouraged to recite the Holy Qur’an in Arabic along with the Translation of the verses in Malayalam and the meeting speeches were held in close proximity with prayer timings so as to allow all our women members (who were otherwise busy also to prepare food for the gathering) also to take part and listen to the special Speeches being made at the Mosque.

In his remarks, the Amir Saheb viewed the Programme as an occassion to come, stay and pray together in an atmosphere of brotherly affection and friendly discussion about various spiritual matters and religious questions. Strengthening our faith and beliefs in solidarity with like-minded people becomes possible through our active and informed participation in such spiritual proceedings, he noted.

In the second session after Namaz-e-Aser, all members listened with rapt attention to the special Speech from Mauritius delivered by the Khalifatullah Hadhrat Munir Ahmad Azim Sahib (atba) on the occasion. Hazrat Mukarram Fazil Jamal Sahib provided the Malayalam translation of, and supplementary notes on, the Speech for the benefit of our members present. As the speech of the Khalifatullah (atba) touched upon a critical issue at the heart of our very spiritual life, the gathering sought to absorb the message in full measure- obedience to Allah and His Messenger leads to unity and solidarity within the community, testifying to right personal beliefs and integrity of practice. 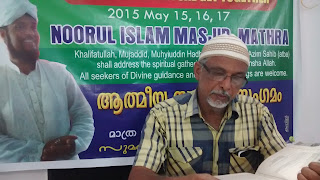 In the third Session after the Maghrib-Isha’ prayers, Mukarram Amir Jamaluddin Sahib gave discourse on the Holy Qur’an, based on the Introduction to the Holy Qur’an, written by the Khalifatullah (atba) as part of a voluminous Commentary of the holy book under preparation and to be published by the Jamaat in future, Insha Allah. (Inset: Recitation of the Holy Qur'an by K. Saleem Saheb). 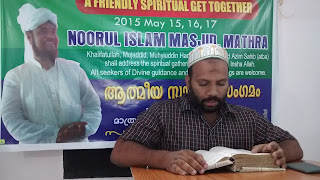 On 16th May morning, the Fajr prayers were followed by the Darsul Qur’an. the Amir Saheb explained the qualities and attributes of true believers. In the second session of the day, an hour ahead of the Zuhr namaz, the topic of Speech was on the codification history of the Holy Qur’an and the development of the sciences of the Qur’an through the centuries. The Amir Saheb explained the topic on the basis of the writings of the Khalifatullah (atba) on the subject.(Inset: Recitation of the Holy Qur'an by Sulfiqar Ali Saheb). 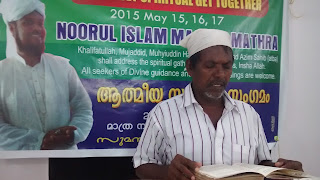 After the Aser Namaz, the third session was held on the subject of Hypocrites or Munafiqun. As the class of the Munafiqun  emerges from the people who originally penetrate the ranks of the believers and deceivingly agree to assist a Divine Messenger, the Amir Sahib wished that each member to be critically aware of ones’ own self and be wary of satanic impulses. The Amir Saheb wanted all members to make a deep study of a Book entitled the “Real Face of the Hypocrites” written by the Khalifatullah (atba) and introspecton our actions against the backdrop of, and in the light of, our own publically-declared beliefs.(Inset: Recitation of the Holy Qur'an by K. P. Shamsuddin Saheb). 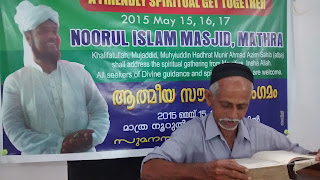 After Maghrib and Isha’i prayers  in the evening,  the subject of Munafiqun was continued, with the Amir Saheb expounding on several verses of the Holy Qur’an to unravel the different manifestations of Munafiqiat that can raise its head in faith communities, based on the historic experiences of the early Muslim community and recurring verses of the Qur’an on the subject.(Inset: Recitation of the Holy Qur'an by T.E. Ummer Saheb). 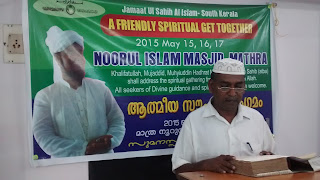 On the 17th of May, on the Third Day of the meeting, after the Fajr prayers, the Amir Saheb led a Darsul Qur’an on Ayat-ul-Kursi and the final three chapters of the Qur’an, explaining the grandeur and majesty of the Unique Lord Almighty and the significance of the concept of Tawheed in our spiritual pursuits in this life. In the second session after the Zuhr Namaz, the discourse was on Surah Nuh. After the Namaz-e-Aser, there was a session on family counselling, where the Amir Saheb provided Islamic guidance on dealing with problems emerging in the context of troubled relations; ethical guideposts for decent living among the family members, resolving differences amicably. (Inset: Recitation of the Holy Qur'an by  P.K. Shamsuddin Saheb). 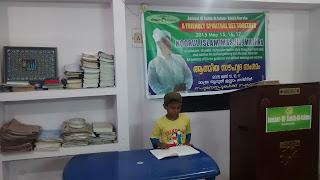 After the Maghrib-Isha’ prayers, Prize was awarded to our little Master Zachariah Ibn Zain for fine progress in his basic religious studies, comprehension of Arabic alphabets and the invocation of ‘Azaan’. Treasurer of the Jamaat, Janab K. Saleem Saheb presented the Award. 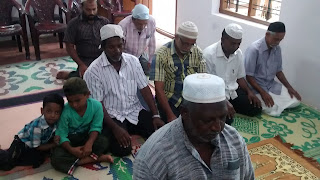 Later, the Amir Saheb continued the discourse on Surah Nuh. Reflections on Surah Nuh is ever-relevant, especially in an age of Divine Manifestation, when a Divinely-raised and guided soul is present in a community to lead them in the path of Allah- in our times Hazrat Khalifatullah (atba) is calling the world to the Word of Allah and the world is largely indifferent to this message, just like in the times of Hazrat Nuh (as).

On the occasion of the Special Get Together, the SIRAJ MAKIN sisters held a separate meeting of their own.  On 18th May morning, Fajr prayers were followed by Darsul Qur’an by the Amir Saheb on Surah Ham Mim Sajdah. A Thanksgiving DUAH was offered for the success of the Programme. Photos of the Programme were taken as a record for posterity. 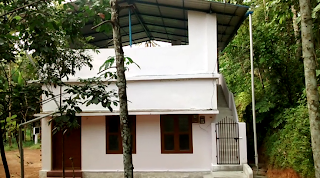 Ahead of the Programme, some infrastructure improvements could be made in the Mosque’s second floor. For the benefit of visiting members, two fans and electric lights were installed, along with a new door for the Hall, Alhamdulillah. Although this is summer in Kerala when the land is hot and humid under a blazing son, on the days of the Programme there were heavenly downpour , both spiritually and physically, replenishing the empty wells in the region, reeling under the barren days of summer in Kerala. As the Programme ended, the members departed with renewed spiritual fervour and verve, turning a new page in their spiritual lives, Alhamdulillah. Summa Alhamdulillah. 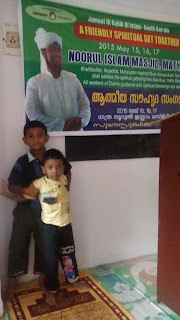 The following members of the Jamaat were able to Participate in the proceedings and other discsussions in the spiritual sessions: