Never Despair: the story of Prophet Ayub (as)

All those who are in the cusp of change in material conditions and stare transition in life situations would benefit from Allah’s help and succor in turbulent times. That is why in the Holy Qur’an, Allah has taught us a beautiful prayer to recite in times of transition from one place or stage or phase of life to another: “My Lord, admit me an entrance of truth and let me exit an exit of truth, and grant me from Yourself lasting authority, to help me.” (17:81)

In his Friday Sermon of July 01, 2011, Hadhrat Khalifatullah Munir Ahmad Azim Sahib of profoundly expounded on the several dimensions of this prayer. He illustrated various situations and conditions that can arise in the life of a common believer by referring to the anecdotes from the history of the Messengers of Allah. Extraordinary trials and adverse circumstances do not hinder a firm believer. With humility, patience and prayer, he goes forward with his mission, regardless of the situation, relying wholeheartedly upon his Lord, always ready to submit to His Will. In this context, Hadhrat Sahib drew the attention of one and all to the life of Prophet Ayub (as):

“Prophet Ayub (as) was born some 1550 years before Prophet Isa (as) and 200 years before Prophet Musa (as). Some scholars disagree on this point; some say that he was a prophet for the Children of while some say that he came for another people. The Bible did not quote his birth place, while some Muslim scholars mention his birth somewhere in . In brief, that which the Bible mentions in Prophet Ayub (as), it mentions that he was a good person who possessed riches be it in form of jewels, money or animals. He had a wife and children, and he used to do a lot of work for religion.

Satan was extremely jealous of him and therefore he (Satan) told Allah: “Allah, You have so much trust on Ayub; You say that he is so much involved in prayers despite him being rich. Just try him and You shall see that he is not sincere.” Satan told Allah: “Let me try him through his riches and You shall see (that he is not sincere).” Allah agreed to let Satan test him. And therefore, the riches of Prophet Ayub (as) was soon depleted. Afterwards Satan asked Allah to try Ayub (as) through his children. And verily he tested him through them and among these children there were some who got separated and others who abandoned him. Despite all these trials, Prophet Ayub (as) remained firm with Allah. 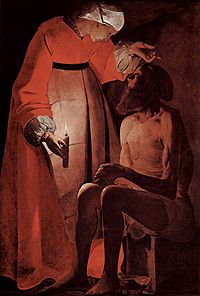 After this, Satan asked the permission to try him through his own body, and therefore Prophet Ayub (as) was afflicted with a skin disease which invaded his entire body (with microbes).

Upon seeing his condition, many people was disgusted and repelled by him and made plots to put him in exile. Despite all these persecutions, Prophet Ayub (as) remained firm and loyal to Allah. As for his wife, Satan deviated her like he once deviated Hawa. He made Shirk (association to God Almighty) to be attractive in the eyes of the wife of Ayub (as); and therefore she used to sacrifice animals in the name of Satan. Thereafter his wife told him: “For how long will you continue to be steadfast with Allah? It would be preferable if you wish for your death.”  [In this 17th century painting by Georges de La Tour, Prophet Ayub (as) is being questioned by his wife]

Prophet Ayub (as) became red with anger and told her: “Even if I am restored to good health, you shall receive 100 flogs because of that Shirk.” His wife also left him and went away. But, despite it all Prophet Ayub (as) remained firm in his faith. It was only after these trials that Allah removed all his afflictions from him and returned to him his family and bestowed upon him much more divine mercy.

There are some scholars who say that Satan penetrated the ranks of the angels to know exactly on the true status of Prophet Ayub (as), but many commentators do not agree upon this idea. They rather think that Satan intercepted the conversation between Allah and His Prophet. After they (the Satans) got to know how much esteem Allah had for Ayub (as), thereafter they hatched this plan to try Prophet Ayub (as).

Concerning the pleading of Prophet Ayub (as) to Allah in these terms: “Harm has afflicted me, and You are the most Merciful of the merciful”, why did it end by “most Merciful of the merciful”? Verily, despite the fact that the Qur'an does not mention the life of Prophet Ayub (as) in details, but with the little information it has given us, we can conclude that these anecdotes are somewhat true. He suffered to excess, thus his ultimate invocation to Allah: “O Allah, all people turn their backs to me; even my wife and children. Those in town do not want me (in their midst). Those who believed in me turned their backs to me, but despite the fact that all these trials befell me, I know that You are the most Merciful of the merciful, and thus You shall never leave me.”

In the aftermath of his invocation, Allah answered his prayer and said: “Therefore We responded to him and took off what harm he had, and We gave him his family and the like of them with them: a mercy from Us and a reminder to the worshipers.” (21:85)

This indeed is a great lesson for the worshipers of Allah that they must never despair, because along with patience and prayer, all problems will accordingly be resolved…”
Email ThisBlogThis!Share to TwitterShare to FacebookShare to Pinterest
Labels: Ayub, Khalifathullah, Munir Azim Sahib, patience, prayer, Unity of God
Newer Post Older Post Home