The Little Girl of Kathua

'And when the baby girl who is buried alive will be questioned about;
For what offence was she killed?'
---Surah Al Takwir, Ch:81: 9-10) 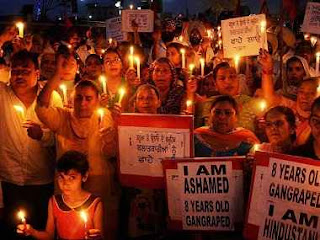 Last month, the kidnapping, gang-rape and brutal killing of an eight-year old little girl in Kathua, in the Jammu region, caused a national outrage in India. And the country witnessed a series of popular protests against the rising tide of horrific incidents of violence against women and girl children in recent years. The government’s woeful record of abject failures in dealing with the question of safety and security of women and girl children was highlighted in these mass mobilizations. Across several cities and townships, public meetings called for ending the prevailing culture of impunity around sex and gender-related crimes. That the Prime Minister Narendra Modi himself was reminded on Indian women’s safety by well-meaning foreigners during his recent tour of Britain speak volumes about the national dishonour and humiliation these institutional failings represent for the people.

The Culture of Indecency and the Sexual Crimes

In the context of rising incidences of violence against women and other sex-related crimes, including rape and killings, the prevailing culture of indecency and the commodification of women’s body are at the center of the debate. Indeed, the connections are hard to miss except for those who are happy to fool themselves. In the name of western values and woman’s freedoms, technology and innovation, fashion and aesthetics, the weeds of immorality and indecency have been allowed to grow and thrive unchecked in media and the public sphere. So much so that the new culture of indecency is striking at the very roots of the societal health. The indecent representation of women in popular culture and social media, in television and over internet, the easy access to pornographic materials- all these are leading to the incitement to evil and more evil.

In his Friday Sermon of May 03, 2013 the Khalifatullah Hadhrat Munir Ahmad Azim Sahib (atba) of Mauritius drew attention to the rising instances of rape and other violence against women in Mauritius and elsewhere. Instead of protecting the honour and dignity of women, the social culture of our times, exploit and dishonour them and degrade their status. The dehumanization of this culture of indecency is so complete that animal passions have blinded the perpetrators to the horrific and brutal nature of their crimes. Indecency has become so pervasive and percolated down to the very edifice of family that, as the Khalifatullah (atba) notes in the Friday Sermon, many of the old women victims have their perpetrators in their own families and close relations. While the recent instances of rape and other sexual crimes in Mauritius only confirm the predictions and warnings clearly made by the Khalifatullah (atba) in his end- of- the- year- 2012 speech, one can only hope and pray that better sense will prevail and that the people will move away from the brink of disaster.