A Visit to Tamil Nadu Jamaats 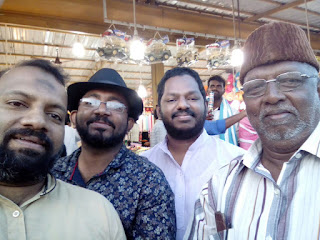 Ever since the formal establishment of the Jamaat Ul Sahih Al Islam in Tamil Nadu, especially with many of our brothers and sisters from the  neighbouring State joining Imam-Jamaat Hadhrat Muhyi-ud-Din Al Khalifatullah Munir Ahmad Azim Saheb (atba) of Mauritius and the respected and honoured members of the holy family for the Kerala Jalsa Salana at the Noor’ul Islam Masjid at Mathra last December; it has been the ardent wish of the members of the South Kerala Jamaat to go and meet our brothers in their own villages. Alhamdulillah, by the Grace and blessings of Allah, Mukarram Amir Jamaluddin Saheb of the South Kerala Jamaat; accompanied by Naib Amir Sadiq Ali Saheb, Secretary Tabligh Sulfikar Ali Saheb, and this humble blogger- recently had the opportunity to visit our brothers in Tamil Nadu- at Kottar and at Meleppalayam/Tirunelveli, and also to visit the site of the proposed first Mosque of the Jamaat in Tamil Nadu, the Siraj-um-Munir Masjid Project near Papanasam; 15-17 June 2019, Soumma Alhamdulillah. 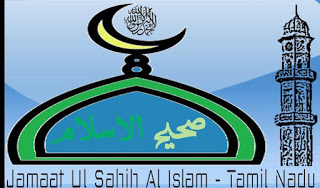 As part of the first-leg of the tour, the south Kerala Jamaat team reached Kottar, a small-town near Kanya Kumari, the southern- most point in mainland India. Having met some of our Jamaat members at Kottar; the Team extended the journey to Meleppalayam/Tirunelveli Jamaat as well. Since two of the team members had not yet been there, the journey was also extended to include the proposed Siraj-um-Munir Masjid site near Papanasam, Alhamdulillah. 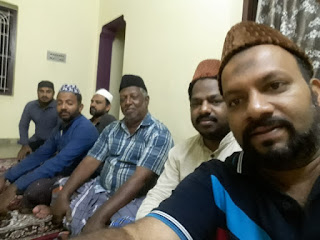 As the journey was undertaken purely with a spirit of solidarity with our brothers in the neighbourhood and planned without any lead-time, we remain deeply grateful for the time, hospitality, and simple kindnesses extended by our Tamil brothers- both in Kottar and Meleppalayam. At Kottar, we could meet with Naib Amir Shahul Hameed Faizal Saheb and Kaleel Rehman Saheb at the Kottar Masjid for the ‘Isha’ prayers on Saturday, 15 June 2019. While the visiting team remained at the Masjid for the night, the local Jamaat brothers returned to the Masjid from their far-away homes in the early dawn for the Fajr Namaz, Alhamdulillah. In our interaction with the brothers for a few hours there, we used the opportunity to discover and learn about the Kottar Jamaat and our fellow brothers and their families who recently took the courageous decision to leave their past behind and embrace the future through the acceptance of the Divine Manifestation in this era, Soumma Alhamdulillah.

This Jamaat of committed members strive to meet often so as to learn and reflect collectively about Islamic teachings and to encourage one another in being good and doing good. Apparently, the women’s wing of the Jamaat- Siraj Makin- is also heavily involved in Tarbiyyat and other important Jamaat affairs, including translation of the Al-Azim Tafsirul Qur’an into the Tamil language.

While reading, reasoning and intellectual reflection are vital pathways to secular understanding and spiritual knowledge as well, Allah (swt) grants special insights to those who desire and seek such Divine guidance in accepting the Truth coming from Him. Hence, during the conversations, it was especially interesting to listen to several anecdotes about pious dreams that led many of our members in Kottar, in their own distinct ways, to recognize and accept the truth of the Divine Manifestation in this era, Alhamdulillah, Allah-u-Akbar.

Acceptance of faith entails often severe challenges for the new believers. In our conversations, the brothers in Kottar spoke freely about the trials they face in living faith in every day settings. As humble believers and devotees of God, they have their own share of severe tests and mind-games to overcome, especially in family and social circles, with the entrenched social and community practices sometimes conflicting with our Qur'anic and Islamic values. For instance, our identity as true Muslims might challenge us to find ways to engage with a social order that has at its roots anti-Islamic norms such as legitimization of interest-based economic system. The Book of God also confirms that Allah (swt) tests people through other people in order to bring out their true potential, and these challenges often involve business relations, matrimonial questions, etc. The stories of how Divine help and assistance reached our brothers at moments of crisis in life would touch our hearts as fellow believers.

In his conversations with the brothers at Kottar, Mukarram Amir Saheb emphasized the need for always remembering the reasons why we took the plunge to join the Jamaat in the first place: from wherever we were before, we are here in this Jamaat to seek the approval and pleasure of Allah (swt) in all that we do. By recognizing Hadhrat Khalifatullah (atba) as a Divine Elect- the one who has been sent in our times to invite us all to the Lord Almighty- and following his spiritual discourses and sincere counsels, we can revive the teachings of Islam in our everyday lives- in spiritual pursuits as well as in secular engagements, Insha-Allah. When we sustain the hard work it entails with diligence, patience and perseverance over a period of time, we would be able to set an example for the world to take note of, Insha-Allah. For working to bring about this profound spiritual and secular transformation, we need to engage and train our children and the new generation of young adults as well about all that we stand for: ‘worshipping Allah through serving humankind’, felt the Mukarram Amir Saheb. 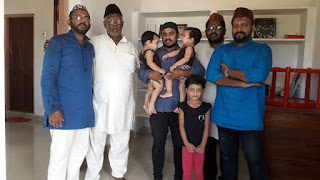 Alhamdulillah, Brother Kaleel Rehman Saheb of the Kottar Jamaat invited the visiting team for breakfast at his home on Sunday, 16 June 2019. While the team had their breakfast at the home, they also met with the family members of our brother, including Kaleel Saheb’s little daughter who sang a well-known Nazm on the occasion:  in praise of the advent of the Holy Prophet Muhammad (sa), Soumma Alhamdulillah. Our brother Rafique Saheb, who is also the brother-in-law of Kaleel Saheb, also joined the conversations, explaining how the Kottar Jamaat recently organized the Ramadan-related devotions, including the collective breaking of the fasting in the evenings. Our brothers in Kottar agreed that as time goes by, interactions between the Jamaat people in the neighbouring States of Kerala and Tamil Nadu will increase, and that the social relations may also be cemented further through business and family alliances, Insha-Allah, Aameen. 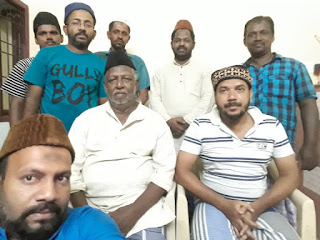 Soon after the breakfast, the visiting team continued their journey to Kanya Kumari and later to Tirunelveli/Meleppalayam where they were received and led to the Masjid by our brother K. Nazeer Saheb. From our conversations with brother Nazeer saheb; Tayyeb saheb; Nuruddin saheb; Rafi saheb (young under-graduate student of Journalism) and the Amir/Jamaat Sirajuddin saheb- we have gained an understanding of the local Jamaat and a profile picture of our members. 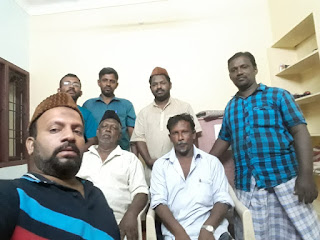 In his brief remarks after leading the Fajr Namaz at the Meleppalayam Masjid on 17 June 2019, the Mukarram Amir Saheb underscored the need for every one of us to remember our duty to God; to respect the commandments of the Qur’an concerning the rights of our fellow beings; to reshape our social lives in accordance with the practices and precepts of the Holy Prophet (sa) and to renew the days of the Prophet (sa) by simply following the discourses and advices of Hadhrat Khalifatullah (atba) on all aspects of our private and public lives, Insha Allah, Aameen. It is only by ‘unlearning’ many things we ‘inherited’ as a social legacy from our past affiliations/sectarian identities- including from the Nizam-e-Jamaat-e-Ahmadiyya- that we will be able to ‘learn’ Islam from the Messenger of Allah (atba) amongst us. ‘May Allah (swt) be our help and assistance in discharging all our sacred responsibilities’, prayed Mukarram Amir Saheb. 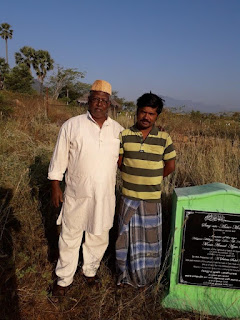 After the Fajr Namaz in the early morning, the team left for the village near Papanasam where the Siraj-um-Munir Masjid project is to come up shortly, Insha Allah, Aameen. The foundation stone for the Mosque was laid by Imam-Jamaat Ul Sahih Al Islam International Hadhrat Muhyi-ud-Din Al Khalifatullah Munir Ahmad Azim (atba) of Mauritius during his hugely-successful visit to India last year, in November 20018, on a piece of land generously gifted by our brother, Naib Ameer K. Saleem Saheb and family, Alhamdulillah. The village looks desolate and forlorn at the moment. However, the emerging signs on the land nearby indicate profound possibilities for the future growth of the whole village, Insha Allah.

Allah (swt) says in the Qur’an: ‘Whoever allies themselves with Allah, His Messenger, and the believers (thus forming Allah’s party), then it is certainly Allah’s party that will prevail’. (Surah Al Ma'dah, 5:56) An extraordinary opportunity to redeem this Divine Promise in this era lies on the shoulders of the Jamaat Ul Sahih Al Islam in Tamil Nadu, and also the one in Kerala: through self-purification/personal reform and dedicated social works/mighty striving in the pursuit of a blissful spiritual and social order for all of God's creatures, Insha-Allah. May Allah (swt) be our mighty help in all our affairs, Aameen.
Email ThisBlogThis!Share to TwitterShare to FacebookShare to Pinterest
Labels: Dawa, India, Jamaat Ul Sahih Al Islam, Jamaluddin Sahib, journeys, Kanya Kumari, Kerala Jamaat, Khalifatullah, Kottar, Siraj-um-Munir Masjid, Tamil Nadu, Tirunelveli
Newer Post Older Post Home