Finding ‘Balance’ in the Trials of Life

The Holy Prophet Muhammad (sa) is reported to have said:

'This life is the dwelling of crookedness; not straightness, and the residence of sadness; rather than happiness. Those who acquire knowledge in its true reality will not feel joy in times of ease, nor grieve in times of hardship. 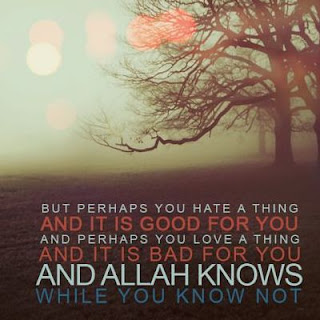 Do not excessively build a life that Allah has decided is bound to destruction, and do not recline to (or like) it. Verily, Allah has ordained on you that you should avoid its danger. Otherwise, you will expose yourselves to His Anger and justifiably earn His Punishment."

This prophetic wisdom is, in many ways, also a summation of the Qur’anic message on the fleeting nature of our fortunes in this world, and that everything is subject to a law of nature or the Divine Law. The Holy Qur’an says, “No misfortune can happen, either in the earth or in yourselves, that was not set down in writing before We brought it into being- that is easy for God- so you need not grieve for what you miss or gloat over what you gain.” (57: 23) Long ago, Luqman the Wise counselled his son to endure with fortitude what befalls and the Qur’an notes: “Bear anything that happens to you steadfastly” (31:17).

Our Wishes and Divine Expectations

The Qur’an alludes to the wisdom behind this balanced approach to our earthly life’s contingent circumstances- fortunes and misfortunes; situations that can and will evolve in the fullness of time in the life of a believer. With a deeply flawed sense of the human self- "foolish and unjust", according to the Qur'an- man is inherently incapable of making the wise decision as regards what is harmful or beneficial for him without Divine guidance. Our wishes, desires and inclinations are to be tempered in accordance with Divine commandments and expectations wherever applicable, depending on the varied circumstances of one’s life.

Allah (swt) encourages the believers to trust in His better knowledge of how things will turn out to be in the end, and of what benefits a person in his present life and the Hereafter. Submission to God and adherence to Divine expectations would better serve and suffice the believer's larger interests, says the Qur’an in its own inimitable style:

“Live with them (your wives) in a goodly manner: if you dislike them, it may well be that you dislike something which God might yet make a source of abundant good." (4:20)

One of the Divine revelations recieved by the Promised Messiah (as) in the previous era on the same theme is as follows:

"God will bestow your reward in full and will be pleased with you and will perfect your name. And it is possible that you hold something dear, yet in reality it is harmful for you; and it is possible that you dislike something , yet in reality it is beneficial for you. God Almighty knows the end results of things and you do not know." [Barahin-e-Ahmadiyya, Part IV, p. 391, UK: Islam Int'l Publications, (2016).

Imam Ibn al Qayyim al-Jawziyya (691-751 AH; 1292-1350 CE), the medieval polymath and classical commentator of the Holy Qur’an, has left behind a deeply insightful exposition on this theme of the Qur’an, advising the believing servants on how to profit from these profound words of the Book of God.

Read the Extracts Below:

In this Qur’anic Verse, there are several judgments, meanings and benefits for the servant. If the servant knows that misfortune can produce a desirable thing, and that the desirable thing can produce a misfortune, he would not feel secure against the harm that can come from delight, and he would not lose hope of delight to come from harm, for he does not know the outcomes of things. Verily, it is Allah Who knows about that which the servant does not know, and in this context the following issues must be noted:
Nothing is more beneficial for him than abiding by the judgments of Allah, even if it is difficult for him at the beginning, because all its outcomes are good, delightful, and pleasurable. In the same way, nothing is more harmful for him than committing what is forbidden, even if he loves it. All its outcomes are pain, grief, evil and misfortune.
Furthermore, the mind bears little pain in comparison to the great pleasure and abundant good that it will experience, and likewise man is expected to avoid little in exchange for great rewards and preventing great pain and long term evil.
In this way, we can see that the perception of the ignorant does not go beyond the basics of life; his perception does not reach the goals, but the intelligent person always keeps his eye on the goals behind his actions in life.

The intelligent person perceives forbidden things like delicious food, which contain fatal poison. Whenever its pleasure arouses his interest, the reality of the poison would push him away from it. Also, he perceives the orders of Allah as bitter medicine that leads to good health and recovery.

Whenever its bitterness urges him not to take it, the reality of its usefulness leads him to comply. This requires knowledge that is more than the rudiments of the religion in order to understand the essential goals. It also requires strong patience to adjust oneself to it, in order to bear the difficulties that will be encountered for the sake of the goal. So if he loses certainty and patience, it would be difficult to achieve the goal, and on the other hand if his certainty and patience is strong, every difficulty would be rendered easy for him for the sake of permanent good and eternal pleasure.
There are other meanings of this verse. It also requires the servant to leave all his affairs in the Hands of the One Who knows the outcomes of all things, and to be pleased with whatever He chooses for him.
Also, the meanings of the verse include the fact that he should not propose or choose for his Lord, and should not ask Him for that which he has no knowledge of, for his harm and ruin may be in it and yet he does not know. He should simply ask his Lord to choose good for him and make him pleased with His choice, for that indeed would be the best ending. Also when he  leaves all his affairs to his Lord, and is satisfied with His choice for him, Allah will support him by providing him with ability, determination and patience. He, the Almighty would also keep him away from the evil that the servant would have encountered if he had chosen for himself. He would show him some of the positive outcomes of His Choice, which he would not have attained if he had chosen for himself.

Such thinking relieves him of the burdens of trying to choose for himself as Allah frees his heart from estimations and arrangements, which fluctuate in difficulty. And in spite of this, the servant would always be surrounded by what was initially preordained for him. If he is pleased with the Choice of Allah, the preordainment would grant him what is praiseworthy, worthy of thanks and worthy of Allah’s Mercy. Otherwise, the preordainment would incur on him all that is dispraised and unworthy of Allah’s Mercy, because it was his own choice. When he truly leaves his affairs to Allah and truly becomes pleased with that, he would be surrounded by kindness and care in the preordainment, and he would be under the care and kindness of Allah. His Kindness protects him from that which he fears and His Care makes it easy for him to bear that which He preordained.

When the pre-ordainment is implemented upon the servant, the greatest cause of its implementation would be his trying to avoid it. Therefore, there is nothing more beneficial for him than submission".