Eid-ul-Adha: The Significance of 'Qurbani' 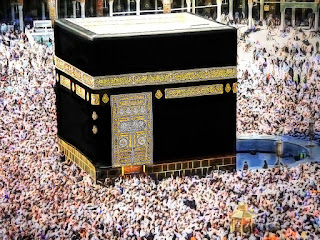 Every religion has certain rituals. They are worn as ornaments and become the very face of religion. It is important to value these rituals in order to situate oneself in religion. Islam is a religion that includes two days of the year that are celebrated ritually and which therefore have more religious significance than others: Eid-ul-Fitr and Eid-ul-Adha.

Note that these two festivals each have a special prayer. In fact, before the arrival of the Messenger of Allah (pbuh) in Medina, its inhabitants celebrated two other days of the year. When the Prophet of Allah (pbuh) arrived there, he said, “You had two days when you would play, but Allah (swt) has given Muslims something instead that is better than them: the day of Al-Fitr and the day of Al-Adha.” (Nasai)

The days of Eid are the only festivals of the Islamic calendar. These two days of celebration each include a special prayer. The Muslim therefore celebrates his festivals with more prayer and fervour in thanking his Lord for all the favours He pours on him. It is therefore with an additional prayer that the Muslim expresses his joy while thanking his Creator. 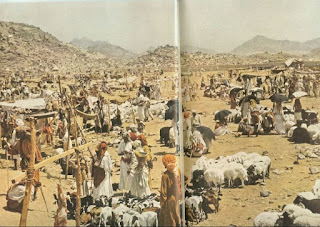 And on the occasion of the Eid-ul-Adha, it is with the sacrifice of an animal in the name of Allah that he thanks his Lord and shows generosity to the poor.

The term “Qurbani” is derived from the word “Al-Qurban” which means any work that leads to divine proximity. Thus, every religious service is called ‘Qurbah’ or holy work and especially sacrifices. (Inset: a picture from the Hajj of 1953 when the pilgrims were able to choose the animals they wanted for Qurbani and would keep their livestock with them during the Hajj)

The Holy Prophet (pbuh) reports that our Lord (Allah) has said, “My servant constantly approaches me by performing additional acts of devotion until I grant him My affection. Thus, I become his ear by which he hears, his eyes by which he sees ... And if he asks Me something, I grant it to him and if he seeks My protection, I protect him.” (Bukhari). 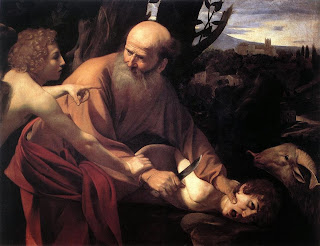 This day of Eid-ul-Adha leads us to reflect on the sacrifices offered by Ibrahim (as) to his Lord: the hardships of emigration, being thrown into the fire and being separated from his family among others. And moreover, Allah the Exalted ordered him to sacrifice his son Ismail (as). He submitted to the divine will and placed the knife on the neck of his son to slit his throat.

It is to revive the memory of the spirit of sacrifice of Ibrahim (as) that one is called every year to sacrifice animals during the days of Eid-ul-Adha. The sacrifice of animals during the 10th of Dhul-Hijjah is an integral symbol of Islam. Allah the Exalted said: “And the camels and cattle We have appointed for you as among the symbols of Allah.” (Al-Hajj 22: 37). 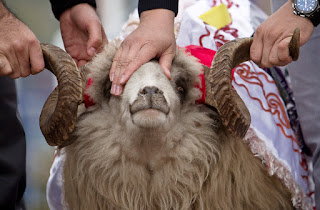 Hazrat Aisha (as) narrated that the Holy Prophet (pbuh) said: “No act performed on the Day of Nahr [by son of Adam] is more beloved to Allah than shedding the blood (slaughtering the Udhiyah).” (Tirmidhi).

The Qurbani or Udhiya is obligatory on every Muslim who has the means, from the verse of the Quran of Surah Al-Kawthar: “Perform prayer (Salat) for your Lord and sacrifice.” (Al-Kawthar, 108: 3).

This verse holds different shades and interpretations. From this it is also mentioned that the command to sacrifice, to perform the Qurbani/ Udhiya (of an animal) is obligatory, just like the Salat. In fact the sequence of performing Salat of Eid-ul-Adha first and then go to sacrifice is explained by the Holy Prophet (pbuh): “Today the first rite will be Salat. Then, we will return to complete the Qurbani. Whoever followed this sequence really followed our Sunnah. He who slaughtered his animal before the Salat, then it is not the Qurbani, but only meat for his family.” (Bukhari).

It is reported from an authentic Hadith of Ibn Majah that Abu Huraira (ra) narrated that the Holy Prophet (pbuh) said: “He who has the means and has not made arrangements to accomplish the Qurbani, then he should not approach our Musalla (i.e., he should not come to perform the Eid-ul-Adha prayer with us).” 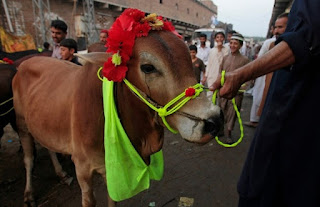