Report on the Fifth Jalsa in Kerala 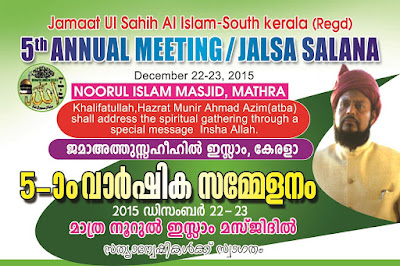 Brothers from Alappuzha and also from Delhi, reached ahead of the commencement of the two-day programme. Members listened to speeches and engaged in extended conversations, discussing the finer points of being a believer in these difficult times where the world around us is largely indifferent to Tawheed and all that it entails in our private lives and public conduct. As a community of people with shared interests and concerns, common goals under the banner of Jamaat Ul Sahih Al Islam and the Imamat of the Khalifatullah Hadhrat Munir Ahmad Azim Sahib (atba) of Mauritius, the brothers and sisters viewed the get-together as an opportunity for soul-searching and critical self-reflection. 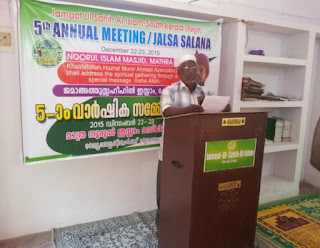 On the first day, all brothers and sisters collectively offered the Tahajjud prayers and it was followed later by the Namaz-e-Fajr.  Mukarram Amir Jamaluddin Sahib conducted a Dars-e-Qur’an, immediately after the Fajr Namaz. In his speech, the Amir Sahib pointed to the subtle verities of spiritual wisdom contained in Surah Al Asr. Firm belief, enduring good deeds, patience and steadfastness against all odds--- mark the charcater of all true and sincere believers in every age, reminded the Amir Sahib in his sermon.

At 9.00 a.m, all members assembled for a new session. Recitation of the Holy Qur’an and Translation was done by brother Y.K.Hariz Sahib of Alappuzha. 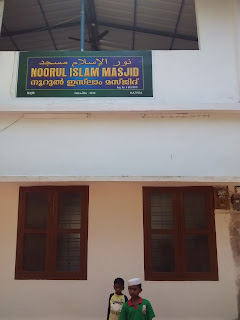 Hazrat Mukarram Fazil Jamal Sahib offered a welcome note to the gathering- pointing to the five years of progress we have had as a Jamaat in India, as followers of the Divine Manifestation of our times, first witnessed in Mauritius in the august personage of Hazrat Khalifatullah (atba) Munir Ahmad Azim Sahib in the last decade.

This was followed by the recitation of a Poem by our brother Salim Sahib of Alappuzha; the poem being a Malayalam Translation of an Urdu poem originally written by the Promised Massih Hazrat Mirza Ghulam Ahmad (as) of Qadian.

The special Message of the Khalifatullah (atba) for the Jalsa Salana was translated into, and read out in, Malayalam by Dr. Haseena Masood Fazil Sahiba (Sadr, Siraj Makin) to the gathering. The importance of healthy lifestyle for physical and spiritual well being was underscored in the profound message with reference to both original Islamic dietary norms and contemporary evidence-based medical findings. The special message would soon be made  available here, Insha Allah 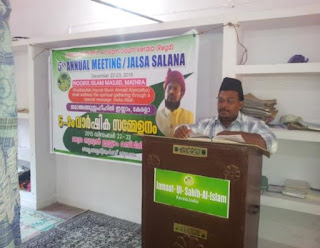 This was followed by back to back speeches by the Amir Sahib on two subjects: (a): “The Kingdom of the Heavens shall be snatched from you”  (How &Why- The reasons that this can happen); (b) “The Divine Manifestation in this Era”.

After the Session Namaz-e- Zuhar was followed by collective Lunch and rest.

At 6.30 pm, the Second Session started. Recitation of the Holy Qur’an and Translation was done by brother D.A.Zainul Abdin Sahib. Fauzia Jamal Sahiba offered the recital of a poetic translation of some of the Divine revelations recived by our Imam (atba) in the last decade. YK Hariz Sahib offered Darus Hadith. 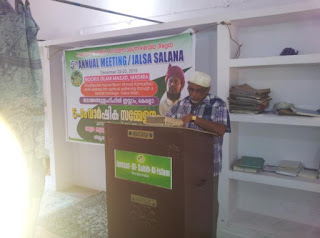 This was followed by a speech by K. Salim Sahib on the subject, Holy Prophet (sa) saying: “I was sent only to perfect moral character”.

The Amir Sahib recited the first ten lines of Al Qaseeda, written by the Promised Massih (as) in Arabic.

Final speech of the session was delived by Hazrat Mukarram Fazil Jamal Sahib on the subject of : “The doors of prophethood and sainthood shall remain always open”.

On 23rd December, Day-2 of the Jalsa, members performed the Tahajjud prayers. Later, Namaz-e-Fajer was offered at 5.30 am. This was followed by the Dars-ul-Qur’an session with the Amir Sahib reciting and explaining the verses 10-12 of  Surah Al Munafiqun, pointing to the need for placing faith above the world and contributing to His cause over all other mundane/material considerations. 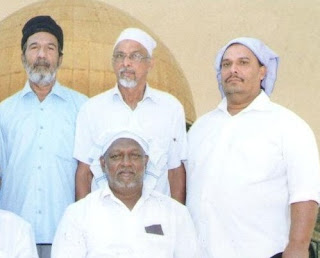 At 9.00 a.m, Third session commenced with Recitation of the Holy Qur’an and Translation by Fauzia Jamal Sahiba. Master Zachariah Ibnu Zain was given an opportunity to recite Surah Al Fatiha and its translation. Mukarram Amir Sahib recited Al Qaseedah of the Promised Massih (as) and he also offered an explanatory commentray on the same.

YK Haris Sahib read extracts of the writings of the Promised Massih (as)- his selection came from the book Kishti Noohu, chapter on “Our Teaching”.

K.Salim Sahib made a speech on the subject, “The persecution of the First Muslims”.

Mukarram Amir Sahib offered closing Speech by once again reading out the full sermon/special message of Hazrat Khalifatullah (atba) for the benefit especially of those who missed out the proceedings on the first day. In the final speech, the Amir Sahib stressed the need for upholding ‘faith and its requirements’ over all worldly-matters and interests.

The members departed from the venue with renewed spiritual fervour and verve after collective Lunch, Alhamdulillah. Summa Alhamdulillah.