'Jihad' in the times of Political Crossfire 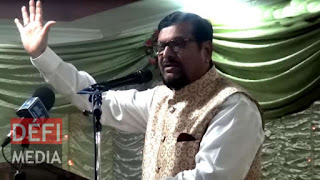 The Vice Prime Minister (VPM) and Minister of Housing and Lands, Showkutally Soodhun caused much harm against the honour and values of Islam when he used unacceptable (wrong) words during an Eid-ul-Fitr dinner/ celebration at Flacq on Tuesday 18 July 2017. He used such words which dirtied the teachings of Islam and his behaviour was not at all like how a true Muslim should act. And he dared to say this in an assembly which was supposed to advocate the values ​​of Islam but on the contrary, what happened? With the words which he pronounced there, despite being surrounded by several Mawlanas, he committed a blunder through the bad language which he used against the Leader of the Opposition Xavier-Luc Duval. And no one at that time deemed it necessary to stop him. 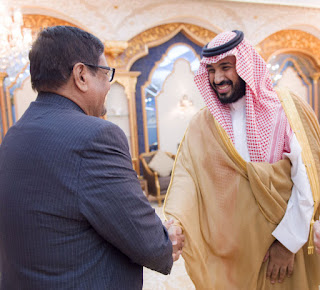 This scandal was triggered first in the Parliament in the Private Notice Question (PNQ) on the subject of the Communiqué (Release) which he himself issued, taking upon himself to break all ties with Qatar (to boycott Qatar) in favour of Saudi Arabia. And the VPM Soodhun was really hurt that the Leader of the Opposition had insulted King Salman. So, during a dinner to celebrate Eid-ul-Fitr in Flacq, he made the following declaration (concerning that which transpired in the Parliament): “Had my bodyguard given me a revolver (gun), I would have killed Xavier Duval in Parliament. I would have killed him… Anyway this is what is called Jihad. Because, I have good relations with Saudi Arabia.” (Inset: Mr. Soodhun with Muhammad Bin Salman, crown prince of Saudi Arabia). 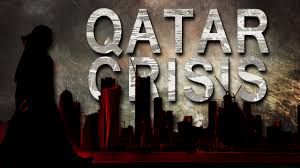 In his stupidity, VPM Soodhun gave a death threat to the Leader of the Opposition and linked the whole thing to Islam by using the word Jihad, and he thus started a scandal, a controversy for which he (VPM Soodhun) is the culprit. He was the one to issue the release against Qatar when it was verily not his role/ work to do so. If there was a need to issue a release, if any, on the subject, then it was the role of the Prime Minister or the Ministry of Foreign Affairs to do so. So, VPM Soodhun acted wrongfully when he issued the Communiqué on 06 June 2017 and after committing this blunder, he used the platform of an Eid party/ celebration to issue a death threat and he used the word Jihad.

The words he used was an incitement to racial hatred.

Mauritius is a rainbow country which shelters several cultures and religions, and all religions live in harmony, with each one respecting the religions of others. But with this skidding of Soodhun with the words he used, this caused a controversy which is being inflamed day after day. Because of a chap like Soodhun, it is Islam which is being targeted (and wounded). The Religion of Islam with its excellent teachings is a religion which preaches peace (and not the use of swords) and peaceful living so that others may acquire peace through your (i.e. the Muslims') peaceful behaviour. 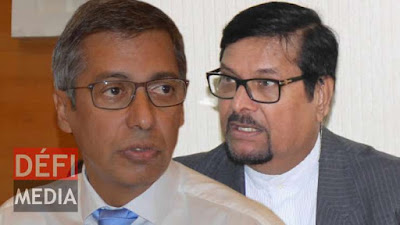 The Leader of the Opposition accused VPM Showkutally Soodhun that he violated the article 288 of the penal code and he denounced the false accusations which VPM Soodhun put on him (Xavier Duval). He denounced the words which VPM Soodhun wrongly attributed to him, denying that which he never said against Saudi Arabia and the Muslim faith. So, the Leader of the Opposition filed a complaint against VPM Soodhun under the Prevention of Terrorism Act. He lodged this complaint after VPM Soodhun issued the death threat against him.
Read more »
Email ThisBlogThis!Share to TwitterShare to FacebookShare to Pinterest
Labels: Ahmadis, celebrations, Eid-ul-Fitr, Hadhrat Umar, Holy Prophet, Holy Quran, Jihad, mauritius, Soodhun, Xavier Duval
Older Posts Home
Subscribe to: Posts (Atom)