Islam on Protection of the Environment 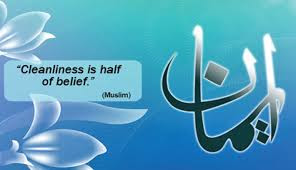 Cleanliness is not a secondary issue. Islam has placed much importance on cleanliness as it is considered an integral part of our faith. The Holy Prophet (pbuh) said: “Purification is half of faith.” (Muslim).

It is also said in the Quran: “Allah does not intend to make difficulty for you; He only wants to purify you and complete His favour upon you, that you may be grateful.” (Al-Maida, 5: 7).

And it also mentions that “Allah loves those who repent and who purify themselves.” (Al-Baqara 2: 223).

However, cleanliness applies not only to the body but it also relates to our environment. The Holy Prophet (pbuh) challenges us: “Keep clean the area in front of your house so as not to offend passersby.”

Then we understand how important it is to properly maintain one’s interior, not only that, but also to respect the environment in which we live, that is to say, our neighbourhood, our city and above all, nature. This is an order of our beloved Prophet (pbuh). Therefore, as Muslims, we must comply to this instruction if we do not want to incur the wrath of Allah (swt) upon us.

Also, do not forget that our behaviour is a reflection of Islam. Others judge our religion through our behaviour. Some believe that a well-kept house is a waste of time and is quite unimportant in the eyes of Allah (swt). Now we have just pointed out that it is not.

The environment is a vital factor for both man and the other living beings. The Most High says: “He brought you into being from the earth, and made you dwell in it.” (Hud 11: 62).

Allah (swt) created the heavens and the earth so that they function spontaneously to “make life easier” for man. He says: “It is He who made for you the earth a bedding, and the sky a canopy; and sent down rain from the sky and brought forth therewith every kind of fruit to feed you. So do not set up equals to Allah while you know.” (Al-Baqarah 2: 23).

The Holy Prophet (pbuh) insisted that the streets be kept clean and free of debris, stones and anything that can impede the passage. Whenever the road was crowded with such things, he used to remove them, and say: “When you remove a harmful object from the road, you are indeed doing charity.” (Bukhari). He was anxious that water intended for human consumption be kept clear and clean. For example, he forbade throwing anything in a water tank, or that the water be used in such a way that it may be rendered impure. (Bukhari & Muslim).

Islam has preserved the environment by prohibiting anyone (especially the believer) from harming it and ordering him to protect it. The Holy Prophet (pbuh) said: “Any Muslim who plants a tree or cultivate land and a bird or a man or a beast eats out of them, it is then considered a charity on his behalf.” (Bukhari & Muslim).

Today, we sometimes forget that being a Muslim is not limited only to our daily worship but that Islam has various extensions that should be part of our lives. How many Muslims actually undertake means and ways to prevent pollution and to protect the environment from harm?


It is other people who are involved in this very Islamic field. And if we still doubt the vital importance of cleanliness in every sense, how is it that non-Muslims recognize its value (more than us)? If Islam exhorts us in this direction, we should be a thousand times more focus on the issue for (compared to us) these people have not received any orders from their Lord, but yet apply them (in their lives).

If Allah (swt) has created the universe and has printed upon it its beauty, then it is for the human being to honour this beauty through the purification of his environment and fighting against pollution.

May Allah help us all to apply ourselves in this area and to please Him by keeping ourselves and our own environment clean in order to give the best example to the rest of humanity. Insha-Allah, Ameen.