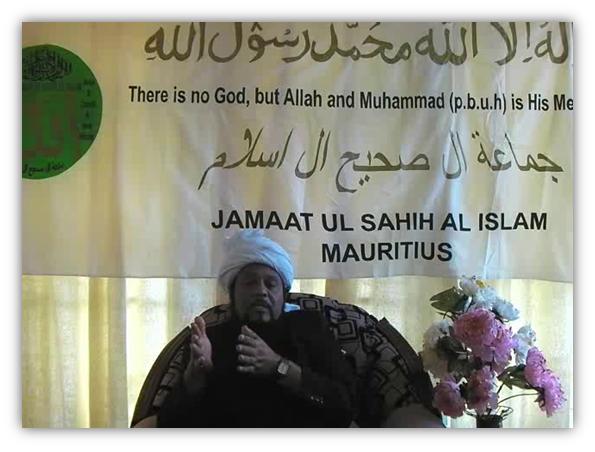 ... I have chosen to talk/explain today on a never-ending subject. I can say that if the ocean was ink and all trees in this world and the universe were pens and the sky and earth were papers, therefore all these would have come to an end but not the commentary of the Surah Al-Fatiha. This is because of the high importance of this chapter in the life of a believer, and this chapter is the first chapter of the Holy Quran. It is so important that one has to start with the Surah Al-Fatiha when he begins his prayer (Namaz/Salat). And to start supplications (duahs) to Allah, the Surah Al-Fatiha needs to be recited first. This is because of the nature of its greatness as a chapter and duah. In whatever situation a person may be, be it a difficulty, an illness or a state of suffering or any other problems he finds himself in, therefore he needs to recite the Surah Al-Fatiha.

By the grace of Allah, today 22nd August 2014, I have thought about explaining a bit again on this very important chapter – the Surah Al-Fatiha. I know that there is no end to the commentary of this Surah. Centuries after centuries after my advent, there shall come many more divinely-sent reformers (Mujaddid), caliphs of Allah (Khalifatullah) and other Men of God who shall keep on explaining on this chapter, Surah, which is the Surah Al-Fatiha.

The word “Fatiha” comes from the verb “Fataha”, which means in this context “to open”. “Al” is a defined article and Fatiha (feminine here because it refers to the word Surah which is feminine in Arabic) means the opening Surah, which starts the Quran because it is that Surah which comes first in the Quran, that is, when you open the Quran, it is that very important key which is required to open the Quran. It is also important as a key to open your heart to your Creator, to show the great extent of love which you have for Him and which enables you to recognise your Lord (Allah) as the Master of the Day of Judgement. And it is Him whom we worship and to Him alone we beseech forgiveness… In addition it is with the Surah Al-Fatiha itself that we are able to open our Salat/Namaz (prayer). It is the first Surah that we recite in the Salat.


Fatiha does not mean to raise both hands – We know that our other Muslim brothers raise their hands, and they say “Fateha!” There is nothing to laugh about. We don’t have to mock them. Perhaps upon raising your hands in prayers and saying “Fateha”, this can mean making the people understand to start their supplications (duah) to Allah with the Surah Al-Fatiha; for this is the key! One’s duah begins with the Surah Al-Fatiha. But very often, there are people who do not understand this. Each person has a way of expressing themselves, and even in expressing oneself, there are meanings behind it which are deep. We often hear our other Muslim brothers – not the Ahmadi Muslims – say “Fateha” upon raising their hands (to start a supplication to Allah). There are some people who joke about this. They say that they say/read “Fateha” to earn money.

The Surah Al-Fatiha has several other names such as: The Mother of the Quran. Do you know what a Mother is? It is through a mother that a generation, a family is born. She can have many children, beginning with the elder. After the eldest children, there is the second child and the counting goes on for as many children that she has. Moreover, upon begetting a child or children, that mother regroups them, just like the similitude which Allah has given us in the example of the hen mother. Despite being drenched or in any kind of weather – rainy, sunny, night – but she would protect her chicks under her wings. A mother protects therefore her children; whatever (positive or negative) way or condition these children are or find themselves in. Despite all this, she will protect them. Similarly, the Surah Al-Fatiha is the Mother of the Quran and that is a very important matter.

There is healing in this Surah. Once, some companions of the Prophet Hazrat Muhammad (pbuh) were travelling. They came to a place and asked hospitality to its inhabitants, but the latter refused to accept them. So they went elsewhere. But it happened that the chief of the people fell ill. They tried everything they knew, everything they could to try to cure him, but in vain. Finally they resorted to the Muslims to treat/cure their leader.

They came and one of them recited the Surah Al-Fatiha on the patient and he was cured by the will of Allah. The people offered a sheep (or more) as gift to the Muslims. They accepted the gift but before eating it, they thought it was better for them to ask the Prophet (pbuh) if it was permissible for them to consume it. The Prophet (pbuh) replied in the affirmative and added that they could even give him a piece (of the mutton). The Prophet (pbuh) naturally did not need a piece of mutton but he wanted to show that this gift was lawful and that it was permissible to eat the meat. (Bukhari, Muslim & Abu Dawud)

The Prophet Hazrat Muhammad (pbuh) said in an authentic hadith that the meaning of Surah Al-Fatiha is the Mother of Quran. It consists of seven oft-repeated verses (recited in Salat in each Rakah) and it is the Heart of the glorious Quran. (Ahmad)

Sayyidina Ubadah ibn As-Samit reported that the Prophet (pbuh) said: “There is no Salat for someone who does not recite Surah Al-Fatiha, the opening chapter of the Quran.” (Bukhari, Muslim)

This is what I have been saying (since a long time). I have witnessed it before and now I don’t know if this practice still exists in the Jamaat Ahmadiyya, that when someone has come late for Namaz in congregation, and reached the Ruku (bowing) posture or when the Imam is upright and reading “Sami ‘Allah Hu Liman Hamida” (Allah hears the one who praises Him), and therefore missed the Surah Al-Fatiha, he thinks that Rakah is counted (whereas it is not so), despite the fact that he missed the Surah Al-Fatiha. For e.g. if the Imam was performing a 4-Rakaat prayer, and that person has reached in prayer in the first Rakah, missing the Surah Al-Fatiha and when the Imam has already reached the Ruku posture or the upright posture after Ruku, and afterwards when the Imam ends his prayer, then that person follows the Imam till the end and considers his prayer complete when it is not so. That is to say, among the 4 Rakaat, he obtained only 3 Rakaat wherein he read the Surah Al-Fatiha and he missed a fourth one – the Surah Al-Fatiha of the first Rakah.

The meaning of Surah Al-Fatiha:

“Al-Hamdu” means: Praise. Praise is greater than thanks. Saying thanks to Allah is good but “Praise be to Allah” is better.

“Lillaahi” means: To Allah. To Allah only, because Allah is the Creator of everything.

“Aalameen” means the worlds. “Al-Aalameen” is derived from the word “Al-Alamoune” which is the plural of the word Al-Alam which means “the worlds”. So “Al-Aalameen” means the worlds and “Rabbil-Aalamine” means Lord of the worlds; the worlds of humans, the angels, and the jinn. And (also) the animal, vegetable, and mineral worlds. Allah is the Lord of all creation, in any place and any time. All creation has no lord other than Allah. He is the Lord of the living and the dead. He has power over all things.

“Ar-Rahman-Ir-Rahim” means: The Most Gracious, The Most Merciful. Almighty Allah is forgiving and merciful. But we must also remember that Allah is also keen to take accounts and is severe in inflicting punishment.

The Prophet (pbuh) in an authentic Hadith, said: “If a believer knew what kinds of punishments Allah has, he would not have had any hope of entering paradise. And conversely if a believer knew how vast the mercy of Allah is, he would never lose hope to receive Allah's forgiveness.” (Muslim)

The Day of Judgement is the day when we will have to appear before God to answer for everything we have done on earth.

(When the Khalifatullah (atba) reached on the subject of Jesus (as), he drew attention to one more argument against the physical descent of the original Jesus whom the Christians and Muslims are still waiting. Jesus (as) came with the Gospels, but supposed that he is to come back again, what book shall he preach to the people? The Gospels or the Quran? Shall he teach a book he did not receive or teach the Book which he received from God Almighty? ... To be noted: In the past, in his other dawa sessions, the Khalifatullah (atba) also referred to the fact that if the other Muslims persist in saying that in the Quran it has been mentioned that he has ascended physically to the heavens, but then if he were to come down again, what shall he do? Erase the words of “has gone up/ been raised” to introduce “has come down”?)

It is essential to depend only on Allah as it is essential to always address our requests and prayers to Allah directly as the seal of the prophets of Allah, Hazrat Muhammad (pbuh) has always done.

There are many people who believe that Allah is One Lord, but they ascribe partners to Allah and, therefore, worship other than Allah. Therefore, they disqualify themselves as Muslims and fall into the category of those who commit Shirk (polytheism) because they worship others than Allah; and Shirk results in hell if the person who is guilty of it does not repent, does not beg and does not get forgiveness from Allah.


Insha-Allah, due to lack of time I will continue this subject in my sermon next Friday. May Allah preserve us from Shirk and carve us all into sincere Muslims throughout our life, with His worship as our sole aim, and that we fulfil our duty to invite the world to Islam, and the sublime benefits of the Quran and of the Surah Al-Fatiha. Ameen.