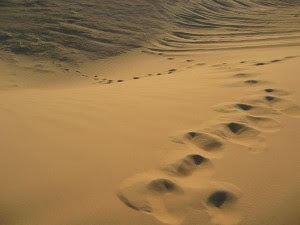 Read the Extracts from the Friday Sermon:
“… And a Muhajir (an emigrant) is the one who gives up (abandons) all what Allah has forbidden.” (Bukhari)

A Muhajir is someone who has done the Hijra, that is, who emigrates. Hijra literally means abandon, leave, displace, move, immigrate etc. In the Shariah (Islamic laws), it refers to the event when Hazrat Muhammad (pbuh) and his companions had to leave their natal town, Mecca to settle in Medina so that they may be free to practice their religion (Islam) freely. Therefore, the companions had to leave behind their wives, properties and all that which they possessed. They went (nearly) empty-handed to settle in Medina with the sole goal to live freely in the pleasure of Allah the Almighty. That was a real enormous sacrifice.

In this Hadith, the Holy Prophet (pbuh) drew our attention that the most important thing is paying obeisance to Allah the Almighty, not the actual moving from one place to another. The emigration from Mecca to Medina was the form of Hijra and the obeisance to Allah was reaching the finishing line (the goal, reaching deep down). It is true that the form is very important but it is also true that the most essential is the goal. A form without the goal is an insignificant matter, even non-existent. That was why the Messenger of Allah (pbuh) did not consider an emigration (Hijra) without obedience to Allah (without first receiving clear instructions from Allah – he did not do it on his own). In the same line of thought, someone living in Europe who is religious is better than someone who lives in Medina but who is not religious, who is not putting Islam in practice.

In this way, the true Muhajir (emigrant) is the one who abandons all that which Allah has forbidden him, even if he lives far away from Medina. This type of Hijra shall continue to exist till the Day of Judgement. Thus, every person who shall abstain from that which Allah has forbidden shall become a true Mujahir and on the Day of Judgement he shall be decorated and honoured like a true Muhajir. In a Hadith found in the Musnad of Imam Ahmad, the Holy Prophet Hazrat Muhammad (pbuh) has said:

“The true Hijra (emigration) means to abstain from immoral acts, visible as well as invisible and that you observe prayer and pay Zakat. After that, you become a Muhajir even though you die in “Khadrama” (a place in Arabia).”

This means that even though one may die in Khadrama, which is a place (other than Medina), despite this, one is a Muhajir if he (or she) put into practice the commandments of Allah the Almighty and does not break into pieces His orders, because the most important is: obedience to Allah the Almighty.

Once upon a time, a physical emigration to Medina was the only means to practice one’s religion (Islam) freely, without any constraint. Due to this reason, emigrating to Medina became obligatory (at that time). It was obligatory for a specific goal. In itself, it was not necessary. That is why, when the Holy Prophet Hazrat Muhammad (pbuh) conquered Mecca and when Mecca became under the complete control of the Islamic State, the Hijra from Mecca to Medina ceased to be obligatory, because if someone was free to practice his Islam in Medina, therefore, he became equally freely to practice Islam in Mecca also.

But the Hijra in its meaning as abstaining from all sorts of sins shall ever remain in force, for all times. Apart from this meaning, if someone is encountering difficulties to practice his Islam in a certain place, it becomes obligatory for this, and this according to his means to go and establish in another place, wherever and whenever it is possible for him to do so, to a place where he can practice his Islam. Likewise, a person (the Muslim) must maintain distance from such milieus and environments which are unfavourable for his Islam. Thus kind of Hijra shall be applicable for all times. And the same type of person (this Muslim) qualifies to be a true Muhajir, according to the Holy Prophet Muhammad (pbuh).

We can get the answer (to this question) in the light of a Hadith which is found in Musnad Ahmad and Tirmidhi, whereby the Holy Prophet Muhammad (pbuh) has said: “… Abstain from all illicit acts, and you (one who devotes himself in prayer) shall become great from among all people.”

In this Hadith, Hazrat Muhammad (pbuh) has considered abstention from all illicit and forbidden acts as the most essential element which enables a person to become a great practicant (of Islam). To explain this, the scholars of Islam say that obedience to Allah the Almighty constitutes of two elements:

But abstaining from illicit acts are most difficult (for people), but then it becomes all the more important to abstain from them. If someone has this in him to refrain from the forbidden, he shall execute the commandments of Allah the Almighty best. Perhaps that is why the Messenger of Allah (pbuh) has mentioned that one element in the hope of attracting attention to it and to put emphasis on its importance. Otherwise, without executing the commandments of Allah the Almighty, a person cannot become a true Muhajir. If the Holy Prophet Hazrat Muhammad (pbuh) only mentioned this one element, this is because this sole element is necessary for the other elements, and once a person has this element well ingrained in him, then this means that he has well grasped the other element also in him.

Now, after explaining on Muhajir, I shall give some explanations on “Hub-bud-Dunya” (Love for this world).

“Hub-bud-Dunya” means attachment to (love for) this world. When someone attaches his heart with this temporal world, therefore this creates in him such maladies as greed, pride, jealousy etc. And these (spiritual) maladies leads man to such sins, like theft, rape, crime which renders society to be unliveable. To remediate all these problems (which there are in society) we must seek a means to deal with “Hub-bud-Dunya” which according to the noble prophet (pbuh) is the root of all sins. It can be remediated by developing love for the hereafter with the help of one who has this kind of love in him. Love for the hereafter has such an effect that it makes that person develop a disinterest for this temporal world without completely neglecting or abandoning this world. He needs to seek this temporal world without letting himself be blinded by this world and without becoming a slave to it.

Man is like a ship which is navigating on the ocean, which needs water to navigate but at the same time without letting water penetrate the ship, otherwise there shall be shipwreck. In the same way, when the temporal world paves a way into the heart of someone, it makes his heart drown and it throws that person in sins and vices.

A person needs from this temporal world only that which he needs to survives this world, and this is obligatory on him (to seek that minimum). But the aspects of the temporal world which makes a person forget the hereafter and which makes him neglect his religion (Islam) are illicit. The separation, the line between both, that is, that which is obligatory and that which is illicit is very thin, that it is difficult to discern it.

Therefore, the presence of a competent spiritual guide is necessary, someone who can make that person go through that difficult phase, that difficult path, safe and sound. A spiritual Guide has always be considered to be necessary, to be indispensible by the true Ulama of all times, one who is sincere in Islam, to be able to develop the necessary equilibrium between Dunya (the temporal world) and Aakhirat (the hereafter).

Let us pray Allah the Almighty that Allah becomes our Guide wherever we may be and may He protect us in difficult times and in such moments which necessitates that we take a decision. Insha-Allah, Ameen.