The Blessings of 'Shabaan'

Preparation for the Month of Ramadan 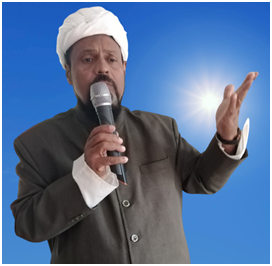 Ḥâ-Mĩm. By the clear Book! We have indeed sent it down on a blessed night [Laylatul Mubarak]. Indeed, We have always been warning. On that night every matter of wisdom is ordained by a command from Us; for indeed, We have always been sending Messengers as a mercy from your Lord, - Surely, He is the All-Hearing, the All-Knowing. (Ad-Dukhan 44: 2-7)

Hazrat Muhammad (pbuh) recited this duah during the month of Rajab: “Allahumma bariklana fi Rajab wa Shabaan, wa ballighna Ramadan.” [O Allah! Make the months of Rajab and Shabaan blessed for us, and let us reach the month of Ramadan.]

There is no doubt that the night of mid-Shabaan is filled with blessings, but it is not equivalent to that blessed night [Laylatul-Mubarak] that the Layla-tul-Qadr represents.

Let us see what is meant by the five names of this blessed night mentioned in Surah Ad-Dukhan and of which Allah and His Messenger (pbuh) have spoken so much:

Laylatul-Mubarak means Blessed Night, filled with blessings. On this night, those who do good deeds get many rewards and blessings. So therefore, this name of night of blessings has been named Laylatul Mubarak because it contains blessings; the prayers of the supplicants are answered and all the blessed people [the pious and those whom Allah desires to forgive and bless] obtain rewards while the sinners are forgiven. The gates of the very high paradise as well as the upper part of Firdaus [that is, the highest part of paradise in all of paradise and which is just below the throne of Allah] are wide open.

Laylatul-Rahma (Night of Mercy) - this name is given to it because during this night Allah’s mercy descends on earth in abundance.

Laylatul-Bara’a (Night of Salvation) - Because on this night, sinners get respite from the punishments administered to them and are released from hell.

Laylatus-Sahk - During that night, Allah (swt) writes down salvation and certifies it for His servants.

Laylatul-Qadr (Night of Destiny) - During this night, Allah changes the fate of those who deserve it on the basis of their faith. This night is filled with blessings worth a thousand months of blessings that represent about eighty-three years of a person’s life in general. This is the night on which the Holy Quran first descended to our beloved Prophet Hazrat Muhammad (pbuh) through divine revelation [brought by the angel Jibra’eel (as)]. It is also the night when the angels and the Holy Spirit descend to spread divine forgiveness and also to inspire hearts to the right path.

I must clarify that the consecutive months of Allah: Rajab, Shabaan and Ramadan are of great importance. These are months of intense training for the believer to consolidate [strengthen] and refine the faith.

Regarding the month of Shabaan, the word Shabaan consists of five (5) letters.

The Holy Prophet (pbuh) said: “People forget this month which is between Rajab and Ramadan [i.e., Shabaan]; Yet this is the month in which deeds ascend to the Lord of the Universe (Exalted be He), and I like to be in a state of fasting when my deeds ascend to Him.” (An-Nasai and Ahmad)

The Holy Prophet (pbuh) also said: “Rajab is the month of Allah Most High, Shabaan is mine and Ramadan is that of my Community [Ummah]”. [Suyuti]

While there are many people who do not believe in this Hadith and call it weak, but after I analyzed this Hadith and prayed, I found that it contains the truth. Of every month, these three consecutive months [which comes one after another] and according to the Hadith that I mentioned earlier and which is compiled by Imam Nasai and Imam Ahmad, then we see that these months are really filled with blessings and that indeed Hazrat Muhammad (pbuh) took so much trouble and gave much importance to prepare for the month of Ramadan by also observing the fast during the month of Shabaan. And as well as the month of Rajab.

Likewise, the months of Shawwal and Dhul-Qaddah are also months filled with blessings in preparation for the month of Hajj [Dhul-Hijjah].

So, admitting that the Holy Prophet (pbuh) said that Shabaan is his month, it shows us the greatness and the value of that month in general. Truly, this is an opportunity for all believers to do their best to be forgiven by Allah before welcoming the month of Ramadan.

You have received the month of Shabaan as a month of training in order to fully prepare yourselves to welcome this great month [Ramadan], a month in which one of its nights is Laylatul-Mubarak, the night that is worth more than a thousand months of blessings and during which Allah sends His angels and the Ruh’il Quddus; that is, the Laylatul-Qadr.

No one in this world can enter paradise without the grace of Allah, even our master Hazrat Muhammad (pbuh). But as you know, Hazrat Muhammad (pbuh) has already received the good news of Paradise. Allah surrounded him with His grace to such an extent that all people until the Day of Judgement must send the Darood upon him, that is, when we hear his name “Muhammad” [when we talk about him - not another Muhammad], we have to say, “Sallaahu alayhi wa sallam” (May blessings and peace be upon him).

Bear in mind that despite the fact that the Rahmatul-lil-Aalameen (blessing for all the universe), our beloved prophet Hazrat Muhammad (pbuh) received the forgiveness of Allah and the good news of paradise, but nevertheless he did not stop turning to Allah in prayers and thanking and asking Him for forgiveness. He was a grateful servant to his Creator. So, weak creatures that we are, filled with shortcomings and sins, must we not turn to our Creator and strengthen our faith and make it become more refined and solid?

So the Muslim should turn to Allah with a sincere heart and while expressing his regret and shame for the sins he has committed apologize to Allah (swt).

Here I present to you in brief how to do the Tawbah [repentance and asking for forgiveness].

The Sayyidul Istighfaar is one of the best duahs for asking Allah’s forgiveness.

In the name of Allah, The Most Gracious, The Most Merciful. O Allah, You are my Lord, none has the right to be worshipped except You; You created me and I am Your servant and I abide to Your covenant and promise as best I can, I take refuge in You from the evil of which I have committed. I acknowledge Your favour upon me and I acknowledge my sin, so forgive me, for verily none can forgive sin except You. (Bukhari)

There are other duahs of repentance with Allah [for seeking forgiveness] that our beloved Prophet used to recite:

[O Allah, wash away my sins with snow and hail water, purify my heart from the sins as is purified the white garment from the dirt, and keep away at a distance the sins from me as yawns the distance between the East and the West.] (Bukhari, Muslim, Tirmidhi, An-Nasaï et Ibn Majah).

Let us also ask Allah (swt) to grant us the good things of this world and the hereafter.

The Holy Prophet (pbuh) recommends us to repeat this invocation during the Night of Destiny (Laylatul-Qadr), the Laylatul-Mubarak:

Allaahumma innaka ‘affuwwun tuhibbul ‘afwa fa’fu ‘annee’. [O Allah, You are the One who forgives and You love to forgive, so forgive me]. (Mishkat, Ibn Majah and Tirmidhi).

During the month of Shabaan and Ramadan and also throughout our entire lifetimes, we are recommended to recite the Darood Shariff abundantly. We must fill our lives with the Ibaadat [acts of worship] for our Creator and send the Darood on His beloved prophet Hazrat Muhammad (pbuh) for Allah accepts our duahs only after we have read the opening of the Holy Quran [i.e., Surah Al-Fatiha] and praised Him and sent Darood upon Hazrat Muhammad (pbuh). Only then, after reading the Darood, any other duahs which are Halal (lawful) in the sight of Allah and with His permission will be accepted and Allah will bless that person, especially in this century when He has sent His Khalifa [one of His Khalifa] (representative) among you who came with the Ruh’il Quddus, and where my whole life, this same life that you all are living by witnessing to my advent, is a blessed night, a Laylatul-Mubarak where Allah has sent [down] His Messenger with revelations to turn this dark night, this darkness into a night of blessings. And the duration of this night is the length of the life of this Messenger of Allah who has come in obedience of his master Hazrat Muhammad (pbuh). So whoever obeys Allah and the Khalifatullah of this century, verily his whole life will be a Laylatul-Mubarak - his life will be filled with blessings from Allah and Allah will always help him if he does not lose his/ her trust in Him and remain firmly attached to His Messenger in this blessed century. Insha-Allah, Ameen.

Before ending [my sermon], I would like to share with you a Zikrullah, a very important glorification with which to glorify Allah. This glorification is:

[There is no other deity but Allah; The Unique One without a partner. His is the Kingdom, and His is the Praise, and He is powerful over everything]. 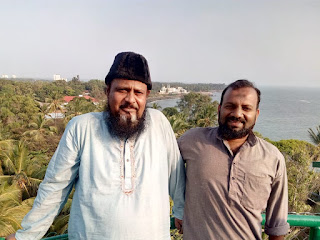 One of my dearest disciples, Sulfikar Ali Sahib [around mid-March] was instructed to recite this same Zikrullah in his Kashaf (vision). [Inset: Hazrat Khalifatullah (aba)  with Sulfikar Ali Sahib during the India visit of 2018]. This vision is as follows:

Someone invites him to a public function, and he goes along with the person- despite not really knowing what kind of a function/programme it is. As he reaches the venue, he finds a grand stage with a large/spacious arena, and the look of the place indicates that people in large numbers are to assemble there for some programme. Then he hears a voice which recites the following Zikr/Duah, urging him to recite it every day for 100 times:

Masha-Allah, Allahu Akbar ! May Allah continue to bless my disciples and followers and make them shining stars in this Laylatul-Mubarak that we are living in this century. Insha-Allah, Ameen. Mubarak Ho to all who have recognized the signs of Allah and who remain attached with the Nur (Light) of Allah in this century, so that all darkness in our life, as well as in the world, may be removed. Let everything black become white. Insha-Allah, Ameen.