'Some words can lead to Sin'

The Fine Line between 'Good' and 'Evil'

The meaning of Taqwa is to abstain from wrongdoing in such a manner that even the very fine lines around it are not crossed. Remember, however, that goodness is not that a person should consider himself to be ‘good’ because he has not usurped another’s rights or stolen another person’s property or that he has abstained from lying and adultery.

Remember, even talking such loving words to other persons other than those permitted may make the person incline towards the sin of adultery. It must be borne in mind that such behaviour can become a sin, for Satan seizes every little opportunity to make ʻgood’ become ʻbad’. That is why, every believer, man or woman must guard against this grievous sin, and preserve himself or herself as the Holy Quran advises:

“…If you fear Allah, then do not be soft in speech, lest he in whose heart is disease should covet, but speak with appropriate speech.” (Al-Ahzab, 33: 33).

So, mere words can become prelude to a major sin which is adultery. This is indeed grievous in the eyes of Allah. The punishment for this is severe. So, no excuse about this. 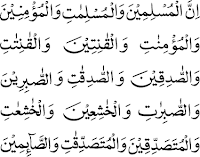 That is, God is with those who abstain from bad acts and who also do good deeds.

However, attaining such a state of true belief and complete truthfulness and manifesting signs of total and sincere loyalty to God is a difficult task indeed.It is the case that when a person acquires a deeply sincere and true belief (in Allah) there are manifested many signs of such a state. And there are also trials that he undergoes to test his faith and sincerity.

And especially, by the grace of Allah the month of Ramadan is coming Insha-Allah. Every one of you should try your best to do maximum good deeds and reap the pleasure of Allah.


The 'adultery' of  casual chatting

Remember this point well that the mere abstention from bad deeds is not in itself worthy of being considered an outstanding act unless there are also present good deeds. There are many who have never committed adultery (Like I said earlier, adultery can take many forms, e.g. Chatting with friends, which starts casually “as a friend”; then, intensified till the point of saying “I love you” and some even go further to exchange pornographic words, pictures and videos) or murder (e.g. killing someone to acquire his property or to extract revenge etc.), nor indulged in theft or robbery, but despite all this they do not perform any acts manifesting true loyalty to God nor do they serve mankind in any way. Such kinds of people can even harbour hatred in their hearts for others, insulting them and having no sympathy for them. They may even look to others as small, as if he or she is superior to the others and that he or she is always the one who is right.

Be careful of even minor misdeeds

Therefore, these kinds of persons, despite not indulging in major sins such as adultery or murder, yet they ignore the ways of Allah and do not perform any act manifesting true loyalty to Allah nor do they serve mankind in any way. Such people, therefore, have not performed any good deeds at all. It would be an ignorant person indeed who would present such things and enumerate such people among the righteous because such acts (as theft, murder and adultery are generally accepted to be bad and) constitute evil behaviour. It is the case that merely abstaining from these will not lead a person to enter the fold of those who are the ‘friends of God’. It is the practice of God that those who indulge in evil behaviour, those who steal, who are dishonest and those who take bribes, all such people will meet their punishment in this very world - such a one does not die until he has received his punishment. Remember, therefore, that the mere abstention from major ills does not constitute goodness.

Taqwa (i.e. righteousness) is a lower stage. Its example is like the container that is cleaned thoroughly in order that the best kind of food may be placed within it. If, however, it were the case that the container is cleaned thoroughly but no food is in fact placed within, would this satisfy one’s hunger? Certainly not! The same applies in the case of Taqwa. What is Taqwa ? It is merely that which cleanses the vessel that contains Nafs-e-Ammara, (i.e. the self that incites to evil).


With these words I end my sermon today.

O my disciples, try to understand this sermon and be careful of your actions. I pray may Allah forgive all of you and bestow upon you the inner and outer qualities of good believers, such believers who are truly Allah’s in every way. Insha-Allah, Ameen.