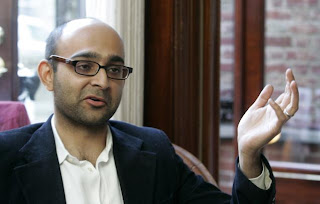 For the benefit of our readers, we reproduce below an essay on the cult of militancy in Pakistan from one of the leading writers from contemporary Pakistan, the Award-winning novelist Mohsin Hamid who is the author of the novels 'The Reluctant Fundamentalist' and the forthcoming 'How to Get Filthy Rich in Rising Asia'. The essay was originally written for, and published in, the New York Times. India’s leading newspaper, The Hindu also carried it on February 24, 2013].
At the heart of Pakistan’s troubles is the celebration of the militant
On Monday, my mother’s and sister’s eye doctor was assassinated. He was a Shia. He was shot six times while driving to drop his son off at school. His son, age 12, was executed with a single shot to the head.
Tuesday, I attended a protest in front of the Governor’s House in Lahore demanding that more be done to protect Pakistan’s Shias from sectarian extremists. These extremists are responsible for increasingly frequent attacks, including bombings this year that killed more than 200 people, most of them Hazara Shias, in the city of Quetta.
As I stood in the anguished crowd in Lahore, similar protests were being held throughout Pakistan. Roads were shut. Demonstrators blocked access to airports. My father was trapped in one for the evening, yet he said most of his fellow travellers bore the delay without anger. They sympathised with the protesters’ objectives.