A RAMADAN in the times of an Elect of Allah 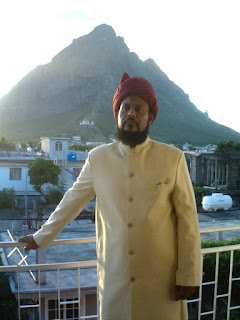 THE HOLY QUR'AN promises enduring divine blessings for the believers. The Holy Prophet Muhammad (sa) confirmed that at the head of every century, the Elect of Allah shall make an appearance- to guide the Ummah in the path of the Shari’ah and to teach them the hidden treasures of the Holy Book and the Divine verities. Allah, the Most High raises whomsoever He wants. And He knows where to place His message. The appearance of the Khalifatullah and Muhyi-ud- Din Hadhrat Munir Ahmad Azim Sahib of Mauritius (atba) in the new Century of Islam confirms the veracity of the enduring teachings of the Holy Qur’an. In a special video message delivered on July 30, 2012 (on the 10th day of Ramadan), the Messenger of Allah of our times calls the attention of believers to the extraordinary spiritual opportunity being made available to mankind by the Creator and reflects on the profound meaning of Ramadan.

Read the Extracts from the Special Sermon:

We are living the days of Ramadan, a glorious and blessed month bestowed to us by Allah so that we can come closer to Him all the more. And if we were negligent to Him and His commandments before, therefore Ramadan comes as a training and a reminder for us to grip firmly to Deen (religion) and not to lose sight of our duty to Allah, to His Messenger Hazrat Muhammad (saw) by following his Sunnah and also to follow the Messenger of Allah, the Khalifatullah of your time.

In this present era, we are witnessing extraordinary days of Ramadan, whereby it is Ramadan everyday of our lives (that is, the believers in the Divine Manifestation) for we have got the unique opportunity to live ISLAM as in the times of the past elects of Allah, whereby Allah sends down His Holy Spirit and revelations and inspirations are spread through not only the Messenger of Allah of his time but also his pious disciples and believers who toil night and day to spread the message of Allah in all four corners of the world. Alhamdulillah.

Their everyday life becomes exceptional because it is not every day that a person comes to witness the presence of a Khalifatullah in his or her era and the descent of the Ruh-il-Qoudouss (Holy Spirit) along with him.

Surah Al-Qadr (Chapter 97) of the Holy Quran refers to this manifestation of divine glory, and I shall come back on this subject later on, Insha-Allah.

The month of Ramadan is a month which its first part is a mercy, its middle His (Allah’s) forgiveness and last (part), the liberation from the fires of hell. Anyone who lightens the burden of His (Allah’s) servants in this month, Allah will forgive him and free him of hell-fire. In this month, the believer should apply to accomplish four things excessively: two for the pleasure of His Rab (Lord) and two such that he cannot do without. Those which are for the pleasures of His Rab are: recite excessively the Kalima Tayyibah, that is: “Laa Ilaaha Illallah” and ask a lot for Allah’s forgiveness (Istighfar). And as for the two things that he cannot do without, these are: implore Allah for His Paradise and seek His protection against Hell.

It is reported that Hazrat Muhammad (saw) said during one of his sermons: “O people! The Month of Allah has come to you. The month which, in the eyes of Allah, is the most virtuous of the months. Its days are the best days; its nights are the best nights, and its hours (moments) the best hours (moments).”

Fasting is thus a complete purification for the believer and a means to develop his awareness of the presence of Allah. The recognition of the presence of Allah, the fear of Allah, that is, Taqwa, is a protection against the Satans and suffering in this very world. Allah informs us: “And whoever fears Allah, He (Allah) will open the path of deliverance for him. And will provide for him from where he does not expect. And whoever relies upon Allah – then He is sufficient for him. Indeed, Allah will accomplish His purpose. Without doubt Allah has kept a measure for everything.” (Quran 65: 3-4)

Deliverance from evils and to acquire a pure heart requires also much effort from the part of the Muslim. His life should be directed in accomplishing this goal, and to enter into the sight of Allah, gaining His pleasure. Thus, the first part of the month of Ramadan becomes a first approach for him to shed himself from the grip of the attractions of this world and to go in search of the mercy of Allah.

When he has got the attention of Allah on him through his efforts to please Allah, by performing all the licit and pure acts of worship as ordained by Allah, and by keeping away from the forbidden during his state of fasting, therefore the person gets to control his nafs (ego or carnal desires) and drives himself to a point of recognizing the greatness of Allah, His might and wisdom, while at the same time recognizing that he was a great sinner against his own soul.

The faster therefore seeks Allah’s forgiveness, pleading for this forgiveness to pervade his whole life, not only for forgiveness for past sins, but he realizes also that as man is weak and can fall prey to the temptation of the satans of this world, therefore he pleads Allah to become His mighty help against his own low desires and to forgive him for his mistakes at each step that he may take in life.

After his heart has got consolation in Istigfaar, the state of the believer progresses to another stage whereby he earns the pleasure of Allah whereby Allah grants him his prayer and becomes his Shield both against his inner satans and those of the outside world but Allah also become his shield against the hellfire, provided that all through his life, from the moment he has made his blessed intention to reform himself to the moment of his death, he has observed the commandments of Allah and abide by his silent promises to Allah as it should have been observed. Therefore, hell becomes a forbidden territory for him.

Therefore, the three parts of the month of Ramadan are actually a representation of the life of the believer, for it is a guideline as to what he should make out of his life so that he may earn both the pleasure of Allah and the protection against all evils and hell…”

The video of the Full Sermon is available @: