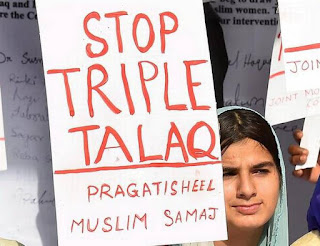 In recent years, Muslim women in India have publicly raised issues of unfair treatment at the hands of their unjust husbands, triggering wider debates on the reform of Muslim personal law in a secular country. As it happens, an unscrupulous husband  makes an oral pronouncement or a simple declaration of 'Triple Talaq’ by sending an e-mail/mobile phone text message/WhatsApp/Facebook/Twitter posts, etc.- to his wife and such a communication would apparently result in instant and irrevocable divorce, valid for the purpose of the Muslim law.  For, ‘Talaq-e-Bidd’at’- an irregular form of divorce under Muslim Law- does seem to allow men to simply evade their marital obligations with their wives and to end the spouse relations without any regard for the ethical framework of the Qur’an and the Ahadith on matrimonial justice. Indeed, a grave distortion of the Islamic institution of divorce has been created in recent times by rotten husbands, leading to an unfortunate public perception that a Muslim husband may put away his wife at his mere caprice. Seeking to prohibit and penalize this kind of deviant practice -‘Talaq-e-Bidd’at’- that is tilted against Islamic values, women’s rights and gender justice;  India recently announced a new national legislation entitled the ‘Muslim Women (Protection of Rights on Marriage) Act, 2019.

'Talaq': Elements of a valid process


Under the traditional Muslim personal law, divorce is classified into three categories: (i) ‘Talaq’: a means of divorce, at the instance of the husband. (ii) ‘Khula’: a mode of divorce at the instance of the wife. The third category of divorce is ‘Mubaraat’ – divorce by mutual consent. A valid process of divorce at the instance of the husband would entail a pronouncement of ‘Talaq’ by the husband, followed by a period of abstinence. The period of abstinence is described as ‘Iddat’. The duration of the ‘Iddat’ is ninety days or three menstrual cycles (in case, where the wife is menstruating). Alternatively, the period of ‘Iddat’ is of three lunar months (in case, the wife is not menstruating). If the couple resumes cohabitation or intimacy, within the period of ‘Iddat’, the pronouncement of divorce is treated as having been revoked. Therefore, the process is calibrated and is revocable. Conversely, if there is no resumption of cohabitation or intimacy, during the period of ‘Iddat’, then the divorce becomes final and irrevocable, after the expiry of the ‘Iddat’ period. It is considered irrevocable because, the couple is forbidden to resume marital relationship thereafter as the marriage stands dissolved.

Validity of 'Triple' Talaq: The Role of Colonial Judges

Apart from this valid form of divorce or ‘Talaq’; a deviant form of ‘Talaq’- Talaq-e-Bidd’at- is also prevalent among segments of the Muslims in India and elsewhere. ‘Talaq-e-Bidd’at’ is effected by one definitive pronouncement of ‘Talaq’ such as, “I Talaq you irrevocably” or three simultaneous pronouncements, like “Talaq, Talaq, Talaq”, uttered at the same time, simultaneously. In ‘Talaq-e-Bidd’at’, divorce is effective forthwith. The instant Talaq, unlike the other regular categories of ‘Talaq’ is irrevocable at the very moment it is pronounced.

The British judges of colonial India who developed the Muslim Personal Law in the country through a century of judicial interpretations of Islamic classical texts often failed to understand the true Islamic rulings on divorce and they have distorted the big picture through their erroneous interpretations of the Shariah. Regrettably, these judges had created an unfortunate but popular fallacy that ‘a Muslim male enjoys unbridled authority to liquidate the marriage and that a husband can effect a divorce whenever he desires’; whereas the Qur’an prohibits a man from divorcing his wife so long as she remains faithful and obedient to him, 'when they (namely, women) obey you, then do not seek a way against them' (Surah An-Nisa, verse 34).

“If ye fear a breach between them twain, appoint two arbiters
One from his family, and the other from hers;
If they wish for peace, God will cause their reconciliation:
For God hath full knowledge, and is acquainted with all things.” (4:36)

Put in other words, when the relationship between the husband and the wife is strained and the husband intends to give 'Talaq' to his wife he must chose an arbiter from his side and the wife an arbiter from her side, and the arbiters must attempt at reconciliation, with a time gap so that the passions of the parties may cool down and reconciliation may be possible. If ultimately conciliation is not possible, the husband will be entitled to give 'Talaq'. Hence, the 'Talaq' must be for good cause and must not be at the mere desire, sweet will, whim and caprice of the husband, and it cannot be effected in a single sitting by the husband acting alone.

The new law in India

Like in many Muslim nations in recent times, the new legislation in India also prohibits ‘Talaq-e-Bidd’at or any other similar form of Talaq having the effect of instantaneous and irrevocable divorce pronounced by a Muslim husband’. According to Section 3 of the Act, ‘any pronouncement of such Talaq by a Muslim husband upon his wife, by words, either spoken or written or in electronic form or in any other manner whatsoever, shall be void and illegal’. In short, under the new law, the validity of the pronouncement of ‘Talaq’ thrice in one sitting by a Muslim man-‘Triple Talaq’- has been nullified and declared as not enforceable in law as devoid of any legal effect, and illegal.

The Act makes the declaration of ‘Talaq-e-bidd’at’ (or any other similar form of Talaq’) a cognizable offence- the kind of offence whereby an accused can be arrested by the police without warrant-, attracting up to three years’ imprisonment with a fine. The relevant provision reads:

“4. Any Muslim husband who pronounces Talaq referred to in section 3 upon his wife shall be punished with imprisonment for a term which may extend to three years, and shall also be liable to fine.”

Under section 7 (a), the offence will be cognizable only if information relating to the offence is given by: (i) the married Muslim woman (against whom Talaq has been declared), or (ii) any person related to her by blood or marriage. Under section 7 (c) of the Act, the Magistrate may grant bail to the accused, only after hearing the Muslim woman (against whom Talaq has been pronounced); and if the Magistrate is satisfied that there are reasonable grounds for granting bail.

The beneficial/welfare legislation clarifies that a Muslim woman against whom Talaq has been declared, is entitled to seek subsistence allowance from her husband for herself and for her dependent children.  The amount of the allowance will be determined by the Magistrate (section 5).

Likewise, under section 6, a Muslim woman against whom such Talaq has been declared, is entitled to seek custody of her minor children. The manner of custody will be determined by the Magistrate. 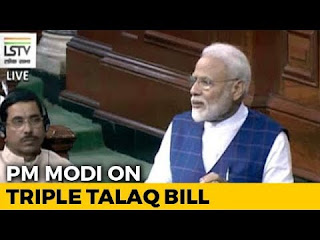 While the passing of the new legislation in the Parliament has been hailed by the Prime Minister Narendra Modi as a historical moment, several leading social activists -including women’s rights activists- have questioned the effectiveness of the approach preferred in the legislation. Critics point to several disturbing elements- both in the law-making process and also in the substantive provisions of the new legislation. Had the government routed the legislation through the well-established Parliamentary Legislative Committee system, democratic deliberation and a process of effective consultation could have reasoned out many of its current infirmities. For instance, the imprisonment of a husband as a legal punishment is riddled with practical problems for the Muslim wife for whose protection the law is made for. In the everyday dynamics of the family system in the country, the woman complainant who invokes the law will be at the mercy of her matrimonial family. For, a family could potentially turn hostile towards the wife for complaining against the husband and putting him behind bars. It is also disappointing that the Act neither addresses nor concerns itself with the financial security of the woman and her children during the imprisonment of the husband.

It is also pertinent to note that ironically enough abandonment of wives is a much larger problem in India, especially among India’s Hindu women than for the country’s Muslim women. Yet, the current Government has done precious little to address the glaring gender justice question. So much for the professed political commitment of the government for women’s rights! 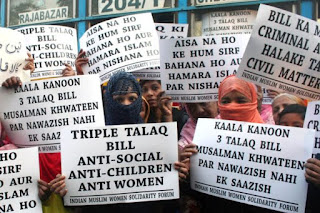 At a time when aggressive Hindutva chauvinism is on an electoral roll in the country, and the popular opposition is in complete disarray, the majoritarian steamroller is chipping away at the legal architecture for the institutional protection of individual rights in the name of nationalism and ‘Ma Bharti’ (Mother India). With every public institution being ideologically converted into ‘Hindutva’-friendly policies at every level, the nation’s foundational values, including constitutional liberty and the framework for institutional checks and balances are under severe strain. Minority communities, especially the Muslims, are being shown their space through the politics of hate and mob lynchings. Viewed against this rabidly anti-Muslim politics in the country today; the present dispensation’s policies vis-a-vis Muslim social issues require closer scrutiny.

It is pertinent to note that the Supreme Court of India has clarified in its landmark Shayara Banu judgement last year that Triple Talaq in one setting is devoid of any legal effect, and hence the wife is entitled to all the rights under applicable Muslim law even after such an empty pronouncement by the husband. Hence, there was no overriding necessity for imposing such harsh punishment (that itself is open for abuse) on a Muslim man for his legally-harmless pronouncement. In seeking to ‘weaponise’ family law by introducing criminal sanctions on civil relationships among the Muslims, the legislation is going in unchartered waters where no family law has ever travelled in the country so far. Is the nation ready to invoke criminal law on the marital home and divorce-issues of all communities, or only on the Muslims?


Whereas the government is doing nothing to deal with the larger, secular issue of abandonment of wives across all communities, it has come out with a Muslim-centric legislation riddled with problems and ineffective solutions. Indeed, the new legislation seeks to criminalise Muslim men in the guise of protecting Muslim women at a time when the beleaguered community has a disproportionate share of its population already in the nation’s prisons. Whether the law’s life will be a progressive one or will it become yet another oppressive tool to intimidate and break up Muslim families in the Indian society?  The jury is out!
Email ThisBlogThis!Share to TwitterShare to FacebookShare to Pinterest
Labels: India, Islamic law, justice, minority rights, Muslims, Narendra Modi, talaq, women
Newer Post Older Post Home