'Surah An- Nasr': A Commentary 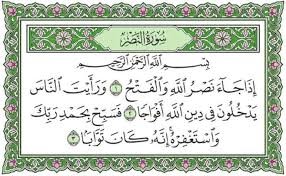 1. In the Name of Allah, The Most Gracious, The Most Merciful.
2. When comes the Help of Allah, and Victory,
3. And you see the people entering into the religion of Allah in multitudes,
4. Then celebrate the praises of your Lord, and pray for His Forgiveness: For He is ever ready to accept repentance (of His servants). (An-Nasr, 110: 1-4).

This beautiful chapter was the last to be revealed to the Holy Prophet Muhammad (pbuh). It was revealed approximately some months before his demise. The revelation of this Quranic chapter happened either in Mecca when he went to accomplish his last Hajj or in Medina when he returned. Victory is the result of the accomplishment of a supreme and final duty and it is also a result of our foremost duty to Allah, and thus we need to ever take it seriously. All victory can ever become possible only with the mighty help of Allah.

The help of Allah and victory are ever near for him who is always righteous and good! When the soul attaches itself to Allah and His Messenger, and it unites with others who have faith, therefore, come what may, they fight against falsehood and the miscreants (Kafirs) with all their capabilities/ strength and they humbly carry the flag of faith and they march forward with certitude towards victory; such victory which comes from Allah only. It is to Allah that we need to seek help and it is verily Him who comes to our rescue in all circumstances when we turn to Him with sincerity and it is Him who turns to us with His pity and mercy.


Through this Surah (Quranic chapter), Allah is giving us an indication that we need to remain loyal to His unicity, and that after acceding to victory, we need to maintain our faith come what may for it is Him alone Who is the Absolute Master and all depends on His will. We shall never succeed without the help of Allah. Therefore, when He helps us in our everyday lives, be it in our moments of difficulty or when we are undergoing trials even in times of happiness, we need to always show our humble gratefulness to Allah and we need to always incline our hearts in submission to Him, with complete sincerity. We need to pray for His forgiveness, for all our sins. And when each time we are victorious, be it in our mundane lives or in our spiritual lives, we need to remember Allah always, be it in our happy moments or in our bad moments. We need to cultivate the habit to always say “Alhamdulillah” (Praise be to Allah) for all the favours and help which Allah extends to us and if a misfortune falls upon us, we need to say: Innal lillahi wa inna ilaihi raa-jiiuun (We belong to Allah and to Him we shall return (one day)).

In the Chapter An-Nasr which I have read before you, Allah revealed to the Prophet (pbuh):

The Holy Prophet (pbuh) had to leave Mecca to seek refuge in Medina due to the persecutions of the infidels and their plots to kill him. In Medina, all the truthful and wise people were with him and Allah reinforced their faith and initiatives with His power and they succeeded in fighting against the Meccans who united together to destroy him. When Allah opened his way to a mighty victory in Mecca, then little by little all Arabia submitted to Islam. The Conquest of Mecca was the final result of the years, days and seconds of patience when he (pbuh) spent ever since Allah honoured him with the mantle of prophethood. Allah honoured His promise towards His beloved prophet and after the conquest of Mecca, the tribes and Arabia as a whole submitted to the unicity of Allah and the message of Islam even went as far as the four corners of the world.

The lesson that we need to draw from these verses is that what really counts is not vanity which a person can develop at the time of victory or success, but on the contrary, he needs to show himself humble and offers his service to humanity as a whole, because the goal of a true Muslim is to obey all the commandments of Allah and His prophet and maximise his efforts to please Allah and to realise (i.e. attain to) Allah in this very world. When he serves the people, he is verily doing that for the good of his own soul because in each person there is the essence of Allah.

Verset 4: Fa-sabbih bi-Hamdi Rabbika wastagfirh. Inna-Huu kaana Tawwaabaa. - Then celebrate the praises of your Lord, and pray for His Forgiveness: For He is ever ready to accept repentance (of His servants).

Each person must humble (humiliate) himself before Allah and confess to all his weaknesses and he need to seek the grace of Allah, while at the same time attributing the fruit of his work to Allah alone and not to his own efforts. It is verily Allah Who has manifested His goodness and mercy towards that person. As for the Prophet of Allah (pbuh), he had another honourable duty which he needed to accomplish: To pray for the grace and forgiveness of his people, if ever someone among them had committed a wrong during the times of victory. Allah through His sheer grace gives us His favours and forgives us for all our sins and He gives us His protection without being coerced to do so. But He does it through the Mercy which He reserves for His creatures. Without His help, we would never ever be (or have been) victorious. As the servants of Allah, we need always implore Allah for His forgiveness for all our faults with the firm resolution that we shall never return to them again. Insha-Allah.


May Allah help us to ever show ourselves grateful to Him for all the favours which He has bestowed upon us, and that Insha-Allah, in all the victories which we gain for His cause, may we always act humbly and without pretention, with the blessings of Allah. Insha-Allah, Ameen.