Qur'an on the Human Condition 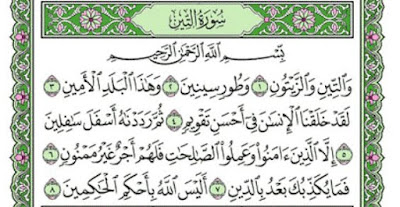 “In the name of Allah, The Most Gracious, The Most Merciful; By the Fig and the Olive, And the Mount of Sinai, And this City of security; We have indeed created man in the best of moulds, Then do We reduce him to the lowest of the low, Except for those who believe and do righteous deeds, for they shall have a reward uninterrupted; Then what can, after this, contradict thee, as to the judgment (to come)? Is not Allah the Best of judges?” (At the end, we reply: Bala! Wa ana ala Zaaleka minash Shahideen - “Indeed, I am among those who witness to this (truthful reality)). (At-Tin 95: 1-9).

In the light of these verses, we see that all that which exists in nature has been created for the fulfilment of man in all aspects. Through divine revelations, we have learnt that Allah has created man in the best of moulds. And we have learnt also that man can also become worst than an animal, or he can perfect himself morally and spiritually in such a way that he reaches a high station and accedes to the presence of Allah. When he succeeds in perfecting himself, he reaches such a state where he is absolutely convinced of the unicity of God (Allah) and he realises that all that this world and the universe contain, and even himself, all belong to Allah. He thus makes much effort to please Allah and come near to Him. When he makes such efforts to accede to Allah, he cultivates love, respect and the fear of Allah (Taqwa) - in his heart; and all this helps him to come out of his animalistic state and become moral and spiritual.

When he finds himself in the state where he develops and maintains morality, he develops an excellent character where he acts with goodness and wisdom and he accomplishes such actions as to help him attain his goal. Nobody besides Allah knows his heart and he cannot hide anything from Allah, and on the Day of Judgement, it is Allah, The Most Wise, and the most Just of all judges - the best Judge - Who shall judge him. If he had no sincerity in his heart and used to do (good) deeds only for the eyes of people, then his punishment shall be grievous and painful for him. But if he was sincere towards Allah and had a pure and clean heart, then his value before the eyes of Allah shall increase and his reward shall be good and eternal (for him to enjoy).

'Freewill' and the Diverging Paths

Allah has given us - mankind - the freedom to choose our paths, i.e., freewill. We can either choose to attach ourselves to this temporal world and become worse than an animal, or we have the choice to forego the attractions of this world and attach ourselves firmly to Allah, whereby we choose to go forward for the moral and spiritual progress of our souls so as to reap Allah (as reward). We shall attain to such high degree of morality and spirituality only by obeying Allah completely and when Allah shall manifest Himself at any time, any hour, we need to grip firm to the rope of Allah and follow His instructions and His guide (and/ or guidance) so that Allah may be pleased with us and we also be pleased with Him (Allah).

Exalted status of the Humans

Man has been bestowed superiority to an animal. Man has the power of reasoning and he has the capacity to take a decision whereas an animal relies only on its (basic) instincts. Therefore, man should use that (God-given) capacity - i.e. his reasoning power/ his intelligence - to take the decision to leave his animalistic state and progress further to reach the stage of purity, morality and spirituality.


This process cannot be accomplished in one second or one minute or even one day. This process is a gradual one (little by little when he takes conscience of the divine presence and he acquires absolute certitude, without the least doubt to cloud his (faith and) judgement that Allah is indeed One, Unique.

The essence of this Surah (Quranic Chapter) is found in its verses 5-9 and it puts forward (an oath) which contains 4 sacred symbols, i.e., Fig, Olive, Mount Sinai and the City Sacred of Mecca. The interpretation of the first symbol, i.e., Fig is as thus:

(a) Fig. If we consider the word Fig literally as being the fruit, or the tree which bears its fruit, the same symbol (i.e., Fig) can represent the destiny of man in many aspects. If it is well cared for, it will grow properly, and bear the best of fruits, much more delicious and nourishing than the other fruits.

When its fruit (the Fig) is in the wild or uncared for, its seed is very small, and can attract many pests. Likewise, man can build for himself a good destiny if he knows how to make shine all that is good in him. But if he follows all the bad found in him, he becomes such an abased and disgusting creature and his state deteriorates to such an extent that he becomes worst than an animal (whereby we can say that an animal is much better than him!).

It has been reported that to make the people understand this lesson, Jesus (as) had cursed a Fig tree which only had leaves and did not bear any fruit. (Matthew 21: 18-20).

(b) And by the Olive. The olive is a sacred symbol and we find that in chapter 23, Al-Muminuun, Verse 21 in the Quran, Allah has enabled the growth of such fruit (i.e. the Olive) on Mount Sinai which produces the best oil and which has an exceptional taste and perfume.

In Surah An-Nur also (Chapter 24, Verse 36), Allah gives a parable, whereby the divine light is linked with the Olive, and the Olive tree has been mentioned as being a sacred tree, the fruit thereof, its oil is enlightened as a bright star and which shall never stop shining, for it belongs neither to the East nor to the West (countries wise and direction wise). That light may refer to the light of the Quran which has come down as the revelation par excellence to the Holy Prophet (saws) and it is that same Book which is a guide, not just for a single era, but for all times to come till the Day of Judgment and its teachings are universal teachings which are applicable for all that is found on earth and everywhere where its light reaches.


As the explanation of this Surah is really long, Insha-Allah, I shall continue to expound on its commentaries next Friday. May Allah help us all to understand well these explanations so that the essence of the parables of Allah as He taught to us in the Quran, and especially in this Surah, helps us to perfect ourselves morally and spiritually so that we succeed in coming out from the animal state and progress more and more towards perfecting our souls, and in this way we come nearer to Allah, more than before. Insha-Allah, Ameen.