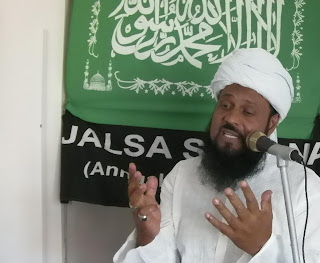 The Holy Quran affirms that it is a ‘Guide’, a ‘Direction’, only for the pious, the beneficent, the righteous. Not for others who are not pious or righteous, who do not put into practice what Allah says in the Holy Quran, (those) who read the Quran just like parrots, only on the lips and do not understand anything (of the Quran). For those people who are Muslims only in names, then the Holy Quran does not apply to these kinds of people. The righteous are those who already believe in the existence of God, although they cannot see Him, who already ‘raise and straighten’ the Salat, those who already observe fasting, already spend in the cause of God from among the goods granted to them, and they already believe in the truthfulness of the Quran and other scriptures revealed before the Quran (2: 3-5).

If, as you can see, these righteous have already taken the right path, what does this Quranic statement may well mean? At what level yet again, the Quran is able to elevate them? Before grasping the answer, it should be understood that in spite of their faith in God and the good works they practice, these righteous people are just not satisfied with their condition, they feel a strong desire to show yet more rigour, more effort to perfect their firmness in faith and to advance to the final point (summit) of spiritual progress. To achieve this, the human effort, by itself proves to be totally ineffective. The intervention of God, the Only One who can help them is absolutely necessary.

Being ‘strong and steadfast in the faith’ describes the state of the believer when he is so enamoured of faith in God, no trial can make him falter or succumb. In this state, righteousness itself changes appearance; in fact, the exerted effort, the repugnance or disgust typically experienced when one must make pious deeds disappear completely, and now effort is no longer necessary. Therefore, like food, pious works will feed the soul, and without them, the soul perishes in some way. This firmness in faith, obviously superhuman is beyond the scope of human effort, and cannot be acquired through the deeds (of efforts) of the latter. Like the soul, such firmness and endurance is a gift, a grace which is granted by God solely. The culmination of spiritual development is that beyond faith in God and worship practices, which are ultimately the ultimate outcome of human effort, one reaches a state that is in itself a gift of God.

Take the case of faith in God; in this field all you can expect from the exercise of reason, is that it leads us to believe in God, in spite of the fact that we cannot see Him. In other words, human reason exerted to its maximum shall at the most lead us to believe in God, the Being that we cannot perceive. We know that God does not overcharge someone (or requires something of someone which he cannot accomplish) beyond his capacities. Allah does not force anyone to acquire by his own effort, something bigger, more advanced than faith in God. However, the phrase/verse, ‘It (i.e., the Quran) is a Guidance for the righteous’, contains the promise that when the belief of the righteous in the reality of the hidden world would firmly be rooted in him, then Allah Almighty will make him advance from the step of faith to that realization (of Allah) and gnosis, and at that moment, Almighty Allah will clothe his faith with a new form. As I said at the beginning of my sermon, in that sphere of faith in God man by himself can at best develop faith in a Being that he cannot see, a Being whose existence is attested by all the atoms in the universe.

Man cannot, by his own transmute into gnosis the faith which he has in God. In the practice of prayer, too, what we can acquire through human effort remains confined within well-defined limits. Here, as for the scope of the effort, the worshiper, physically and morally pure, and preserving himself from anything that can distract or divert his attention, will strive to practice prayer of one devoid of passive manner, in order that all the components of prayer, especially, asking forgiveness of God, praying to God to bless the Holy Prophet (pbuh) – that is the Darood Shariff, repentance, praise, glorification and supplication emanate from the depths of his heart.

However, it is beyond his power to acquire this concentration and sustained and living attention in the Salat, which shall sign the existence of a state of sublime purity, of a love and a sign of superhuman devotion and erasure of the self (nafs), as if the worshiper saw God face to face. It is clear that prior to this, prayer was not perfect. Moreover, it is right that the Quran uses the expression ‘those who raise and straighten’ (the Salat) because we raise and straighten only that which has fallen. Therefore, we call ‘righteous’ that someone who, reassembling his concentration and attention, uses all his strength to ‘raise and straighten’ the Salat. However, human effort, without the help of God’s grace, is not enough to get the desired result.

Therefore, God, the Merciful and Bountiful, has promised: “This book is a ‘Guide’ for the righteous.” In this sentence/verse and God thus reassures the righteous: “They should strive to the best of their ability with righteousness, to raise and straighten the Salat. If they have faith in My word, I will not forsake them in their efforts, but I will take them by the hand, and I shall guide them Myself (to the place where they shall be filled with bliss). From then on, their prayers change form, and they shall taste of something whose existence escapes them now. I will blessed them with it because they strive to the best of their ability, to put into practice the teachings and guidance of the Holy Quran.”

So the something more that the Holy Quran promises to the righteous concerning the Salat is acquiring this degree of love, zeal, devotion and concentration which shall enable the righteous to perceive the radiant beauty and light of his Beloved, the Eternal Lord. In this new spiritual state, saturated with bliss and ecstasy, the worshiper feels disgust for worldly impurities, sins or weaknesses coming from words uttered, deeds, sight or hearing, that without any effort and naturally, he rejects and remains far away from these.

As Allah the Most High says in the Holy Quran, “Surely Salat (prayer) safeguards against indecency and reprehensible actions.” (29: 46)

Even if he lives in a hut, the righteous can find true happiness, but on the other hand the lustful, dominated by lust and greed, cannot get it even if he wallows in beautiful and magnificent palaces. Therefore the more one possesses and strives to get earthly possessions; the more one has to cope with difficulties and hardships. Therefore, it is not in the destiny of the lustful to find true happiness.

Never imagine that opulence, gorging on fine cuisine or adorning yourself in chic clothing can offer you true happiness. Never! Verily, the real source of true happiness is righteousness. May Allah help you all my dear disciples to keep these valuable advices in mind. Allah and His Khalifa, the Khalifatullah want your happiness and undeniably your true happiness is Allah alone. Seek the help of God to perceive God Himself, and the best way to this achievement is Salat (the obligatory prayers) that is made according to and after receiving illumination from God (Allah) Himself. Insha-Allah.